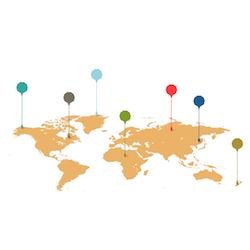 When It Comes to Health Rewards, It Seems the World Is Flat

Health Reward Programs Throughout the World

Health Reward Programs Throughout the World Ten years ago, rewards for healthy behavior barely existed in the United States and certainly were not prevalent throughout the world. When we founded IncentOne and started talking to the healthcare community in the mid-2000s, reward programs in healthcare consisted of discounted gym memberships and perhaps a $25 gift card for participating in a maternity program or completing a health risk assessment. Ten years later, consumer rewards for patient behavior and rewards for providers have become a cornerstone to any effective patient or provider engagement strategy.

This was largely driven by the private sector, as self-insured employers and health plans that bore the risk of poor consumer health and heath choices.  Today, 74 percent of employers use health reward program, 93 percent expect to increase their spending on rewards over the next three years and average reward values have increased from $260 in 2009 to $594 in 2013.

The public sector in the United States has been catching up, slowly but surely.  2008 brought us what is known as the E-prescribing Incentive program that rewarded providers for e-prescribing.  In 2011 came the Medicare/Medicaid EHR Incentive Program that rewarded (and ultimately penalized) the “meaningful use” of electronic medical records. Finally, in May 2014, CMS promulgated regulations expanding the use of rewards in Medicare, removing the long-standing $50 per year and other significant limitations.  Needless to say there is not a sector of the US healthcare community that is not deploying rewards as part of their overall engagement strategy.

But what about across the globe?  Until recently, with the exception of South Africa, health rewards were few and far between. However, in the last year, countries with all types of health systems – pubic, private and mixed – are deploying health rewards.  Even less developed countries have been using health rewards.  Many countries have developed multi-year strategic roadmaps to fix their healthcare systems and in each case the roadmap includes as one of its key tenets the use of financial rewards for patients and providers. In the end, whether the risk and cost is born by the private sector or the public sector, the world has come to realize what we now know here in the US – without financial rewards it is difficult to engage patients and providers to change behavior.

UK employers have even gotten in the mix.  http://dld.bz/dxMN4

Outside the developed world, rewards are being used as well, but often for more fundamental health services such as use of a national health system for births. These programs often, although not exclusively, take the form of Conditional Cash Transfers, or CCT. The following is an outline of some of these efforts in the developing world:

China has even gotten on board – although not exactly rewarding for healthy behavior. Kaohsiung residents will be able to turn pests into positivity, as the city plans to reward those who have caught the most mosquitoes by Saturday. “Instead of fining people who fail to remove standing water and other breeding sites around their homes, we think this program could raise greater community participation,” said Ho Hui-ping, chief of the section in the Health Department responsible for the campaign. The No. 1 mosquito keeper will be rewarded NT$3,000 (US$100), while the top 10 contestants will each be given free bug spray and mosquito nets, according to Ho.

Regardless of the country, it comes down to consumer behavior. While in many systems there are economic reasons for consumers to act, the bottom line is that like the US, with every consumer facing initiative, rewards are key.  With healthcare, the behavior we are looking for them to take is far more complex than in the airline, hotel, retail or credit card industries. Is it just a matter of time before every country has a health rewards program to drive consumer behavior?