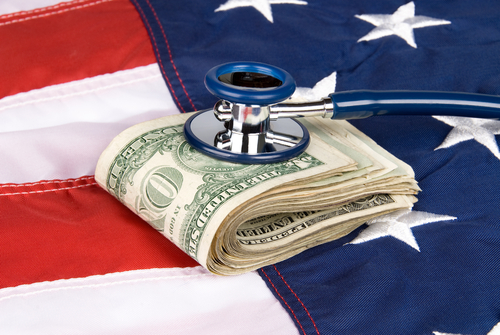 Will the Federal Government Bankrupt the States? State budgets are still under stress because revenues are not growing fast enough to replace the funding from the federal stimulus program. And now states are being pressured to expand Medicaid.

State budgets are still under stress because revenues are not growing fast enough to replace the funding from the federal stimulus program. And now states are being pressured to expand Medicaid.

According to the National Association of State Budget Officers, Medicaid will account for 23.9 percent of total state expenditures in fiscal 2012. In most states, able-bodied working age adults are not eligible for Medicaid. One of the pillars of ObamaCare was the provision requiring states to either expand Medicaid to everyone with incomes up to 133 percent of the federal poverty level (plus a five percent income set-aside) or lose all of their federal matching funds. This provision was struck down by the Supreme Court.

But state governments are still being pressured to expand Medicaid, even though estimates suggest that more than 25 percent of people in the expansion group have private health coverage and that a sizeable fraction of them are college students. The federal government promises to pay 100 percent of Medicaid medical costs for the first three years of the expansion, and 90 percent of them in 2020 and thereafter. A variety of interest groups think that it would be a shame to leave this “free” money on the table.

Responsible state fiscal agents face three major problems in deciding what to do.

First, the cost of their existing Medicaid programs is likely to grow substantially as people who are already eligible but not enrolled sign up to avoid federal penalties for not being covered, and as private employers shrink their health insurance offerings for part-time workers. This cost has to be paid by the state.

Second, the federal government can always change the Medicaid matching rate once states have expanded their Medicaid programs and rolling back Medicaid expansions is politically difficult for state governments. The Obama Administration has already proposed reducing the federal match. If it does this after states have expanded their programs Drew Gonshorowski of the Heritage Foundation estimates that state spending will increase by $120.2 billion a year.

…The increasing expenditures in both the Social Security and Medicare Part A programs, residual stimulus spending, employee tax cuts under consideration and the potential costs of health care reform along with the interest costs to finance U.S. government borrowing will take up an increasingly large amount of the federal revenue streams. Without significant federal revenue increases or potentially unsustainable federal borrowing, there may be large cuts in federal spending. In the absence of all or a significant portion of this funding, the State’s operations and ability to provide services to its citizens would be adversely impacted as would local government services.