Jacquie Scarlett, Wellpepper Director of Customer Experience, and I were some of the last people to get full genomic testing using the $99 personal genomic testing kits from 23andMe before the FDA “cease and desist” letter on November 22, 2013. We had sent in our saliva samples and were waiting for results, when the following letter was published by the FDA.

Jacquie Scarlett, Wellpepper Director of Customer Experience, and I were some of the last people to get full genomic testing using the $99 personal genomic testing kits from 23andMe before the FDA “cease and desist” letter on November 22, 2013. We had sent in our saliva samples and were waiting for results, when the following letter was published by the FDA.

WARNING LETTER
Dear Ms. Wojcicki,
The Food and Drug Administration (FDA) is sending you this letter because you are marketing the 23andMe Saliva Collection Kit and Personal Genome Service (PGS) without marketing clearance or approval in violation of the Federal Food, Drug and Cosmetic Act (the FD&C Act). Read the full letter here.

What was fascinating to us about the letter is that it hinted pretty clearly to the strategy of 23andMe: try to ignore the FDA as long as possible. The letter references many prior letters and meetings during which 23andMe had apparently made some promises to get back to the FDA but didn’t. Many health and technology writers commented that the strategy was in keeping with both Silicon Valley arrogance and modeled after Google’s belief that data trumps all. They posited that 23 and Me was racing to get to the magic 1 million record number at which point their data alone would prove whether the tool provides valid genetic results so that they would not get bogged down in what are usually lengthy FDA approval processes. While it does make sense for a start-up to try to avoid the FDA route if possible based on their technology and business model, 23 and Me is definitely well-funded enough to survive an FDA approval process. And, they’ve been having these conversations with the FDA for 5 years, which is actually enough for some FDA approvals to get through.

[M]ore than 5 years after you began marketing, you still had not completed some of the studies and had not even started other studies necessary to support a marketing submission for the PGS.

The letter calls for 23andMe to discontinue marketing the PGS until it receives FDA marketing authorization.

There’s a saying that if you’re not paying, you’re the product. It seems that this can be true even if you are paying, or if what you’re paying, for example $99 is such a nominal amount that it doesn’t cover the full value you are receiving, or when the value you are providing the organization, for example, your DNA or buying habits is the most valuable of all. After this FDA letter and related editorials were published, we waited to see what would happen. It took 6 days from the time of the FDA letter for 23andMe founder and CEO Anne Wojciki to send a letter to paying customers to explain what was going on, and that letter really did not say anything at all. This is the type of letter that PR and legal typically send within 24 hours of an incident: we know there’s an issue and we’re working on it. 6 days later, it felt like too little to late for us to believe they really cared about us as consumers. (Contrast that to last week when New Balance sent  a number of customers, including me, some erroneous emails and had corrected them within an hour and also had updated their call center line.)

I wanted to reach out to you about the FDA letter that was sent to 23andMe last Friday.

It is absolutely critical that our consumers get high quality genetic data that they can trust. We have worked extensively with our lab partner to make sure that the results we return are accurate. We stand behind the data that we return to customers – but we recognize that the FDA needs to be convinced of the quality of our data as well.

23andMe has been working with the FDA to navigate the correct regulatory path for direct-to-consumer genetic tests. This is new territory, not just for 23andMe, but for the FDA as well. The FDA is an important partner for 23andMe and we will be working hard to move forward with them.

I apologize for the limited response to the questions many of you have raised regarding the letter and its implications for the service. We don’t have the answers to all of those questions yet, but as we learn more we will update you.

I am committed to providing each of you with a trusted consumer product rooted in high quality data that adheres to the best scientific standards. All of us at 23andMe believe that genetic information can lead to healthier lives.

Thank you for your loyalty to 23andMe. Please refer to our 23andMe blog for updates on this process.

A full 15 days later, we found out that since we’d purchased our kits before the November 22nd letter from the FDA, we would receive both genetic and ancestry results.

“If you are a customer whose kit was purchased before November 22, 2013, your 23andMe experience will not change. You will be able to access both ancestry and health-related information as you always have.

So first off, they didn’t have the most basic customer targeting capabilities to determine when I purchased to send a more personalized letter, and it doesn’t seem like any concessions were made to people who would only be receiving half of what they paid for as they received the same letter. When we signed up for 23andMe we did know what we were getting into: they are a start-up with some pretty lofty aspirations. However, this experience made it pretty clear that the consumer is not the customer for this company. That said, would we do it again? Yes. The process, whether 100% accurate or not has been extremely interesting. Our next blog post will talk about 1. the things we learned. 2. how 23andMe drives a highly sticky and engaging experience for end-users. We’ll also touch a bit on the ethical aspects and how this type of testing can help and also create potential risks for the empowered patient. 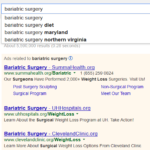 Why Every Hospital Should Be Doing Search Engine Marketing
Next Article #CES2014 and #JPM2014: Disparate Meetings Addressing Healthcare’s Future