Over the past ten years both college and medical school tuitions have increased in some cases four times. This has effected college graduates and physicians. Tuition at the state run UC system in 2001-2002 was $ 3429 and has risen to  $13,200 per year. This places an extraordinary debt burden on students at a time when they have little income. 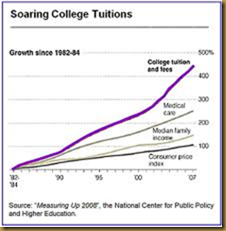 In California which has faced the perfect storm of decreasing revenues in the face of economic distress Chris Occasion, President of the FixUCR movement at the University of California presented a manifesto

Their manifesto is the UC Student Investment Proposal, which calls for eliminating the upfront costs of college and having working graduates pay 5 percent of their salary back to the system for 20 years.

The idea was conceived by students, and although designed for the UC system could very well be adapted to  other states and private universities.

The investment proposal concept has captured the attention of the Board of Regents of the UC system and was a concept previously studied and discussed by Robert Reich former Secretary of Labor under the Clinton Administration. He presented a similar idea in 2008 for California’s  mounting fiscal stresses. Economists at the time termed the financial plan feasible however it was deemed politically undoable. This would not be the same for privately funded schools of higher education.

A similar perfect storm has developed in health care and medical education which is even more expensive and extended eight years up to twelve years. And while college graduates may complete undergraduate education with a $100,000 debt load, some physicians will  exit from medical student andtraining with up to $ 250,000 debt.

Many well qualified students rule out medicine as a career because of it’ prospect of prolonged poverty and what often appears to be insurmountable debt. Some highly qualified  students will change career goals