ICD-10 implementation has been called medicine’s perfect storm. Between the deadlines for Meaningful Use (MU) Stage 2, ICD-10, and other health IT requirements, it’s not surprising many are looking ahead to ICD-11 with trepidation.

ICD-10 implementation has been called medicine’s perfect storm. Between the deadlines for Meaningful Use (MU) Stage 2, ICD-10, and other health IT requirements, it’s not surprising many are looking ahead to ICD-11 with trepidation.

ICD-9, or the International Classification of Diseases Revision 9, was released by the World Health Organization (WHO) in 1979. The United States’ version, adopted twenty years later as ICD-9 CM (Clinical Modification), has 17,849 procedure and diagnosis codes. The WHO’s Forty-third World Health Assembly endorsed ICD-10 for release in 1990, and it came into widespread use by WHO member countries in 1994. A Technical Advisory Panel, with guidance from the Centers for Medicaid and Medicare Services (CMS), WHO, CDC, physician groups, clinical coders, EMR vendors, and other stakeholders, has been developing the US provider versions, ICD-10-CM and ICD-10-PCS (Procedure Coding System), with 141,747 combined codes, for the last twenty-four years. 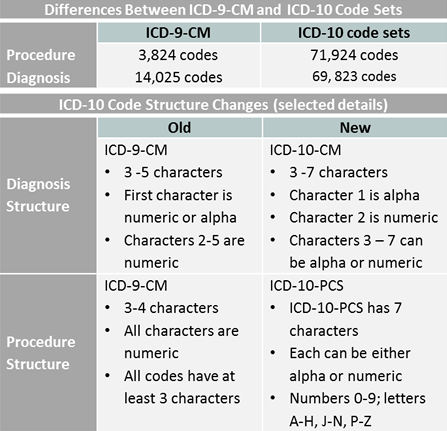 ICD-10-CM and ICD-10-PCS have had a long road to implementation that started back in 2009. The original deadline for adoption was scheduled for Oct. 1, 2013, which was then pushed back to Oct. 1, 2014, and is now set for Oct. 1, 2015. These delays aren’t entirely surprising, if you consider that according to 2012 census data from the Federation of State Medical Boards (FSMB), and a 2012 Physician’s Foundation Report, nearly half of US physicians received their medical licenses before ICD-10’s release. That means they have little familiarity with the new regulatory standard, which includes an eightfold increase in the number of codes. Trying to switch to this new system while simultaneously implementing MU Stage 2 requirements and penalties was always an ambitious goal.

The ICD-10 National Pilot Program, administered by the Healthcare Information and Management Systems Society (HIMSS) and the Workgroup for Electronic Data Interchange (WEDI), ran from Apr. 4, 2012 through Aug. 30, 2013. The program’s goal: “to assist the healthcare industry in its efforts to prepare for ICD-10 testing…[and] share best practices of, and lessons learned from, early-adopter/early-mover organizations.”

The program was an unmitigated disaster. Using a few hundred actual, anonymized medical records which represented some of the most common medical conditions and diagnoses, two hundred forty-eight highly qualified and well-studied volunteers coded the encounters using ICD-10 standards. This group of volunteer all-stars coded these records accurately only 63 percent of the time. Considering that correct coding is necessary for payments from Medicare, Medicaid, and insurance providers, a 37 percent loss of income could be a death knell for providers already struggling to maintain fiscal solvency in the current medical environment. Toss in the reduced Medicare and Medicaid payments for providers failing to meet MU Stage 2 deadlines, it is little surprise that the ICD-10 adoption mandate has been delayed once again.

Depending upon one’s perspective, it is either fortunate or unfortunate that Congress recently passed the Protecting Access to Medicare Act of 2014, prohibiting CMS from implementing ICD-10 before Oct. 1, 2015. For those who were ICD-10 ready, this delay means that the funds spent on training and support won’t see any return on investment for at least a year — a significant financial loss, both in opportunity and investment costs. For those unready, the delay means they have a year to try and get up to speed — or at least apply for a stay of execution.

Some industry stakeholders have wondered if moving to ICD-10 standards is the best course of action, since ICD-11, which entered public beta in May 2012, is scheduled for release by the WHO in May 2017. Considering the amount of time required to adapt WHO ICD-10 standards for the US healthcare market, waiting for ICD-11 could mean delaying increased specificity in medical coding for another decade or more.

Even though adoption of more-specific coding won’t come without pain, all stakeholders agree that increased specificity in diagnosis and procedure coding is important. Increased standardization and accuracy of data will help to prevent delayed or inaccurate diagnoses and procedures. Eventually, this is expected to reduce medical costs and increase positive patient outcomes. Delaying this initiative may help in the short-term, but it will only cost the American taxpayer and healthcare consumer more money in the long run.

MU Stage 3 guidelines are still under development, but attestation is scheduled to begin in 2017, the same year the WHO releases ICD-11. Barring any more Meaningful Use delays, it is unlikely the US version of ICD-11 will be ready before the Meaningful Use program is finished in 2021. As a result, it is unlikely there will be as much conflict surrounding ICD-11 implementation as has surrounded ICD-10. However, based upon the results of the ICD-10 National Pilot Program, it would still be wise to have a similar, but longer-running and larger program for ICD-11.

In short, the sheer amount of adaptation required from providers in 2014, including ICD-10, MU Stage 2, and acclimating to the Affordable Care Act, combined to become a “perfect storm” for healthcare providers. Asking too much and allowing too little time to comply is a recipe for disaster in any endeavor, but especially in the already complex regulatory environment that is the United States’ healthcare industry. ICD-11 implementation should go much more smoothly than ICD-10, thanks in part to the lessons learned from this debacle.