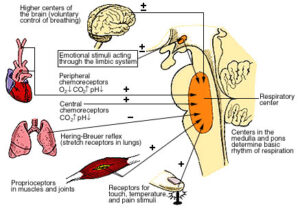 Finally, a Respiratory Monitor for Everybody

Have you ever wondered why is it that we can determine heart rate by simply placing a finger over the pulsing radial artery; or determine our blood pressure using a blood-pressure cuff; or even determine our O2 saturation using a pulse oxymeter; but we can’t easily obtain the information hidden in our breathing? The simple answer is that teasing out this information is just too difficult. Or, I should say, was too difficult. So, let’s drill a bit deeper into all those measurements.

What’s in a number?

Have you ever wondered why is it that we can determine heart rate by simply placing a finger over the pulsing radial artery; or determine our blood pressure using a blood-pressure cuff; or even determine our O2 saturation using a pulse oxymeter; but we can’t easily obtain the information hidden in our breathing? The simple answer is that teasing out this information is just too difficult. Or, I should say, was too difficult. So, let’s drill a bit deeper into all those measurements.

What’s in a number?

Because we can measure blood pressure so easily doesn’t mean that it is simple. The major factor in determining blood pressure is cardiac output; obvious, except that output in turn is determined by the stroke volume and heart rate, which in turn depends on… you get the idea: blood pressure is a composite of many physiological parameters. Yet we are content in measuring the integrated value of all those variables as expressed by the familiar numbers of systolic and diastolic Blood Pressure expressed in mm Hg. And the most powerful and physiologically relevant “computer” doing the complex calculations is none other than your brain, specifically the part of the brain stem called the medulla oblongata. Respiratory Centers of the Medulla and Pons (photo from cssforum.com)

Respiration is controlled by 4 centers, 2 in the medulla, and 2 in the pons, which sits on top of the medulla.

Without getting into the nitty-gritty of the functions regulated by each of those centers, suffice it to say that they get signals from the blood, primarily in the form of pH. But that in turn depends on the concentration of blood CO2, and that in turn depends on the rate and volume of inspiration and exhalation, as well as on the metabolic status of of the body; for instance, vigorous exercise raises the level of lactic acid, which gets converted to CO2. In addition, there are hormonal influences on the respiratory centers. When we are anxious, or stressed, epinephrine (aka adrenalin) levels go up and increase the ventilatory rate so as to supply more oxygen to the working muscles. These are all involuntary influences. There are also voluntary ones. For instance, doing yoga correctly calls for  slower and deeper breathing. Several studies documented the influence of such a voluntary pattern on the brain: it causes the appearance of theta waves, which are characteristic of deep relaxation and sleep states.

The main point here is that the breathing pattern is a product of complex interactions integrated by the the brain. The problem is that although we may know many of the factors that influence breathing, we don’t know them all. Just recently, a new group of neurons, discovered in the thalamus, were shown to send signals to the respiratory centers. So how can we integrate all those factors, known and unknown, into “a number”, a lá blood pressure? The simple answer is that we can’t. What the brain does so rapidly and reliably no computer can do.

I recently had the pleasure of meeting Nirinjan Yee, founder and President of BreathReserch Inc. She recently approached Health Tech Hatch for help in her campaign to crowdfund the development of her new device, the BreathAcoustics All-in-One Biometric Headset that, for the first time, captures respiratory parameters based on recordings of breath acoustics.

Her approach is quite ingenious: rather than laboriously classifying breathing patterns by observation and verbal description (inherently imprecise) she recorded the inhalation/exhalation sounds.

What immediately jumps to mind are the early days of blood pressure determinations. Until the early 1900s American physicians estimated BP by placing a finger on the radial artery. BP was estimated by describing radial pulses as ‘bounding’, ‘normal’, ‘weak’, ‘thready’. When the blood pressure cuff reached our shores from Europe, measuring blood pressure by sound (called auscultation) became more precise and accessible to nurses.

Unsurprisingly, there was resistance to adopting the method. A variety of reasons were offered: ‘not precise enough’, ‘variability of values from day to day’, ‘I’ve used my finger to assess pulses since I started in practice of Medicine, and nothing ever went wrong’. One reason was really striking: we cannot relinquish such an important measurement to a nurse (those were the days when it was Kosher to write it in medical journals).

Does it make sense to record breath sounds? Of course. The sound is related to the duration of the inhalation/exhalation cycle, to the force of respiration, to the pitch of the respiratory sounds, and to adventitious sounds, such as wheezing, sighing, etc. These parameters are invaluable in the diagnoses of a variety of clinical conditions. For example, the pitch, volume, and location in the respiratory cycle of bronchial asthma is different than the bronchiolar wheezes associated with lung disease. Indeed, Breath Research has amassed a database of over 10,000 recordings, including some patients with congestive heart failure, COPD, asthma, post-surgical, athletes at rest and in training, yoga practitioners, patients suffering from sleep apnea, to name a few. Obviously, to get a reliable sound-print of various conditions, both normal and pathological, a massive number of recordings will have to be collected and analyzed. But there are already promising beginnings. The group at the Dept. of Exercise and Sports Science, University of Wisconsin -La Crosse, tested the device on 20 healthy volunteers. The test consisted of 2 incremental maximal cycle ergometer exercise tests.  Breath sounds analysis was obtained from a microphone in the  breathing valve, using proprietary software, and included respiratory rate and sound intensity. Here are the conclusions of the study, presented at the American College of Sports Medicine:

A small study at the Sleep Lab at John Muir Medical Center in the San Francisco Bay Area consisted of simultaneous recordings of breath sounds using the BreathAcousics headset and the Phillips Respironics Air Pressure Monitor. The results of the recordings showed  impressive correlations between the two methods varying from 95.8% to 98.7%. Another impressive comparison is the cost of equipment: the Phillips Respironics cost thousands of dollars, the BreathAcoustics -a couple of hundred. The Phillips equipment can be used in sleep labs only, the breathAcoustics is completely mobile and can be used anywhere, anytime.

If I sound enthusiastic, perhaps overly so, it is because I sense that this simple gizmo will revolutionize the way we correlate respiration in all its manifestations with wellness and with disease states. It contains, in addition to the microphone recording breath sounds, a heart rate sensor and a pulse oximeter sensor. What’s there not to like?

Full disclosure: I have no financial interest in the company. I contributed to the BreathResearch crowds-funding campaign. My wife, Dr. Pat Salber, is CEO of HealthTechHatch.