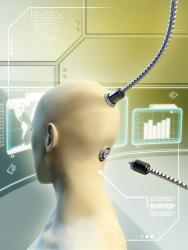 Can Stroke Survivors Recover Their Abilities by Controlling Virtual Reality Hands with Their Minds? More than two-thirds of stroke survivors have some type of disability, and for many, recovering the precise movements and use of their hands is the most difficult of all tasks.

More than two-thirds of stroke survivors have some type of disability, and for many, recovering the precise movements and use of their hands is the most difficult of all tasks. A team of researchers from the University of Minnesota has created a brain-computer interface, in which stroke survivors control a pair of virtual reality hands using only their thoughts. Not only does the interface help survivors practice hand mobility, it also helps a physical therapist understand whether the patient is activating certain brain regions linked to faster recovery.

“We’ve created an environment where people who may be too physically impaired to move can practice mental imagery to help regain use of their arms and hands,” Alexander Doud, M.S., lead author of the study, said in a press release. Although he was associated with the University of Minnesota at the time of the study, he is now a CTO at a biomedical engineering and human factors design firm. Doud and his team reported their findingstoday at the American Heart Association’s Scientific Sessions 2013 in Dallas.

A stroke, the fourth leading cause of death in America, occurs when either a blood clot blocks an artery or a blood vessel breaks. When either of these things happen, blood flow to the brain is interrupted and brain cells begin to die, causing brain damage. Whatever functions were controlled by the affected region of the brain will also be compromised, including movement, speech, and memory. Surprisingly, though, impaired abilities can sometimes be fully recovered through therapy.

“During rehabilitation, usually a therapist will move the patient’s hand or arm in the desired direction while asking that patient to imagine they are making the movement,” Doud said in the press release. “In this practice space, the patients can control photorealistic hands by thinking about using their own hands without actually moving at all.”

To test their new computer system, which is based on a sensorimotor rhythm-brain-computer interface, the researchers enlisted the help of six stroke survivors who experienced impaired arm and hand movement. All of the patients had suffered hemiparetic strokes, causing paralysis on one side of the body only. While wearing 3-D glasses, the patients found themselves immersed within the illusion that they were seeing their own arms. Then, they began to practice using the virtual hands to reach out for a glass of tea or water. Meanwhile, the researchers gathered EEG data during the experimental trials.

“The system is created in a way that could allow it to be used to practice a wide variety of desired activities, such as picking up a toothbrush or opening a jar, with very little additional work to set up the system,” Doud said in the press release. “This can make it even more patient specific and that leads to patient motivation.”

Doud’s hopes were quickly realized. The enlisted patients were quickly able to control the system using only their thoughts, and in as little as three, two-hour experimental sessions they had improved their skills. Best of all, they achieved an accuracy rate in controlling the hands as high as 81 percent.

Although the study was much too small to support wide-reaching conclusions, the results still suggest this virtual reality system might one day serve as an affordable rehabilitation option. “This is an engaging system that encourages patients to practice using the areas of their brain that may have been damaged or weakened by their stroke, and the technology could be used along with commonly provided rehabilitation therapy for stroke,” Doud said in the press release.  Considering stroke is a significant contributor to adult disability in America, many would welcome this technology as an option during their recovery.