Each year a committee of Cleveland Clinic doctors asks hundreds of their colleagues to weigh in on which emerging healthcare technologies they think will help shape their practice over the next 12 months.

Each year a committee of Cleveland Clinic doctors asks hundreds of their colleagues to weigh in on which emerging healthcare technologies they think will help shape their practice over the next 12 months.

Then, the committee evaluates nominations based on clinical impact, probability of commercial success, progress in commercialization and significant human interest, and produces a top 10 list announced at the end of the Clinic’s annual Medical Innovations Summit.

The bionic eye given a humanitarian device exemption by the FDA this year topped the list of technologies that clinicians think will take off next year. “Sometimes, we’ve been a little early,” noted Dr. Michael Roizen during the announcement of the list. That might be the case this year, but nonetheless the bionic eye is an exciting step toward improving quality of life for people who have nearly lost their vision.

Here’s the list announced today. Note that the Clinic talks about these technologies generally, so any companies named below have been inferred by me, the writer.

10. B-Cell receptor pathway inhibitors for treatment of b-cell lymphomas and leukemias. The B-cell receptor pathway controls the growth of infection-fighting cells and becomes unregulated in the presence of cancer. Several drugs in the pipeline target this overactive pathway, led by Pharmacyclics’ ibrutinib. “The best cancer therapies extend life and reduce toxicity,” said Dr. Matt Kalaycio from the Department of Hematologic Oncology and Blood Disorders. “This one does both.”

9. TMAO assay as a biomarker for heart disease. Trimethylamine N-oxide is a microbial byproduct of intestinal bacteria that is produced during digestion of certain foods like egg yolks, red meat and dairy products. Several years ago, Dr. Stanley Hazen at the Clinic observed high levels of TMAO in people at risk of cardiovascular complications and has since published research furthering that hypothesis. His research was licensed to LipoScience, which is developing a diagnostic test for cardiovascular disease. “We can test for this and tell (patients) that they are at risk,” explained cardiologist Dr. Steve Nissen. “This is also a potential drug target.”

8. Computer-assisted personalized sedation system. Anesthesiologists are expensive, which is part of the reason why a device that could be operated by a non-anesthesia professional to deliver the drug propofol for sedation during routine procedures is so promising.  Ethicon Endo-Surgery’s SEDASYS device was granted pre-market approval in May of this year and is expected to be introduced on a limited basis beginning next year.

7. Relaxin for acute heart failure. Serelaxin is a synthetic version of the pregnancy-associated hormone relaxin-2, which allows blood vessels to expand in preparation for labor. Recent studies have shown that in people with heart failure, synthetic relaxin, which is also an anti-inflammatory, can increase blood flow throughout the body. Novartis is developing the drug for heart failure and received breakthrough designation from the FDA in June.

6. Fecal microbiota transplants. Antibiotics are supposed to kill bacteria, but that means they can also kill the good kinds of bacteria. An imbalance of good and bad bacteria in the gut can lead to a C. diff infection, which commonly occurs in hospitals and causes diarrhea. Dr. Steve Gordon, chair of the Department of Infectious Disease, said that some gastroenterologists are now using fecal microbiota transplants to restore bacterial balance in patients who don’t respond to drug treatments.

“It’s a very gross therapy but has been effective,” he said of the procedure, which involves transferring a liquid suspension made from a healthy person’s fecal matter into a sick person’s colon. Nissen added that there’s real commercial potential for a pill form of the treatment.

5. Perioperative decision support for anesthesia. One of the Clinic’s most recent spinouts, Talis Clinical, is commercializing an anesthesia management system developed there. It electronically documents events, drugs and procedures during surgery and provides clinical guidance for anesthesia best practices to be carried out. That includes alerting clinicians when a patient’s physiological metrics suggest that he is headed toward an undesired outcome.

4. A new era of hepatitis C treatments. Two new hepatitis C drugs approved in 2011, Incivek (Vertex Pharmaceuticals) and Victrelis (Merck), have changed treatment of the condition for people who didn’t respond to previous therapies. Now, another promising new drug called Sofosbuvir (Gilead), the first all-oral treatment for hepatitis C, is on the brink of FDA approval. And, there’s a handful of other drugs that attack similar targets that could be approved within the next year, said Dr. Robert O’Shea of the Digestive Disease Institute.

3. Responsive neurostimulation for intractable epilepsy. Seizures occur when clusters of nerve cells in the brain signal abnormally, briefly altering a person’s consciousness or movement. People whose seizures can’t be kept under control with medication are at risk for sudden unexpected death in epilepsy and a general degradation in quality of life. An implantable medical device made by NeuroPace Inc. was unanimously backed by an FDA panel this year for its reported ability to detect signs of seizures in the brain and respond by delivering a small electrical pulse to interrupt them.

Dr. Jorge Gonzalez-Martinez of the Neurological Institute said the device is about the size of a small cellphone and is implanted in the brain. However, it’s for patients who don’t respond to drug therapy so isn’t suitable as a replacement for long-term drug therapy.

2. Genomic-guided diagnostics for solid tumors. The advancement of genome-based tests that predict the biology and aggressiveness of a tumor have the potential to make cancer treatment decisions easier and more reliable, said Dr. Eric Klein of the Glickman Urological & Kidney Institute. A few of these are already on the market for breast, colon and prostate cancers. “Genomics allows us to make better clinical decision,” Klein said, and may also help expedite the development of new treatments.

1. Retinal prosthesis system. In February, the FDA approved humanitarian use of a bionic eye that in clinical studies enabled some patients with severe retinal pigmentosa to see shapes and movements.

RP is a group of diseases that damage light-sensitive cells in the eye and cause severe decline in vision, usually leading to legal blindness by age 40. Second Sight Medical developed a retinal implant made of electrodes and an antennae that’s placed at the back of a patient’s eye. It receives signals from an externally worn video processing unit, which translates images captured by a small camera mounted on glasses into signals that the brain can read.

Dr. Peter Kaiser of the Cole Eye Institute said that a retinal prosthetic is a game-changing technology but currently has some limitations — it’s extremely expensive and there are only a handful of surgeons who can do the procedure. Efficacy of the device has also not yet been demonstrated; it was cleared by the FDA for humanitarian use based on early data. 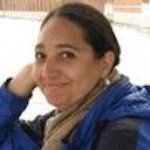