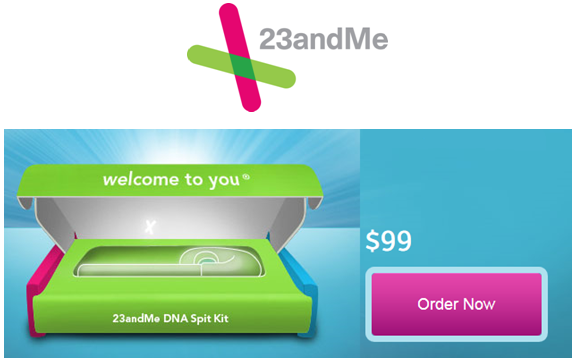 About 9 months ago – the DNA Spit Kit from 23andMe was $299. From their website today – it’s $99. But who owns the resulting genetic data and the rights associated with that data? That’s the issue now headed for the Supreme Court.

About 9 months ago – the DNA Spit Kit from 23andMe was $299. From their website today – it’s $99. But who owns the resulting genetic data and the rights associated with that data? That’s the issue now headed for the Supreme Court.

One of the primary goals of The Human Genome project (completed in 2003) was to identify the 20-25,000 genes in human DNA. The good news, of course, is that they succeeded and today about 84% of those genes remain free of legal encumbrance. The bad news is that about 16% of those genes are now protected by one or more patents – and we’re losing more and more of our genes to the patent process each year. According to an article last week in The New Yorker (here) there are now…

“… more than 4,000 genes that are covered by at least one U.S. patent. These include genes for Alzheimer’s disease, colon cancer, asthma, and two in particular—BRCA1 and BRCA2—that are highly associated with breast cancer [the most deadly cancer for women in the Western world]”

In the case of BRCA1 and BRCA2, the patents are held by Myriad Genetics. Any research, testing or experimentation on either of those two genes by any other company is in violation of Myriad’s patents.

This debate, of course, isn’t new. After years of legal wrangling, appeals and reversals, the Supreme Court is now scheduled to deliberate the case of the Association for Molecular Pathology, et al. v. Myriad Genetics, et al. The fundamental question remains – can we patent a product of nature – our genes?

On the one hand are the rights of an entire industry – The Biotechnology Industry Organization – to fund (and then profit) from expensive (and potentially life-saving) genetic research – in much the same way that our pharmaceutical industry funds (and profits) from (life saving) pharmacological research. Not surprisingly, many of the companies that hold gene patents are pharmaceutical companies. Last year alone – drugs worth about $35 billion in annual sales lost their patent status. 2015 looks to be similar for drugs totaling about $33 billion in annual sales.

Those are big losses and high stakes.  Just last month the Supreme Court heard arguments on the emerging (and lucrative) pharma business practice called pay-for-delay. The practice involves pharmaceutical manufacturers paying generic manufacturers to delay the release of a generic drug in anticipation of the patent cliff.

Gene patents are potentially even more lucrative and the challenge here is the patent protection that prevents other companies from advancing genetic research without paying a royalty or licensing fee. Owning the gene patent is, for all intents and purposes, owning a monopoly on the gene itself. The practical effect on the industry has been – again in the words of Michael Specter who wrote the article for The New Yorker – “chilling.”

One clear example is Myriad’s ownership of the BRCA1 and BRCA2 genes. Any second-opinion test on those two genes is effectively a double payment of $3,000 to Myriad – to rerun the exact same blood test. Technically it’s a “second opinion” – but it’s effectively a carbon copy (through Myriad) of the first test.

This battle over our personal health data certainly isn’t new. Almost 4 years ago – Dave deBronkart (e-Patient Dave and Forbes colleague) was the keynote speaker at the Medicine 2.0 conference in Toronto. The title of his keynote was the intentionally provocative demand: Gimme My Damn Data! What he was referencing back in 2009 was the electronic data stored by his healthcare providers in their electronic medical record (EMR) system (to which he had no access). He has since taken that message – and its broader applicability to patient engagement around the world – including this TEDxMaastricht talk here.

I’ve also written (here) about the challenges that Hugo Campos is having in accessing the data generated by his own heartbeat as its being recorded by the implantable cardiac defibrillator (ICD) inside his chest. The medical device manufacturer of the ICD considers that data proprietary to the company. Hugo’s TEDxCambridge talk is here.

In the larger context of healthcare reform (and debate), this data war intersects directly with 4 big trends circulating broadly across the entire U.S. healthcare ecosystem:

1)   Healthcare costs (where the U.S. easily surpasses all other industrialized countries – by a wide margin)
2)   Trust and Patient Engagement (how to get patients more engaged with their health)
3)   Quantified Self (tracking all of our data – in order to manage our health more effectively)
4)   Personalized Medicine (therapies customized to our individual genetic composition)

The data associated with these trends includes our EHR data, our ICD data – and now finally our genetic data. The issue of personal healthcare responsibility starts with personal healthcare rights – none of which is more fundamental than every piece of our own health data.

Two quotes from The New Yorker article that summarize the significance of the Supreme Court deliberation ahead were these.

“Just as we enter the era of personalized medicine, we are ironically living in the most restrictive age of genomics. You have to ask, how is it possible that my doctor cannot look at my DNA without being concerned about patent infringement?”

“If these patents are enforced, our genomic liberty is lost.”

Christopher E. Mason, of Weill Cornell Medical College and Jeffrey Rosenfeld, an assistant professor of medicine at the University of Medicine & Dentistry of New Jersey

The data itself may be in different formats – with different uses and purposes – but once again – the very future of our own personal healthcare returns to the Supreme Court. The issue may well be the lowly bits and bytes of ones and zeros – but the stakes couldn’t be higher.

Like editors trying to improve a poorly-written book, a team of scientists deleted some