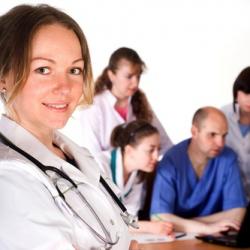 Does the Doctor Need a Boss? Einer Elhauge is a Harvard law professor and former adviser to the Obama campaign. He recently authored a paper that was published by the Social Science Research Network (SSRN) entitled, ”ObamaCare and the Theory of the Firm.”

Einer Elhauge is a Harvard law professor and former adviser to the Obama campaign. He recently authored a paper that was published by the Social Science Research Network (SSRN) entitled, ”ObamaCare and the Theory of the Firm.”

Is it just me, or do you also get bone weary of academics who have never actually been in business or the professions trying to re-order the world to their liking? After all the chaos these people have created over the decades, wouldn’t you think a little humility would be in order?

In this case, Mr. Elhauge thinks that fragmentation is the biggest problem in health care, and things would be much better if we had some well-managed firms directing the behavior of all the various elements, including doctors, hospitals, pharmacies, nurses, rehab centers, and so on.

Mr. Elhauge isn’t alone in this view. Some time ago I had a debate with my friends at Cato, Michael Cannon and Arnold Kling, over the same topic. They had written a paper that I reacted to pretty strongly. See the discussion here.

I have no problem with such entities coming into business and allowing people to choose them if that is what they want, but I draw the line at policy people deciding this is how things should be and imposing these ideas on the public.

To illustrate the current problems Mr. Elhauge relies heavily on the Institute of Medicine (IOM) report “To Err is Human” in describing how inadequate the current system is. He writes –

All this (fragmentation) would be less worrisome if medical errors within hospitals were not a serious problem, but they are. According to the Institute of Medicine, preventable medical errors in hospitals result annually in 44,000 to 98,000 deaths and cost between $17 and $29 billion. The Institute concludes that: “The decentralized and fragmented nature of the health care delivery system contributes to unsafe conditions for patients, and serves as an impediment to efforts to improve safety.”

Unfortunately, this IOM report has been pretty thoroughly debunked by, among others, Linda Gorman. See also here. The IOM estimates were based on exactly two studies in very localized areas that were then extrapolated to the entire population. The higher estimate was based on an examination in 1984 — 29 years ago — of 31,000 admissions in New York that found 173 patients who died “at least in part because of an adverse event,” according to a review in the Journal of the American Medical Association (Clement J. McDonald, Michael Weiner, Siu L. Hui, “Deaths Due to Medical Errors Are Exaggerated in Institute of Medicine Report.” JAMA 2000; 284:93-95.) Even the definition of an “error” was suspect, being based on the opinion of three physicians who reviewed the medi cal records. The lead researcher of these two studies, Trowen Brennan, MD, JD, cautioned against reading too much into his results, as reported by John Dunn, MD, JD in an analysis published by the Heartland Institute. The lower estimate of 44,000 deaths was based on a more recent (1992) review of hospital records in Utah and Colorado that was similarly extrapolated to the entire population.

One might think that these results would raise the question of in what ways was New York in 1984 so different from Utah and Colorado in 1992. But the IOM was not interested in actually learning anything from the research. It was much better to make a political argument condemning the entire American health system.

Elhauge should know this if he is going to cite the study to support the sweeping changes he later proposes. He goes on to also cite the shibboleth that the United States has worse medical results than other developed countries, but here he at least acknowledges that “those sort of statistics are subject to the objection that this difference may reflect our diet or lifestyle,” so he cites instead a study that American patients get only 55% of the “recommended levels of preventive care” and 56% of the recommended treatments for chronic illness. He says that is “remarkably low” but doesn’t compare it to anywhere else or question how reliable the recommendations might have been (such recommendations have varied wildly over the years).

So, we’re not off to a great start here. But he does concede that “not all integration (of services) is good,” and says “Well-functioning markets always feature some mixture of integration and disintegration.” Plus, “the optimal level of integration often changes over time with changing technologies or economics.” He uses the airline industry as a model, but points out that airlines “do not also provide our taxicab to the airport or our hotel when we arrive,” and that even now most airlines are “disintegrating” food service and luggage charges.

More importantly for the rest of the paper, it is not the FAA that requires the integration of airlines, that’s a business decision the companies make to meet the demands of the market.The idea that a Washington bureaucracy should determine how much and what kind of integration an industry should have is more than a little troubling, but that seems to be what he would like to have ObamaCare’s Independent Payment Advisory Board do, and do it through regulation alone — no more messy congressional squabbles.

Perhaps the strongest part of the paper is Section III, “How Current Law Mandates Fragmentation.” This appears to be Elhauge’s strong suit, and it shows how decades of state and federal laws have made it impossible for medical providers to work together, even if they wanted to. But if this is the problem it would seem the solution would be to roll back the mountains of prohibitions and enable market forces to restructure the system.

But even here, Elhauge neglects to mention things like Certificate of Need laws that prohibit new competitors from entering a market, and he completely overlooks the ways in which the Affordable Care Act worsens conditions, such as the prohibition on physician-owned hospitals. For some reason the idea of hospitals owning physicians seems like a good idea to Elhauge, but physicians owning hospitals is beyond the pale. Indeed, the whole exercise seems designed to allow bureaucrats and businessmen to have greater control over physicians, even to the point of telling them what they may and may not do for their patients.

Finally, though Elhauge has fun comparing our medical system to airlines, it is a pretty juvenile analogy. Medicine is nothing like airlines, never will be and never should be. Airlines serve a couple of hundred people at a time. All are going from the exact same place to the exact same place, at the exact same time. All get the exact same service — there is no variation, no customization. If a passenger would like to reach a destination other than what the airline serves, she has to make other accommodations, perhaps driving instead of flying.

A more analogous industry would be car repairs. Cars tend to break down more as they age. Some people take good care of their cars while others do not. When your car needs repair, you need it right away. There is a large array of car repair services, ranging from the Ford dealer to the mechanic on the corner. The secret to a good repair is a good diagnosis. Good mechanics get continuing education to keep up with changing technology. Car repairs are paid on a fee-for-service basis, but no one complains about the rate of inflation for car repairs, and no one is proposing that there be just one or two car repair companies in each locality. Fragmentation does not seem to be a problem in this industry. Why? Because we usually pay the mechanic directly and we will put up a fuss if he overcharges us.