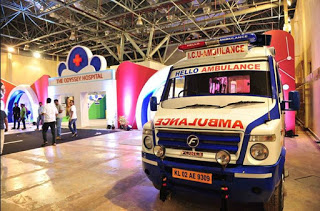 ‘Reverse innovation,’ a principle well established in the business world, describes the flow of ideas f

‘Reverse innovation,’ a principle well established in the business world, describes the flow of ideas from emerging to more developed economies. Reverse innovation refers to the process of first identifying and/or fostering a successful innovation in a LIC that addresses an unmet need in a HIC, then adapting and spreading the innovation from the LIC to the HIC. It is, in a nutshell, learning from and investing in poorer settings as one way to tackle problems in wealthier settings that require out-of-the-box solutions. The realization that the American health care system must simultaneously decrease per-capita cost and increase quality has created the opportunity for the United States to learn from low- and middle-income countries.

At GE Tech Mela, I came across GE’s Stripped-down, portable ECG machine- GE Healthcare’s MAC i is an ultra-portable, battery-operated electrocardiogram machine, designed for use in rural clinics in India, where mains electricity is either intermittent or non-existent. The cost is only 25,000 rupees (£320). It is a boon for the Indian market where electricity and primary healthcare access is a big problem.

The concept of Reverse Innovation and Glocalisation (Global- Local) is not new to GE. In 2010, I came across a dual-slice computed tomography imaging system called HiSpeed Dual with GE. It was the first CT system that the health care arm of U.S. conglomerate General Electric had made in India, and the first high-end CT imaging system that anyone had made in the country. GE Healthcare had previously imported the system for Indian customers. By manufacturing it in Bangalore, GE Healthcare cut the price by 10% and  reduced an 8- to 10-week waiting period as well.

Mr Shyam Rajan, CTO, GE Healthcare has contributed significantly over the last two decades towards the development of Maternal and Infant Care products such as infant warmers, incubators, and phototherapy equipment. He is a firm believer that “low cost” does not translate to “low technology”, and that the opposite can often be true. I was at the Healthcare Pavilion called “Odyssey Hospital” that showcased GE Heathcare’s key capabilities and solutions in an integrated manner. A mini hospital prototype enacting GE touch points at every level.

I thoroughly enjoyed my conversation with him as I have used most of the portable devices on the ground especially while I was involved with WHO’s PMNCH program on Mother and child health. We hit off a banter when I realised how value packed their offerings are keeping in mind insights they derived from the ground and real life challenges.

Munesh and myself talked at length about GE Superheroes, the concept of organizing Tech Mela every year, GE’s vision and how they celebrate everything they do.
It was a power-packed day and definitely a weekend well spent. You can catch up on more moments at #TechMela on Twitter handle @GE_ITC or take a look at this infograph that reiterates the vision- “Design and Make in India”.