The Flu Vaccine: Pros and Cons

Every fall we are inundated by advertisements for the flu vaccine.  It’s available for around $15 at pharmacies, clinics, doctor’s offices and schools.  There are a lot of questions concerning the flu vaccine however: Is it safe? Does it work? Who should avoid it?  What are the side effects?

Every fall we are inundated by advertisements for the flu vaccine.  It’s available for around $15 at pharmacies, clinics, doctor’s offices and schools.  There are a lot of questions concerning the flu vaccine however: Is it safe? Does it work? Who should avoid it?  What are the side effects?

According to the Center for Disease Control (CDC), not only are there several different strains of the influenza virus, but there are other viruses that present symptoms like the flu that are not the flu.  Therefore, if the vaccination strains — usually there are three different strains in a dose — don’t match up with the actual strains that infect that season, then the vaccine isn’t going to do any good.

When you get a flu shot you are being injected with these ‘inactive’ flu strains that bind to proteins in your blood stream to create antibodies, which attack the particular virus they are matched to defeat.  The flu vaccine is a game of prediction; they have to produce the vaccination before the flu starts to infect people, so they have to choose which 3 strains they think are most likely to hit the population in the upcoming flu season.  If they pick the wrong strains, you will have no protection against the strains that actually do show up.  This is why the flu vaccine isn’t always helpful.  According to their most recent data from the 2010-2011 flu season, results averaged about 60% effective prevention for those who received the vaccine.  This number reflects all age groups combined.

Certain data suggests that the effectiveness of the vaccine is much lower on the elderly since their immune systems are weaker and are not as capable of creating enough of the antibodies necessary to ward off the flu.  It can also be an issue of timing, the body needs about two weeks to create the antibodies, and then after a while they die off, so if you get vaccinated too soon or too late, you’ll still get the flu.

If you are allergic to eggs DO NOT get the vaccine, there are eggs used in the manufacturing process.  The majority of vaccines also contain the preservative thimerosal, which is about half mercury, so if you’re going to vaccinate your child you should definitely request a thimerosal-free shot.

There’s not a lot of definitive evidence to suggest that the flu vaccine is doing severe damage. Mild symptoms may occur, but when one thinks of the nearly 40,000 people who die every year from the flu, it’s hard to say which way to go is better.  The problem is that the people who tend to die from the flu are the ones that the vaccine doesn’t work as well for, like the elderly.  However, keeping the spread of the flu among healthy people down will help prevent the infections spreading altogether.

Evidence suggests that the flu vaccine is not dangerous per se, just reactive in some individuals. 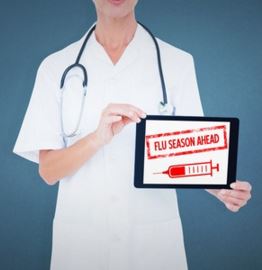 Nurses who fight the flu shot

The flu shot reminders started in August this year at my hospital. “Flu shot