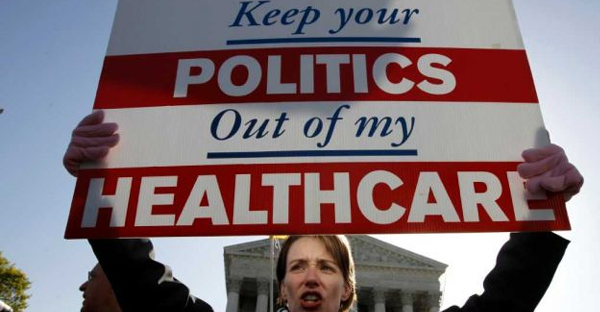 In an under-reported brief published last week, the Government Accountability Office confirmed that states which prevent accurate underwriting of

In an under-reported brief published last week, the Government Accountability Office confirmed that states which prevent accurate underwriting of health-insurance premiums by age impose higher premiums on young people. There has been no shortage of actuarial analysis of ObamaCare’s coming “rate shock” for young adults, but the GAO has used data from the U.S. Department of Health & Human Services’ own website. This is the department which tells us ceaselessly how beneficial ObamaCare is for young people.

The difference is not driven solely by forbidding insurers from charging actuarially accurate premiums to young people. The $349 policy in Nebraska has a deductible of $5,000 and that plan’s maximum out-of-pocket cap is $10,000. So while a policy-holder might have an unlucky accident that puts a serious dent in his bank account, he’s not going to go bankrupt with no hope of recovery.

An average 30-year old is unlikely to pay the extra $2,215 monthly ($26,580 per year) to get the extra “protection” of the Massachusetts policy, given the choice. And yet this is the direction in which ObamaCare drives us. New York forces insurers to charge the same premium to all adults. Slightly more “liberal,” Massachusetts and New Jersey allow insurers to blend age with other factors such that the most expensive premiums can be double the lowest (2:1 rating).

ObamaCare imposes 3:1 age rating rules nationwide. But actuarial consensus is that the average 62-year old incurs five times the medical costs of the average 22-year old. It is not possible to insure against aging. If we live forty years past our 22nd birthday, the likelihood of our turning 62 is one hundred percent. So, forcing insurers to charge the same premium to people of different ages does not reduce any individual policyholder’s risk ― which is the purpose of insurance.

In no way is this “just” or “fair.” It artificially makes health insurance too expensive for young people to afford without subsidy. When coupled with an individual mandate to purchase insurance, this necessarily imposes a burden of excess taxation on society, because high taxes are necessary to fund the subsidies.

This might explain why politicians impose it upon society: It increases their power to tax and transfer income.