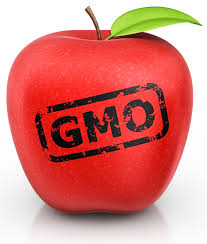 What are some examples? What methods are on the horizon?

What are genetically modified crops/organisms (GMOs)?

What are some examples? What methods are on the horizon?

What are genetically modified crops/organisms (GMOs)?

Genetically modified crops are crops which contain genes from another organism, which may be another plant, an animal, or a microbe. The World Health Organization defines them as “genetically modified organisms in which the genetic material has been altered in a way that does not occur naturally. It allows selected individual genes to be transferred from one organism to another, also between non-related species.” The goal is to add some desirable trait such which will, for example, increase resistance to pesticides or add nutritional value. The process is sometimes referred to as: genetic modification, genetic engineering, recombinant DNA technology, transgenic, or bioengineering.

The first GMOs were approved by the FDA 20 years ago in 1993. This initial testing involved a product called Flavr Savr Tomato. The goal was to prevent the cell walls from breaking down as the tomatoes ripened to allow the tomatoes to remain firm through the shipping and storage processes. While this was good in theory, production stopped in 1997 due to the specialized transportation equipment which was required.

BT corn was next on the horizon. BT corn was created to produce an insecticide which controlled pests such as the European corn borer, the fall armyworm, and the corn earworm. This genetically modified crop also provided a cost savings and better results. The FDA and the USDA approved BT corn in 1995 and is still being produced today.

Of course, not all testing is successful. The StarLink Corn incident is an example of what didn’t work well. Non-success stories provide lessons and education of what not to do in the future.  The goal was to create a variety of corn which could produce its own pesticidal protein. Unfortunately, issues arose in 2000 surrounding potential human allergens. A formal investigation revealed that the EPA had approved StarLink in 1998 to use as animal feed and other industrial, nonfood uses. Today, it is still used for livestock feed but the US registration for StarLink was voluntarily withdrawn and not currently available for human consumption.

What are the benefits of GMOs?

GMOs can increase nutritional value.  For example, Vitamin A (or other antioxidants), and iron can be added into rice plants. Vitamin A aids in immune functions, reduces deficiency-related diseases, and prevents vision issues such as blindness. Many of the third world countries use rice as a staple. The additional vitamins and nutrients may help stave off some of these Vitamin A deficiency issues. Other examples include: altering potatoes to add more essential amino acids, altering sugar beets to contain soluble fiber, and adding Vitamin E to certain vegetables to help reduce the effects of heart disease.

GMOs may produce greater yields. Greater yields enable more consumers to be fed from the same fields/processes. This can assist in alleviating some of the world’s hunger issues. Higher yields may provide increased profits to farmers while possibly reducing the costs to consumers

There are many other benefits to GMOs. Some of these include delayed ripening which can increase the shelf-life of certain vegetables such as tomatoes. Crops are able to withstand more extreme temperatures, become more drought resistant, and become more stress tolerant. Genetic engineering may assist in the production of life-saving drugs as well. As mentioned above, there may be a cost savings which can be passed along to the consumer. Less money is spent on pesticides, insecticides, and labor.

There are 2 main concerns:

The new gene may produce toxins. Toxins are poisons produced by the body, occurring in nature, or obtained from manmade substances. Changing the genetic composition of a plant may cause the body to produce these toxins, which in some instances can be fatal. The other more common effect is an allergic reaction.  For example, if a person is allergic to the Brazil nut, he will avoid foods that contain them. Let’s say a soybean has been genetically engineered to now include a protein from the Brazil nut. The consumer doesn’t realize the soybean now contains this protein. It is likely the consumer will have an allergic reaction to the soybeans.

There are other concerns which have developed. Unintended pollination may occur when genetically altered crops are planted in the vicinity of non-genetically altered crops. Additionally, native plants may inadvertently be altered again if in close proximity to these GMOs. Super pests may result as they build up a tolerance to the natural pesticides which can be created through GMOs. Creatures such as the monarch butterfly, which feed on specific crops, may not be able to survive if these crops are altered.  The ecosystem, as we know it, may shift dramatically as the balance of nature may be compromised. Consumers may build up tolerance to certain antibiotics diminishing their effect. Ethical and religious issues may occur as well especially with altering plant genes with animal genes. Vegetarians may take issue stating their traditional vegetables are now tainted with animal products. If genes of a pig are added to vegetables, will those who don’t eat pork become outraged?

What are some examples of genetically modified crops?

Are there any labeling requirements specific to genetically modified crops?

Unfortunately, the answer is no. While there are voluntary labeling efforts, there are no current required labeling protocols to specifically designate as genetically engineered. This enhances the propensity with those with known allergies to inadvertently ingest foods which they would have normally avoided.

On the horizon: what methods are being tested?

The latest technique is called marker-assisted selection or MAS. This product combines traditional genetics with molecular biology and allows for the selection of genes that control specific traits such as color, meat quality or disease resistance. The outlook is this method will be less controversial since it uses DNA not transgenic DNA to choose favorable traits.

With many advances in science and medicine, there are pros and cons and hurdles to leap. GMOs are considered a controversial issue. There are many aspects to consider including the nutritional effects on human beings, the environmental effects on the ecosystem, the methods used in production, and the current regulatory, identification, and labeling issues. The long-term effects are not yet known, but this is an exciting field which is producing many wonderful results.  Increased nutritional value, cures for diseases such as cancer, and helping to reduce the epidemic of world hunger certainly favor the continued production of genetically modified crops.