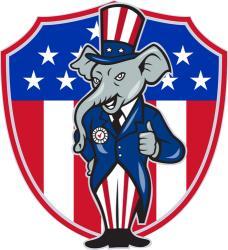 It is smart politics to start off a negotiation with an olive branch, because if you get everyone’s eyes focused on the carrot you’re dangling in front of them, they’re less likely to notice the stick you’re getting ready to hit them with.

It is smart politics to start off a negotiation with an olive branch, because if you get everyone’s eyes focused on the carrot you’re dangling in front of them, they’re less likely to notice the stick you’re getting ready to hit them with. In that spirit, the Burr-Hatch-Upton proposal to repeal and replace the Affordable Care Act (ACA) leads off with a set of “common-sense consumer protections.” Every good story has a hero, a villain, and an innocent victim. The narrative here is something like this: Consumers are the innocent victims of villainous insurance companies that have been emboldened by the poor policies of Obamacare, and it is up to us–the GOP lawmakers–to play the hero by stepping in with simple (i.e., common-sense) policies that will fix everything and protect the consumers. What are these common-sense fixes?

Prohibit insurance companies from imposing lifetime benefit limits on consumers
This is a great idea. However, I’d like to begin by pointing out that this is already in the ACA. Nice attempt to take credit for the opposition’s successful idea. Well-played.

Allow state insurance regulators to modify community rating in such a way that it approximates experience rating.
Here’s what this means: Under experience rating, the amount you pay for your health insurance is based on things like your prior health care utilization. Thus, if you’re sicker or more likely to use care, you’ll pay a lot more for insurance than someone who is healthy. Under community rating, these costs get averaged across everyone without regard for their particular health care needs. That means that everyone pays the same amount, which makes health insurance more expensive for healthier individuals, but much more affordable for those who are sick. What the ACA did was to implement a “modified” community rating. Under this system, health insurers are basically required to use a community rating approach, but are permitted to charge higher premiums to smokers, for example. They are also allowed to charge older adults up to 3 times as much as they charge younger adults (with the understanding that people tend to use more health care services as they age). As I mentioned, this means that the young and healthy end up paying more for their health insurance than they would under an experience rating system. The GOP proposal would like to move the modified community rating closer to experience rating by allowing insurance companies to charge older adults up to 5 times as much as they charge younger adults. They say that this “will have the effect of helping to immediately lower health care costs for millions of Americans.” What they don’t say is that it will also raise the costs for millions of other Americans by a minimum of 167%.

And, on top of that, they want to allow states to be the ultimate decisionmakers on these age rating ratios. So, in theory, a state could allow insurers to charge older adults rates that are 10, 15, or 20 times higher than what they charge younger adults. In effect, they could price older adults out of the market–and if the insurance isn’t deemed affordable, the ACA exempts those individuals from having to have coverage, meaning the end result could simply be a lot more uninsured Americans as insurers opt not to cover less healthy populations. Sure, the proposal would allow states to be more restrictive with their age rating ratios if they chose to, but if they did that, we’d basically see a further deepening of disparities in coverage between states as the optional Medicaid expansion has already demonstrated.

Require health plans to offer dependent coverage up to age 26.
This is another great idea. But, just like prohibiting lifetime benefit caps, this is already in the ACA. Yet again, the replacement plan is keeping the parts of the ACA that people like. Well, maybe. They do say that–in their effort to devolve decisionmaking authority–states would be allowed to opt out of this requirement. So, young people, if you like your parents’ insurance coverage, you need to know that the GOP doesn’t necessarily want you to be able to keep it. Maybe just make sure your parents move to a state that doesn’t opt out.

Require health plans to renew policies regardless of an individual’s health status.
At first blush, this might sound a lot like the ACA’s prohibition against insurance companies denying coverage to individuals with pre-existing conditions. Let me stress that that is not what this says. On the contrary, what this says is that if you have coverage, your insurer cannot refuse to renew policy each year just because you developed a health condition or incurred lots of health care costs. Health insurers could still cancel policies in cases of “fraud or misrepresentation on behalf of a consumer or failure to pay premiums.” It is not clear whether this means that they can rescind your coverage because you failed to mention that your maternal grandfather had high cholesterol. But, again, this is only speaking about people who currently have health insurance. The protection for people with pre-existing conditions–although it inherently includes this more limited requirement of coverage–is something else entirely, which I will address in my next post.

So, what’s the bottom line on these “common-sense consumer protections”? Well, essentially all 4 provisions are outright included in the ACA already, albeit with far more protection for the consumer. The GOP’s replacement plan simply softens requirements on insurers to provide guaranteed issues of insurance, makes it optional at the state level for insurance companies to cover dependents on their parents’ plans up to age 26, and allows insurers to charge older adults significantly higher premiums than younger adults. In the guise of freedom, the plan benefits insurers (the very group being held aloft as the villain at the outset of the narrative), and places the consumer (the innocent victim of the story) at greater risk. The carrot may look juicy, but you should pay attention, because the stick has the potential to leave quite a mark.