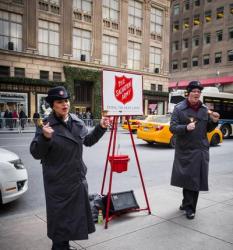 Holiday Charity Ideas: Giving Can Have a Positive Impact on Your Health My casual observation of the many Salvation Army bell ringers, dressed in Santa costumes and posed on street corners beside a red donation kettle suggests that this year these kindly men and women were told by someone higher up to ‘really perform out there.’ Passing through

My casual observation of the many Salvation Army bell ringers, dressed in Santa costumes and posed on street corners beside a red donation kettle suggests that this year these kindly men and women were told by someone higher up to ‘really perform out there.’ Passing through the streets, I see some who are dancing, others who are singing loudly, and, in many cases, tunelessly — anything to gain attention and contributions. Although these latest efforts appear comical at moments, I have an abiding respect for the Salvation Army, based wholly on my grandmother’s recommendation. A widow and single mother of three during the Great Depression, she once told me, “The Salvation Army never turned anyone away. They gave to anybody who asked.” Her sincerely humble opinion was founded on an unspoken belief that any true charity would give what was needed to those who needed it — without judgment or question. If giving is spiritual, shouldn’t it include compassion?

Ideals aside, even in those instances where it may not be as pure as the driven snow, charity improves the health of those who receive as well as those who give. Or so says an Economics professor from the University at Albany, SUNY, who investigated his hypothesis that tax subsidies for charitable giving have positive spillover effects on health. “Policymakers promote tax reliefs for charitable donors who itemize their donations in their federal and state tax returns,” wrote Barış K. Yörük in a paper published earlier this year. “It has been well-documented in the literature that such policies are quite effective in increasing charitable contributions. However, the existing literature often ignores the indirect effects of tax subsidies on giving related outcomes.”

To verify whether health is positively impacted by giving, Yörük used data from the Center on Philanthropy Panel Study (COPPS), which is the charitable giving module from the Panel Study of Income Dynamics (PSID). This longitudinal household survey — longest running in the world — is funded by the National Science Foundation and contains information on charitable contributions and several health outcomes. After pulling numbers, applying formulas, and running calculations, Yörük comes to some definite conclusions.

In light of this, many will be guided by the principle that “charity begins at home,” a thought that is especially resonant here and now. It is painful and shocking to consider that 14.5 percent (or 17.6 million households) were food insecure last year, meaning that many people had difficulty at some time during the year providing enough food for all their members. Essentially unchanged since 2008, the year of the economic crash, the persistence of this hunger problem in America indicates the true state of the economy and speaks to the failure of economic policies which have done nothing to stimulate creation of private sector jobs. And nothing is more galling than corporations that brag about how many people they employ overseas when they make billions from U.S. government contracts and so should employ people here — Raytheon, for instance.

Hunger, then, is certainly one area in which someone interested in giving might concentrate their contributions, but many worthy charities, both official and unofficial, exist and personal preference rules. That said, any individual who prefers giving to an organization would be wise to turn to CharityWatch, which rates and ranks approximately 600 charities based on its own system of analysis, which includes considerations such as generally spending 75 percent or more of its budget on programs, not holding excessive assets in reserve, and disclosing basic financial information and documents.

In conclusion, one of my personal favorites is Operation Santa. The premise is simple and sweet: Whenever the post office receives mail addressed to “the North Pole,” instead of returning these undeliverable letters to their crayon-wielding senders, the post master allows kind-hearted strangers to sort through the pile, select one, and send the child a gift. Each letter, it’s important to add, is redacted — much like documents obtained through the Freedom of Information Act — so that a child’s personal information is not revealed (The post office itself addresses each box.) Whose heart can remain untouched when reading the letter of a 6-year-old asking not for toys but clothes?