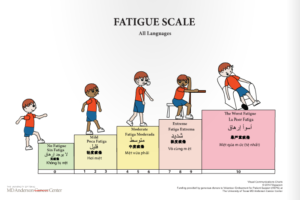 How to Communicate with Patients When Words Won’t Work

What if you were a patient with a serious illness, alone in a hospital and you couldn’t communicate verbally with the medical staff?

The feeling of loneliness and isolation on top of the emotional burden of being hospitalized with a serious illness would certainly be overwhelming.

There are any number of reasons why patients cannot verbally communicate with the staff, including:

What if you were a patient with a serious illness, alone in a hospital and you couldn’t communicate verbally with the medical staff?

The feeling of loneliness and isolation on top of the emotional burden of being hospitalized with a serious illness would certainly be overwhelming.

There are any number of reasons why patients cannot verbally communicate with the staff, including:

MD Anderson has created and developed Visual Communications Charts to be used with patients who cannot communicate verbally for whatever reason. These charts are comprehensive yet extremely simple to use and understand. Charts currently available are: The Visual Communications Charts were first used in MD Anderson’s International Assessment Center by the nurses assessing non-English speaking patients. When I asked Maria Maltez and Esther Garcia from the Language Assistance Department at MD Anderson how the nurses liked the charts, they answered that the nurses find the charts a great help and use them all the time.

Maltez and Garcia went on to comment about use of the Visual Communications Charts in other areas of the MD Anderson Cancer Center,

“We did a pilot with the charts earlier this year. We interviewed 20 patients total (English and Spanish speaking). We wanted to have some feedback from patients to see if this was a helpful tool and to see if we needed to make any changes before we finalized the charts. Overall, the results were very positive. We went to the impatient floors and some of the clinics. We interviewed patients that had had head and neck surgery. These patients told us that they found the charts very helpful in communicating basic ideas without having to write anything down. They expressed how difficult it was to be in pain, fatigued and scared without being able to communicate. They agreed that a visual aid like the one we presented would help alleviate some of those feelings.”

Another testimonial from Maltez and Garcia talks about a patient named Gloria (not her real name),

“Gloria had a tracheostomy. She first developed a severe inflammation in her throat and for months she could not utter a single word. She had to write everything down and was very tired, with a severe loss of energy. She was very depressed.

I provided her with the Visual Communications Charts and she was able to communicate most of her daily needs through them and also answer staff and doctors’ questions about her pain, energy level and other issues. When she could finally speak, she told me that being able to communicate simple ideas through the charts greatly helped her get out of her depression”

To be given a ways of communication when you had none must be an overwhelmingly positive feeling. No one likes to feel alone and isolated. These visual charts are simple and easy to use and offer so much hope and support to patients. This helpful tool should definitely be made available to all patients who have difficulty in verbal communication, for whatever reason.