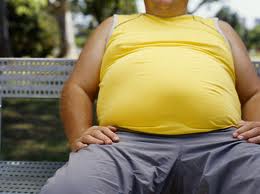 How To Get Rid Of Belly Fat: The Roles Diet, Stress, And Exercise Play In Belly Fat Reduction (Part 2)

Brian Rigby is a clinical nutrition writer whose articles are posted on the PeerTrainer. He is well-known to our readers from his previous post on chronic inflammation and ways to combat it. If you haven’t read it, I highly recommend that you do.  This is Part 2 of a series Brian has written about Belly Fat.

Belly fat is not our friend

When we consume processed food, the sugar content is usually significantly higher than what is found in nature, and is released much faster (as a result of low to no-fiber content). The average can of soda contains more sugar than two apples, and the sugar it contains is completely absorbed by our small intestine within 5 minutes.

A small cake or cookie can be completely broken down and absorbed in twenty minutes once it enters the small intestine. Even if the food is low-fat, the end result is still a rise in free fatty acids in the blood, as the sugars get metabolized into fat to be stored!

Why You Must Avoid Processed Foods To Burn Belly Fat

To make matters worse, many processed foods tend to be high in both fat and sugar, a nightmare for insulin resistance. Now, free fatty acids are being elevated from two ends of the spectrum, and there is a good chance that much of the excess energy (especially from the fat) will be stored instead of burned, leading to obesity as well.  This extra weight will then play its own role in the formation of insulin resistance, creating a dangerous cycle.

Stress is another factor which can induce the body to store more fat as belly fat, and does so through two primary mechanisms.
The first is by playing a factor in insulin resistance. Cortisol, the stress hormone, causes a couple of things to happen when it is present. First, cortisol turns down glucose uptake by the muscles, allowing the brain to horde the sugar. Second, cortisol increases the release of free fatty acids from our fat, giving the muscles an alternative fuel.

If you are stressed because you’re about to be eaten by a tiger, this provides your body with a quick source of energy to run away. Most stress doesn’t come in this form today, however, but rather in forms which do not require either a mobile response or an increase in fuel.
(PEERtrainer Tip: When you become aware of your emotions, it really is possible to “let them go.” Make a decision to become aware of them and then release them. If you do this, you win. It takes a little practice, but this works.)  When cortisol runs too high too often, glucose uptake is impaired and the blood can run too high in free fatty acids, which then impair the action of insulin. The end result can be decreased insulin sensitivity, and increased belly fat.

How Stress Leads To The Creation of Belly Fat

While stress may possibly play a role in increasing belly fat through insulin sensitivity, the more insidious way and common way which stress influences the production of belly fat is through selective deposition of free fatty acids. Cortisol actively selects for fat to be deposited as belly fat instead of subcutaneous fat!  We are not certain why cortisol has this effect, but a well-regarded theory is that it serves the body well, when stressed, to store its excess energy in a readily available form.

There Is Some Good News Here, Really!!

Belly fat is easier to release and burn than subcutaneous fat, so storing excess energy as belly fat favors a quick energy response to stress, allowing us to escape a future stressful situation better. But when the stress is constant, we just keep storing more and more fat in the belly, and since our response to stress is usually not running or climbing, we never give the body the opportunity to burn it back off!

The “Chicken And Egg” Problem With Belly Fat

It Is Easy To Burn Belly Fat- You Just Need The Right “Strategery!”

The ease with which belly fat releases free fatty acids is a double-edged sword–if you are trying to lose your belly fat, it makes it much easier, but if you are not working to reduce it then all that happens is your blood becomes naturally loaded with free fatty acids which are being continuously released and restored.  These fatty acids work in the same way they would were you to eat a high-fat meal, except now they don’t just rise after you eat, they are always high!  The problem with this is that while the body may be able to fend off occasional binges, when blood levels are constantly high, insulin is always being counteracted, and the body releases a constant stream of increased insulin.

How Belly Fat “Takes On A Life Of Its Own”

For many people, the ultimate cause of medically-notable insulin resistance is belly fat itself–a high-fat diet can start the ball rolling towards insulin resistance by increasing both the amount of fat stored and the amount which ends up as belly fat, but the real declines in sensitivity likely do not occur until the belly fat begins releasing its own fatty acids, creating conditions where insulin is always being fought.
A similar problem occurs with cortisol. Cortisone, a hormone considered the “inactive” form of cortisol, can be converted into cortisol by an enzyme found in higher amounts in belly fat.

Whereas most other tissue expresses two forms of the enzyme–one allowing cortisone to be converted to cortisol and vice-versa (thus helping to control levels)–the predominant enzyme in belly fat is the one which “activates” cortisone into cortisol.
What this means is that belly fat actively increases the amount of cortisol in your blood, possibly increasing how often you feel stressed and definitely contributing to a greater tendency to store belly fat and resist glucose!

Get Rid Of Belly Fat- And Get Rid Of Type 2 Diabetes?

So does insulin resistance, stress, or belly fat come first? There isn’t a clear answer to this yet, but the research does suggest that they are all interconnected. Nobody begins with belly fat, so diet and stress will certainly play a role in the formation of it.
Once belly fat is present, however, it will powerfully contribute to the formation of insulin resistance and cortisol, accelerating the body down the road to poor health. Of course the inverse is also true.

The risks of belly fat don’t end with insulin resistance and chronically high levels of cortisol, though the long-term consequences of these conditions are best avoided (type II diabetes and osteoporosis, to name two).  A much more potentially dangerous issue associated with belly fat is increased levels of chronic inflammation, which rises through at least two pathways.

First, the free fatty acids released by the belly fat trigger a protein called “Nuclear Factor kappa B” (NFkB), which is a key regulator in our immune response. When NFkB is triggered, it turns on genes to allow cells to proliferate and flourish and to prevent cell death. In particular, it affects two particular sorts of cells: monocytes and macrophages, which are both types of white blood cells and a part of our immune response.
What we traditionally think of as “belly fat” is actually a mixture of fat cells and the white blood cells just mentioned, and while the blood cells may seem innocuous compared with the fat, they are actually a quite dangerous presence all on their own. Once present in large amounts, the macrophages and monocytes begin to release pro-inflammatory cytokines, increasing the level of chronic inflammation throughout the entire body.

The second way belly fat increases inflammation is by creating pro-inflammatory cytokines through its own fat cells. When we have a healthy amount of belly fat, it releases proper amounts of these cytokines (which are a lot like hormones, but limited in function), but when our belly fat expands, so does the release of pro-inflammatory cytokines, contributing further to chronic inflammation.