This is one big building to say the least with 500 rooms.  The adult tower was named after the President of the United Arab emirates who also gave a big gift.  There’s only one patient per room and the technology is brought to the patient bedside.

This is one big building to say the least with 500 rooms.  The adult tower was named after the President of the United Arab emirates who also gave a big gift.  There’s only one patient per room and the technology is brought to the patient bedside. The video below has a a short tour of one of the new cardiology rooms.  He says technology lives here.  You can see all the screens and roll out beds for family members who want to stay over.  They even got everything down to the art with art that has maps to study and look at.  The building was 10 years in the planning and building.

In 2006, they entered into an agreement to have a 10-year affiliation with the General Health Authority for Health Services in the United Arab Emirates, giving Johns Hopkins the opportunity to manage the more than 400-bed Tawam Hospital in Abu Dhabi so big healthcare facilities have gone global as well.  BD  The second video goes over the pediatric units and this is interesting with the patient being in the “middle” of the room, not up against the wall with pediatric intensive care.  The technology in each room is staggering, but it’s good thing for sure. 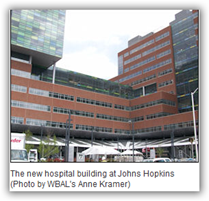 The new $1 billion building along Orleans Street will feature more than 500 private rooms, dozens of operating rooms, 28 elevators and new emergency rooms for children and adults

The state of Maryland contributed $100 million to the construction of the building and 36 percent of the cost came from philanthropic contributors like Michael Bloomberg and The President of the UAE according to Hopkins officials.

The private rooms help with patient safety according to Dr. Ed Kasper, clinical director of Cardiology at Johns Hopkins Hospital. “Because of patient safety issues, particularly infection control you want one patient in one room. The old days of wards are over. And even the days of two beds will shortly be over,” says Kasper. http://wbal.com/article/88700/2/template-story/See-Video-Hopkins-Dedicates-1B-Hospital-Building