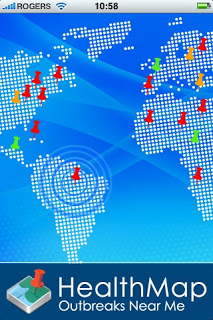 Maps do more than characterize our physical world, they also help us visualize information contained within it.  Thematic mapping has been applied to many types of information, including health data.  One of the earliest and best known examples of health data mapping was done by Dr. John Snow in 1854. Snow was able to identify the source of a deadly cholera outbreak by marking the location of victims on a London street map. (1)

Health maps enter the 2.0 era
Maps today aremore than static depictions of information. The integration of cartography with information technology has resulted in the creation of maps which are dynamic and interactive, allowing users to manipulate, analyze and manage geographically referenced data.  These advanced mapping systems are known as geographic information systems(GIS).
In healthcare GIS-based maps are being used to better understand a variety of issues including:
Visualizing problems, finding solutions
With over one million visits a year, HealthMap is one of the best known and most widely used health maps. Created in 2006, HealthMap is produced by a team of researchers, epidemiologists and software developers at Children’s Hospital Boston.  HealthMap collects information about disease outbreaks from various online sources including news aggregators, eyewitness reports, online discussions and public health reports. The goal is to produce a comprehensive, realtime map that allows early detection of global public health threats.  According to its website, HealthMap identified and tracked H1N1 cases well in advance of traditional reporting methods in the spring of 2009.  Currently HealthMap is tracking an average of 1000 events per day.
In May 2011, the Economic Research Service (ERS), a branch of the US Department ofAgriculture (USDA), introduced the FoodDesert Locator.  This interactive tool is designed to help policy makers and other public health professionals identify the location of food deserts so that they can effectively focus their efforts on expanding access to healthy foods. The ERS also produces the Food Environment Atlas, a mapping tool introduced in 2010, which provides geographic depictions of data on food choices, indicators of health and well being and community characteristics.
The newly created Mobile Health Map depicts the 2000+ mobile health clinics operating across the US.  The goal of the project is to build support for such services by demonstrating their cost-effectiveness in providing health services.  This map is being used as a data collection tool.  Mobile clinics are encouraged to enter information about their services and costs.
More recently, social media has been incorporated into health mapping. In October, 2011, Marcel Salathe, an assistant professor of biology at Penn State University, found evidence that sentiments about H1N1 vaccination among Twitter users were positively correlated with vaccination rates by geographic area. Salathe concluded that negative sentiments may lead to geographic clusters of unprotected individuals, increasing the likelihood of disease outbreaks. This information could potentially be used by public health officials to intensify educational campaigns in at risk geographic areas.
Finally, health maps aren’t just for public health professionals.  A new mapping service called Walk Score helps apartment hunters identify walkable neighborhoods as a means to promote better health.
There’s an app for that
Using GIS enabled mapping doesn’t require a major investment in informationtechnology. Vertices has developed a proprietary application called Mappler.com which allows community organizations to create interactive maps without specialized knowledge of GIS. Examples of health related maps can be foundon their website.
What health data would you like to see mapped?
(1) Aschengrau, Ann and George R Seage III. Essentials of Epidemiology in Public Health. Sudbury: Jones and Bartlett, 2008.

How To Succeed At Healthcare Marketing On

by Response Mine Health

As marketing evolves across all industries, companies are turning to digital approaches to