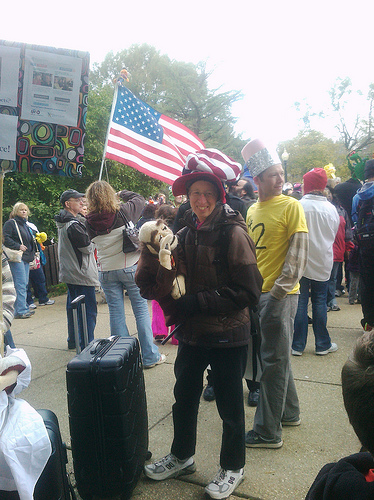 A March of Happiness:Million Puppet March

by Regina Holliday 7 min read
I have attended quite a few marches in DC.  There are often yelling, chanting people delivering soapbox speeches.  People press one upon the other, trying to stay upon the sidewalk and not spill out into the street.  There are occasional arrests and very few children.
The Million Puppet March was a very different kind of March.  People were joyous to be marching, even on blustery fall day.  Children swarmed to and fro within the milling crowd.  We met in Lincoln Park at 10 am.  Our puppet troupe consisted of a lovely neighbor named Renee Dunham (who responded to my posting about the March in The Chevy Chase List Serve), Megan Mitchell a local high school student and member of The Walking Gallery, We arrived with two suitcases filled with puppets and several other attendees joined our troupe on the spot.

Ted Eytan came with his camera to document the amazing visual opportunity and capture the joy and color of the event.  We marched all the way from Lincoln Park to the capitol lawn.  At most Marches people are content to swarm upon the sidewalk.  This march took to the street with marching drums and puppets over 10 feet tall.  Every once in a while folks would burst into song or chant a few times, but for the most part people talked about memories of Sesame Street and the importance of Public Broadcasting. Several reporters were interviewing the crowd in a very unbiased way, but one gentleman interviewing me seemed angered by the event.  I explained the wonderful health education that PBS has provided.  I showed him information about the Honoring Choices documentary series in Minnesota.  PBS teamed with the local hospitals and due in part to that work, Gunderson Lutheran Hospital has one of highest rates of completed advance directives in the nation.   The reporter walked away.

When we arrived on the capitol lawn, songs were sung and our organizers said a few remarks.  Then children were invited to the front speak about puppets and public broadcasting.  At the end of the event Ted and I practiced our Tedx speech that we will deliver in Detroit on Thursday. As we practiced, organizer Michael Bellavia walked by with his puppet asking if I was Regina.  I jumped up and hugged him saying thank you for all he had done.  I enquired about fundraising and learned that they still needed more funds to cover the permitting costs.  So I am posting the link once again incase any of you would like to support these brave folks who traveled across the nation in support of puppets and public broadcasting.