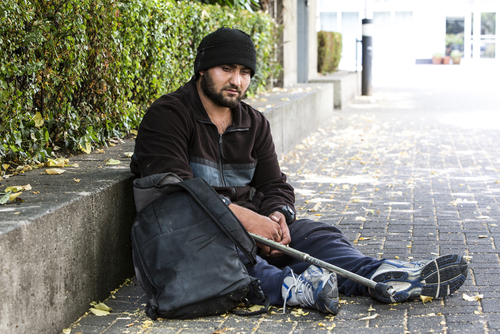 People who are homeless have poor access to primary care and often experience high levels of unmet health needs. As a result, it’s not surprising that the homeless make up a disproportionate share of emergency department patients.

People who are homeless have poor access to primary care and often experience high levels of unmet health needs. As a result, it’s not surprising that the homeless make up a disproportionate share of emergency department patients. But a new study suggests that mobile health has great potential to increase communication within that patient population, boost preventive care, and ultimately improve health outcomes and lower costs.

Researchers at the Yale School of Medicine’s Department of Emergency Medicine studied the prevalence and types of “new media” use among ED patients who experience homelessness.

Lori Ann Post — lead author of the study and an associate professor of emergency medicine and research director at the Yale School of Medicine — said, “It’s really important to us because we’re the emergency department, and we treat so many people experiencing homelessness,” adding, “I wanted to take the opportunity to identify how new media can transcend health care barriers, and I can’t think of a better population than people experiencing homelessness.”

Post said she wasn’t all that surprised by the high percentage of homeless patients who own cell phones based on her experience with such patients in the ED.

But what she did find surprising was that there was no significant difference in new media use or frequency between the two groups and that, in fact, patients experiencing homelessness were more likely to want health information on alcohol or substance misuse, mental health, domestic violence, pregnancy and smoking cessation.

Post said the findings demonstrate a real opportunity. She said, “We no longer see our mission in emergency medicine as just to fix a broken leg or fix your heart after a heart attack. … [W]e also see it as preventing people from unnecessary ED visits, and the way you do that is to treat their health conditions, too, and to follow up with them. And one of the ways we can follow up with them is through cell phones.”

Patricia Mechael, executive director of the mHealth Alliance, said, “The fact that we see similar rates of mobile phone ownership among homeless people as we do among those with stable living situations means there is a great opportunity to reach these people who might otherwise be unreachable or difficult to locate.”

While it’s not yet clear whether homeless patients would embrace mobile health tools, experts remain optimistic.

Mechael said, “It makes a great deal of sense to capitalize on the technology that these people already are accessing and use it to deliver health information and services that homeless individuals would otherwise be unable to access.”

There are a variety of mobile health programs that could improve access to care and care quality for homeless patients.

One example is smoking cessation interventions. Post said, “We know that poor people know that it’s not good to smoke and would like to quit smoking as much as wealthy people; they just don’t have the resources.”

Yale offers a quitting support line that patients can call up when they have a craving for a cigarette. But many patients experiencing homelessness said they couldn’t afford to use the support line because they have pay-as-you-go cell phone plans.

The study found that 33% of homeless patients had pay-as-you-go plans, compared with 19.78% of patients in stable housing.

Post said Yale is looking into whether it “can buy minutes for people so they can get good health care.” She said, “If we were willing to buy a few minutes so somebody can have an hour a week of talk on the quit line, then we would be preventing all kinds of diseases.”

Mobile health tools also can be used to follow up with patients after discharge. Post noted that patients often are distracted when being discharged, and it is sometimes difficult to focus on the information they are given by clinicians. As a result, patients often end up back in the ED for issues that are common side effects of their treatment.

Post explained that mobile health technology could be used to follow up with patients, remind them of their discharge instructions and answer any questions they may have. Doing so would not be very time intensive and would improve patients’ health management and prevent unnecessary ED visits.

Patients also could use mobile health tools to record and track their own health data, such as blood pressure. They then could electronically share that information with their physicians or upload it to a personal health record, Post said.

As with most technology interventions, there’s a cost associated with implementing mobile health programs, and homeless patients aren’t in a position to cover those costs. But it’s a no brainer for hospitals and other health care organizations to pick up the tab, Post said.

She said, “Emergency departments can no longer close their doors to poor people like they used to do. So since we must treat them, let’s do a good job and make their life better and their health outcomes better.” She added, “Think about it like this, if you’re willing to pay for helping people to quit smoking, that means we won’t have to pay for their heart attack or cancer treatment.”

In addition, there are already some no-cost cell phone services for low-income individuals. SafeLink Wireless offers a cell phone, about one hour’s worth of calling time per month and other wireless services to low-income individuals. To be eligible for the program, individuals have to demonstrate that they receive certain types of government benefits, such as Medicaid, or have household incomes at or below 135% of the federal poverty level.

Post said, “I think it’s a great program. I know there’s a lot of controversy and political divisiveness about poor people getting too much and nobody wanting to work or pay for their own things, but it saves so much money if you have access to health information.”

Even if cost is not a challenge, there are other barriers to implementing more widespread mobile health programs.

One potential barrier is getting physicians on board, especially because it involves a change in their workflow and services for which they may not get reimbursed.

Post said that the physicians she works with are “embracing it wholeheartedly.” Still, she notes that there are ways to limit the burden on physicians. For example, “physician extenders” — college students or other less costly professionals — can be used to monitor much of the programs.

“We don’t have to have doctors [who] cost hundreds of dollars an hour and fancy diagnostic tools to use these things,” Post said. “Doctors should be used for the important things — interventions themselves, recommending this to the patient, coming up with health care plans … — but it could be physician extenders [who] actually implement it [who] don’t cost as much to the health care system.”

Mechael said, “I think one of the largest barriers is, in some ways, the flip side of one area where we see the greatest potential. The fact that so many homeless patients do suffer from mental health problems and substance abuse may prevent these people from using mhealth interventions effectively when available.”

She added, “Without the kind of support system that someone in a more stable living situation may have, it may prove difficult to engage and retain homeless people in the types of mhealth programs that could benefit them most and make the biggest difference in terms of healthy behavior and regular medical care.”

Despite the challenges, Post remains optimistic about the potential of mobile health among the homeless population. She said, “I really feel like technology is the future. We’re going to save costs, improve health care and have better health outcomes.”