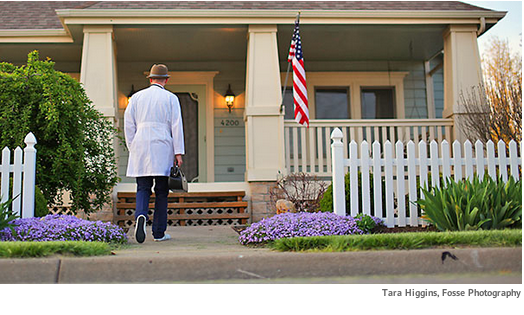 In old movies and TV shows, medical care always seems like a simple thing. When Beaver Cleaver or Jem Finch is sick or injured, the kindly neighborhood doctor shows up, fixes everything, and gives the parents a bill. Payment usually occurs off screen, but the medical expenses never seem especially onerous: the “Beaver’s Tonsils” episode of Leave it to Beaver doesn’t finish with Mr. Cleaver telling his son to hold on for a month until finances are better. And the broken arm scene in To Kill a Mockingbird doesn’t end with Atticus telling Jem to man up until they can make it to the free clinic. Instead, the process is simple: injury, treatment, payment, healing.

For a growing number of doctors who are trying to recapture the simplicity — and profitability — of old fashioned family medicine, the solution seems to lie in taking out one ingredient: insurance companies. These non-insurance practices, which generally go under the name “concierge doctors” or “direct primary care practices,” are usually aimed toward high-end patients, who can pay thousands of dollars per year to retain doctors who will see them at a moment’s notice. But while the concierge model is attractive, it is also out of the price range of most people.

In Lawrence, Kansas, Dr. Ryan Neuhofel, DO, MPH is approaching direct primary care from a different angle. While in medical school, he realized that the traditional model of medical care wasn’t for him. “I had an overly romantic vision of what a small-town doctor could be in today’s health care system,” he recalls. “I wanted to build a direct model that would work for most people.”

Dr. Ryan Neuhofel
Dr. Neuhofel’s patients pay a base fee that starts at $10 per month for someone under 30 and ranges up to $50 per month for a family. In return, they have 24/7 web and phone access to the doctor, as well as free administration and processing of many basic lab tests. Beyond that, patientspay for each service, from $10 for a cholesterol panel to $100 for certain kinds of casts. In-office visits cost $20 for 15 minutes; house calls — house calls! — cost $100.

Neuhofel’s prices are far below market rate. “I’m able to charge less than half the Medicare cost for most procedures,” he says. “While insurance policies vary, I think that most of my prices are about what a patient would usually pay for a copay.” And, because he doesn’t have to spend hours wrangling with insurers — or, worse yet, hiring a staff member to do so — Neuhofel can make a tidy profit, even with his lower prices.

On an immediate level, this translates into much closer contact with each of his patients. The average family practice doctor sees 2,000 to 3,000 patients per year. By comparison, Neuhofel is hoping to build a practice with about 1,000 patients. “That number will enable me to make about the same amount of money as the average general practitioner, while also allowing me to give them a much higher level of service,” he explains.

Cutting Back on Insurance

The trouble with the current system, Neuhofel argues, is not that patients havehealth insurance, but rather that they are entirely dependent upon it. “I tell people that insurance is best reserved for expensive, unexpected events,” he explains. For health maintenance and minor problems, he believes, most people should probably be paying out-of-pocket. “Health insurance should be like car insurance,” he says.”You don’t bill your car insurance for oil changes or little scratches in your car’s paint job.”

With that in mind, Neuhofel advises his patients to get catastrophic, high-deductible insurance to give them protection against severe health problems. “Personally, I have health insurance for catastrophic problems,” he says. “I hope that I never have to use it!”

Even so, Neuhofel estimates that 70 percent of his patients are uninsured; in fact, many are referrals from local emergency rooms, where the cost of care would be untenable. For these patients, he’s a serious bargain. “I’ve seen people in my area pay $2,000, $3,000 or even $4,000 for something that I could have handled for $50.”

Streamlining to Save Money

But for all of his old-fashioned customer service, Neuhofel also makes use of some very advanced technologies in his attempts to keep prices low. His office is almost entirely paperless, and he schedules most appointments through e-mail or via phone message.

And many of Neuhofel’s more basic consultations take place online: Patients send him questions, often accompanied by pictures, and he advises them on a course of action. In a traditional medical setting, a doctor couldn’t do phone consultations, largely because there would be no way for them to get payment for the time involved. Because of Neuhofel’s membership model, he doesn’t need to worry that the time he spends with patients won’t be reimbursed.

“Our only concern is making things easier for our patients,” Neuhofel explains. “They know that I’m paying attention, and the fact that I’m not rushed means that I am able to make a better diagnosis.” And in the end, that’s a profitable outcome for everyone … with the possible exception of insurance companies.