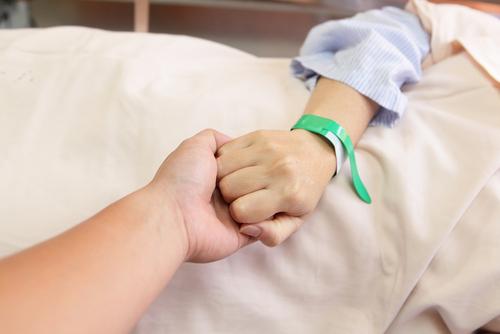 This is a true story.

My wife was about to celebrate her 10th anniversary as a Stage IV Non-Small Cell Lung Cancer survivor (a pretty remarkable feat) when it happened.

This is a true story.

My wife was about to celebrate her 10th anniversary as a Stage IV Non-Small Cell Lung Cancer survivor (a pretty remarkable feat) when it happened.

It started out as a cough.  We had just returned from a family trip and assumed she had picked up a “bug” from one of the boys. It also “lit up” on her semiannual PET/CT scan down at MD Anderson as small dark masses where there weren’t supposed to be any. We all hoped the cough and the PET/Ct results was the result of a cold or allergy….it had happened before. Her medical oncologist, one of the top thoracic oncologists in the world, doubted a recurrence after 10 years.  But if it was a recurrence, he told us he would put my wife back on Tarceva, the oral chemo that had worked so well for her before.

But we were all wrong. Her lung cancer was back and appeared to have spread.  The cough escalated into a 24/7 serious hack-a-thon.  She couldn’t finish a sentence without coughing.  We avoided being around other people as the coughing got worse. My wife didn’t want “bother” people.  Nor did we want our family and friends to get the wrong impression….that my wife was dying. She had beaten the odds once and she would do it again we told ourselves.  Turns out we were the only ones that believed it.

Within the space of 2 months, my wife saw a local pulmonologist (we live in Northern California not Houston, Texas where MD Anderson is) to rule out any other causes for the cough.  She also kept two long-scheduled appointments with an endocrinologist and a cardiologist for issues unrelated to the cough or cancer.

That’s When I Noticed It: Every Physician My Wife Saw Acted As If She Would Be Dead Soon To be sure none of my wife’s physicians ever said she was dying. But knowing something about the nuances of how physicians “communicate” with patients I could tell that’s what they were thinking. After attending every one of her doctor’s appointments over the last 10 years you recognize the tell tale signs. Neither the endocrinologist or cardiologist were familiar with my wife or her condition as these were our first visit to both.  But they clearly could not get past her coughing.  They politely cut short the initial appointment and told my wife to contact them after the lung cancer had been dealt with.  You have bigger problems than a thyroid nodule or a rapid heartbeat they told us.

Mind you my wife was concerned enough (let’s say she was engaged) about her thyroid nodule and heart health that she 1) made the appointment to be seen and 2) actually kept the appointment because she/we believed that she would be around long enough to have to deal with these problems sometime.

The pulmonologist, after ruling out allergies or infectious disease as the cause of my wife’s cough, threw up his hands in apparent defeat and said “your cancer’s back and there’s nothing more I can do for you. “ He referred us to a local a local thoracic surgeon in order to get her cancer re-biopsied before starting chemo.

The thoracic surgeon, like the other doctors, couldn’t deal with my wife’s coughing and shortness of breath which was pretty bad by now.  Rather than come up with a definitive plan of action regarding the biopsy, the surgeon hemmed and hawed about the different approaches to doing the lung biopsy – one more invasive than the other.  The surgeon gave me the distinct impression that the biopsy in the long run wouldn’t matter given the apparent seriousness of my wife’s condition.  He promised to discuss the biopsy options with my wife’s oncologist the next day and call us with the “game plan.”  The doctor never called us back.

By this time it was 5:00 pm on a Friday afternoon.  We felt we had already wasted too much time between the pulmonologist and the thoracic surgeon and my wife started her oral chemo at 5:01 pm.  We immediately felt better because at least we were finally doing something positive to address my wife’s problem.  Anything is preferable to watching sympathetic physicians, nurses, office staff, radiology techs, etc.  shake their heads saying to themselves “poor woman” doesn’t have long to live.

Within 10 days of starting her oral chemo, my wife’s cough and shortness of breath completely disappeared.  After 2 months of being on Tarceva the first follow up the first PET/CT scan revealed what the radiologists called a significant response to the treatment.

Not bad for someone whom so many clinicians had written off!

Physicians need to be aware of the fact that they both bring pre-existing attitudes and biases to the office visit…and check them at the door.  These attitudes and beliefs color the decisions clinicians make.  The extent to which clinicians inform patients of all their diagnosis and treatment options, engage patients in shared decision making, or decisions as to how aggressively treat the patient’s condition are all influenced by physician’s beliefs and attitudes.

Lung cancer that presents as a bad cough is like a red flag to a bull. It invokes a whole set of assumptions about 1) how the person got the disease (you must have been a smoker) and 2) the person’s odds of survival – slim to none.

You have to wonder how many people’s lives are cut short or whose care is not what it should be simply because their doctor jumped to the wrong conclusions.

That’s what I think. What’s your opinion?