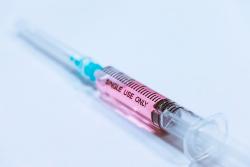 Within the $70 billion plus global market for injectable drugs, one specialty segment – the prefilled syringe – has garnered noteworthy popularity since the 1980s. Prefilled syringes were introduced during World War II, but it wasn’t until the early 1980s that this injectable drug delivery method started gaining larger exposure.

Within the $70 billion plus global market for injectable drugs, one specialty segment – the prefilled syringe – has garnered noteworthy popularity since the 1980s. Prefilled syringes were introduced during World War II, but it wasn’t until the early 1980s that this injectable drug delivery method started gaining larger exposure. The turning point came when Sanofi and Rhône Poulenc-Rorer launched heparins in the form of prefilled syringes.

Why It’s Hard to Ignore the Advantages of Prefilled Syringes

Drug administration via the traditional ampoule and vial method requires adhering to a number of steps such as: reading the required dose prescribed by the physician from a prescription, withdrawing slightly more formulation from the vial than prescribed, inverting the syringe to allow any air bubbles to ascend to the top, depressing the plunger slightly to expel any air, and finally, depressing the plunger slightly further to make the dosage in proportion prescribed by the physician.

These steps can be arduous, not to mention error-prone.

In contrast, drugs filled in prefilled syringes can be administered merely by removing packaging of the syringe and injecting the formulation. Their single-use, disposable format, combined with the fact that fixed doses of drugs are filled in them mechanically and again cross-checked electronically during quality check, makes their use easy and error-free. Prefilled syringes also reduce the risks of needle-stick injury, which is more likely with traditional formats because they keep the needle tip exposed longer.

Another cost-efficient feature of prefilled syringes is the precise amount of drug contained by them. Vials and ampoules have to be filled with more liquid than what is prescribed to be injected so that the correct amount is withdrawn. The excess formulation that gets wasted can be a costly matter, especially when expensive biotech products are considered.

Combined with the enormous benefits presented by prefilled syringes, it was the emergence of biotechnology drugs during the early 90s that led this market to robust expansion. The market has since continued to grow at a good pace. Analysts suggest that nearly 3 billion prefilled syringes were sold in 2013. Potential growth opportunities in the market suggest that this market could easily notch a demand for nearly 7 billion units by 2019.

A lot has been said and written about prefilled syringes over the past decade and a range of new developments have been brought to the market by leading manufacturers. But there is one truly important point that remains unaddressed, by both the consumers and the people administering these drugs: the rare existence of prefilled syringes in the critical care emergency drugs market.

The critical care emergency drugs market, not surprisingly, is the area where benefits provided by prefilled syringes could be best exploited to enhance patient care and ensure safety. Drugs used in critical care centers and at emergency situations are such that they can save a life, or may claim one, for instance atropine and ephedrine.

The fact remains that a major portion of drugs from this therapeutic class is still prepared and dosed in syringes by critical care nurses around the globe. Syringes filled with such critical care drugs are prepared every day to treat patients and some are filled only on account of an emergency anesthesia or planned surgery.

Surveys say that nearly 70% of syringes of atropine dosage prepared for emergency situations are ultimately wasted because of the lack of a necessity during the operating procedure, and lack of evidence of stability and sterility for later use. The demand for atropine (and other critical therapeutic drugs) is huge – millions of atropine glass ampoules are sold every year throughout the world. Wastage of at least 70% of them must be a substantial loss of funds to everybody involved in the chain of treatment. Let’s not forget that risks of glass cuts with these products for the medical staff are also huge.

In light of these substantial numbers, there is a pressing need for more prefilled technology in every therapeutic area. Quality-controlled, precisely-filled and large-scale industrially manufactured drugs in prefilled syringes would contribute significantly toward eradicating medical errors, risks of nosocomial infections, and reduce wastage of drugs and supplies at large.

Chiefly, they will allow medical staff to save valuable time and attend to patients more effectively – a factor that can make or break equations as important as someone’s life in operation theatres.