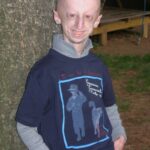 There was so much going on today, I am only going to be able to scratch the surface.  Whew!

So, we started the day with Frances Collins, Director of the National Institutes of Health playing guitar and singing, together with Jill Sobule, a ditty on stamping out disease. [Now, that was different.]

There was so much going on today, I am only going to be able to scratch the surface.  Whew!

So, we started the day with Frances Collins, Director of the National Institutes of Health playing guitar and singing, together with Jill Sobule, a ditty on stamping out disease. [Now, that was different.]

Then he got serious as he talked about the advances made in basic research of certain diseases.  He focused on Hutchinson-Gilford Progeria Syndrome, a rare disease that leads to rapid aging so that teenagers resemble 80 year olds.  To show us first hand the power of basic science research, Dr. Collins introduced us to Sam Berns, the fifteen year old son of two doctors, who has the Syndrome.  Although Sam is bald and has obvious aging of his skin and, by observing his gait, his joints, but he spoke to us like a well informed, charming, and insightful teen.  He told us that although participating in clinical research is trying, it gives him and other people with Progeria hope that treatment and maybe even cure might one day be possible.  It made the imperative of clinical research real and immediate.

After Sam left the stage, Dr. Collins went onto give an impassioned speech about the importance of research and researchers and ended with a plea for all of us to encourage young people to become research scientists.  A very good way to start to the TedMed day.

Another highlight was Howard Shapiro, a Santa Claus of a man who hopes to gift the world with nutritious food.  Working with a global community of organizations, the goal is to sequence 100 food crops, then train local plant scientists who can help transform the way families in the developing world farm so that they grow more nutritious foods and eliminate the scourge of stunted growth.  No  small goal.  Here is a Shapiro video:

Lisa Nilsson, a visual artist treated us to a brief look at her paper quill anatomical sections–marvelous works of art that are cross sections of the human body.   Ivan Oransky made us laugh as he talked about the overdiagnosis of predisease (e.g., pre-hypertension, prediabetes), explaining to us that everyone in the room has a predisease – called pre-death.  The risk factor for pre-death he explained, is being alive (laughter).  Interestingly, Ivan is a doctor who now identifies himself as a journalist.  He is the Executive Editor of Reuters and the Treasurer of the Association of Health Care Journalists’ Board of Directors – a doc with a second life.

Seth Cooper, the Creative Director of the Center for Game Science at the University of Washington talked about Foldit (Solve Puzzles for Science), the game he helped develop that engaged ordinary folks in configuration of proteins to optimize clinical activity.

David Icke, CEO of MC10 wowed us with visuals of his “flexible silicon technology” – these are “tattoos” that may one day be applied to our skin, internal organs, brains and who knows where else to provide continuous data and monitoring of our varous bodily functions.  Sound fantastical, yeah, but first products should be in the market later this year.

Jay Walker, Curator (and Emcee) of TedMed, is evidently a collector of much cool stuff.  He first shared photos and audios of the moon landing.  I don’t think I knew they were very close to running out of fuel before finding a safe landing spot.  I also didn’t know the astronauts heart rhythms were being recorded.  The highlight of this presentation was seeing Buzz Aldren’s tachycardic EKG recording before and after the landing (autographed, of course).  Jay also did a show and tell of the “printed” word – from handprinted on parchment to Guttenberg Bible to Kindles and beyond – fun, but I worried about these rare treasures being on stage in a non-controlled atmosphere.

One of the funnest (and funniest) talks was Diane Kelly, Senior Research Fellow at the University of Massachussetts, Amherst.  I had dinner with her the night before her talk.  She told me she was an evolutionary biologist and that her area of interest was penile erection.  Ok, Diane, I thought, that’s nice.  Her talk was literally out of the ballpark.  She explained, as if we didnt know, the importance of penises as a conduit of sperm to the egg.  She talked about the essential characteristics of penises (flexible, but firm enough to reach where they need to go).  Then she told us how she discovered that it isn’t just the ability of the penis to enlarge, but also, how important it is to have a structure that is firm, minimally bendable, and most important, doesn’t “wiggle.”  She discovered the perpendicular arrangement of collagen in the penile wall gives penises those characteristics.  For rest of the day, Diane was referred to, with all due respect, as the Penis Lady.

Robert Gupta was introduced as a violinist who debuted with the Israel Philharmonic at age 11…and also as a neuroscientist.  He started his talk with a violin concerto and then talked about the impact of music on brain.   He thought he had to choose between being a musician and a neuroscientist (he had dreams about being a Paul Farmer type of doctor).  He ended up combining both dreams by founding Street Symphony, an organization that brings music to underserved mentally ill living within homeless, incarcerated, and Veteran communities.  He is a 2011 Ted Senior Fellow.

Virginia Breen, mother of Elizabeth Bonker told us the story of Elizabeth’s autism.  A beautiful child, with sparkling eyes, Elizabeth quit talking at age 2.  The medical and educational community labeled Elizabeth intellectually limited.  Indeed, she has “failed” an IQ test.  But her Mom was persistent in her efforts to help Elizabeth learn, eventully bringing in a woman who taught Elizabeth how to type letters on a large key board.  Lo and behold, Elizabeth was “In There” – frustrated by her inability to speak, but intellectually vibrant (eventually IQ testing as a genius).  People, including her Mom, started listening to her – and it turns out Elizabeth had always been listening to everything going on around her.  Elizabeth is now a talented poet and author of an award winning book, I Am in Here: The Journey of a Child with Autism Who Cannot Speak but Finds Her Voice.

There was much more in this jam-packed Day 2 of TedMed, but I think  you  have gotten the flavor. TedMed is designed to make you think, experience, talk, think more, and then engage.  My week at TedMed is a great big present to myself and I am so glad I got it. My apologies to the other  marvelous presenters that I didn’t write about here – my only excuse is that it is midnight, I am “out of gas,” and, most important, I want to stay awake during Day 3 – it starts 8 and a half hours from now. G’nite.