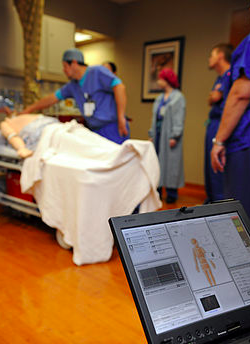 Simulation – A Disruptive and Transformational Technology In Medicine

EXCLUSIVE POST – Incredible innovative and entrepreneurial skills have led to many new techniques and technologies in medicine. Some are both disruptive of the old way of doing things. Others are transformational. Over the next few weeks I will review some of those that I believe are among the most disruptive and transformational. Medical simulation is such an advance. It is dramatically transforming the way medicine, especially medical procedures, are taught and it is clearly disrupting the long held approach of learning on the patient.

Medicine came late to simulation. Often this has been excused away with the comment that medicine is just too complicated. Airlines have used simulation for decades to teach, to train, to test and to certify competency. Indeed, a would be pilot is not allowed into the cockpit until he or she demonstrates competency in the simulator including dealing with various unexpected and uncommon emergencies. Flying home from Denver one evening, I sat next to a United captain returning from the simulation center. His normal route was Newark to Tokyo in charge of a 747. He explained that once in Tokyo he had to remain there for five days before he could do the return flight and then had a prolonged time off before his next flight to Japan. So he only got to take off and land a few times per month and he had to share those with his first officer. “Not enough to stay current and competent, so I just spent two full days in the simulator where they threw all sorts of unusual problems at me. It is so good that it really seems like you are in the real plane. I would be too rusty without this opportunity every so often.”

The military saw the value of simulation first for training medics. They are young individuals usually just out of high school with limited medical training but who need to be competent when faced with battlefield causalities. With simulation they could learn and practice inserting an airway, an IV, a chest tube or other procedures. And they could be tested after learning to be use that they were effective. Much of the investigative work was done by or under contract for the Army’s Telemedicine and Advanced Technology Research Center (TATRC) at Fort Detrick, Maryland. As a result of their initiative, simulation is becoming not only front line but standard in military centers and increasingly in civilian teaching hospitals.  But acceptance has come slowly. In part, it is due to “this is not the way we do things here.” In part it is because hospital executives see it as just another cost which is not reimbursed. And in large part it is because those in practice or in leadership positions did not realize the full potential nor the incredible value simulation brings to the table. Here is an example of the latter.

A few years ago I found myself on a committee to evaluate a new academic hospital under construction. After reviewing the architectural plans, the technology plans and other materials, I asked about the plans for simulation laboratories, noting that I had seen no space allocated by the architects. The CEO said that they had no current plans since the affiliated medical school had a facility that could be used, albeit some miles away. He did not seem to feel simulation was critical as a part of the new facility. My understanding of the value of simulation suggested that these should be readily accessible facilities immediately adjacent to the procedural areas such as the ORs, the cardiac catheterization laboratory and the GI endoscopy area. Proximity of the training area to the actual procedural area such as the OR is important so that trainees can easily access the equipment whenever they have time available. Being at some distance is equivalent to assuring that it will not be used. Adjacency also means that expert physicians can also gain new technologic prowess and even practice special procedures before the actual case. That evening, in January 2009, I mentioned to my wife that I needed to figure out a strong argument. She gave me the answer. At our meeting the next day I asked if anyone believed that Chesley Sullenberger, the captain of the plane that had landed in the Hudson River the day before, had ever previously landed a plane with both engines out. Two of the architects in the room got a look on their faces that they understood where I was going although at least two of the physicians did not. I then pointed out that the pilot had in fact practiced in a cockpit simulator multiple times with many different emergency scenarios, including the loss of all power. At 3000 feet with sudden power loss, he did not have time to pull out his manual; he needed to respond immediately based on practical, not book training. Simulation was how he knew what to do.

The past decade has witnessed the rise of simulation as an important adjunct to medical training.  The refinement of technologies related to simulation led to improvements in the realism of simulators and a series of validation studies contributed to a growing acceptance of their use.  Today, simulation is accepted by leading authorities as essential to training, as seen by the requirement of simulation in medical curricula, notably those determined by American College of Surgeons, American College of OB-Gyn, American College of Anesthiologists, Nursing Associations, AORN, and many others.  We can expect that various National Boards will require that simulation be integrated into training of procedural skills, and further that simulation be used during the examination process for certification.  The rise of procedural simulation as a necessary adjunct to medical training was spurred also by activists pushing to stop surgical training on animals and – with the rise of consumerism – by patients who will no longer tolerate being “practice models” if an alternative exists.  The old adage “see one, do one, teach one” has been replaced with “see one, do many”.  Clearly, the use of procedural simulation has had enormous impact upon the safety of medical care for patients.

Some specific advantages of simulation include that it can provide elements of training without the necessity of waiting for a clinical challenge to arrive via the ER or for a situation to develop in the hospital. Just decide to practice, say, a lumbar puncture, and it can be done right now. Since the procedure can be done multiple times until the trainee is comfortable the time required for competency development can be shortened substantially. This is especially important in this era of reduced hours for resident work. Simulation can provide both the benefits of repeatability of “same case” and also the advantage of variation with a “similar case.” Simulation can contain curriculum and measure performance against established metrics. What this last sentence means is that simulation is not just for learning but it is also for testing competency. So now instead of a resident reporting that he or she has done 8 lumbar punctures in the past year, he can report that he did 8 the last few evenings and has now demonstrated his competency. Now he can do his first one on a patient – under attending physician supervision still – and be comfortable that he will do it properly.

Medical simulation is now much improved but the technologies that drive it will need to have much greater refinement. One might say that simulation is still in the “technology age” and needs to advance to the “information age” and then to the “knowledge age” before it will reach its peak of value – ala simulation in the airline cockpit setting.

Those that manufacture simulation technologies are working on some of the following to make it better. One is the ability to have a sense of touch for the operator when doing a procedure on a simulator, called haptics. Another is the ability of the simulator to appreciate the tissue displaced by a movement. It is this ability that allows the trainee to “suspend disbelief” that this is a simulator and not a real setting. Another is called “tissue-tool interaction” or allowing the simulator to give a realistic graphic representation of an action by the operator, such as what happens from cutting or cauterizing tissue.

Simulation has made impressive gains in the past decade or two and is now becoming commonplace in the teaching of procedural skills. In some situations, such as the insertion of a stent into the carotid artery, the FDA mandated that an operator demonstrate competency on the affiliated simulator before proceeding with a live patient. We should expect to see more and more of this type of requirement in the future. For now it is fair to state that medical simulation is a transformational technology that is having a real and beneficial impact on medical education and training plus adding substantially to patient safety.

The practice of medicine evolves slowly but sometimes forces or new innovative technologies or new knowledge lead to disruptive change, indeed, transformational change. Such is the case with robotics, genomics and, quite probably, nanomedicine. Simulation is very disruptive – changing our centuries-old approach to teaching medicine by practicing first on a patient to now demonstrating competency first on the simulator.

Stephen C Schimpff, MD is an internist, professor of medicine and public policy, former CEO of the University of Maryland Medical Center and consults for the US Army, medical startups and Fortune 500 companies. He is the author of The Future of Medicine – Megatrends in Healthcare and “The Future of Health Care Delivery- Why It Must Change and How It Will affect You” from which this post was, in part, adapted. Updates are available at http://medicalmegatrends.blogspot.com