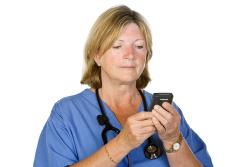 Why Are Hospitals Still Using Pagers? But there’s another side to the story: Health care has been slow to adopt certain technologies. Even with the recent government push for EMR, the field is 10 to 15 years behind other industries in establishing electronic record-keeping. It also lags in the move to cloud computing, according to technology firm CDW.

In some respects, health care is out of date on mobile communications, too. How else to explain why pagers are still so common?

Alive and Well in Health Care

Digital pagers saw their heyday in the 1980s and early 1990s. As cellphones became popular, pagers became obsolete for most business and personal applications. Not in health care, though. By some estimates, as many as 3.5 million pagers are still being used in U.S. hospitals.

The fact that pagers are still alive and well in health care is surprising considering the benefits of newer technologies such as text messaging. When a phone number shows up on a physician’s pager, there’s not necessarily a way to know who sent it or how urgent the matter is. A patient could need immediate attention, lab results could be available or a colleague could be ready for lunch. At times the process can result in extended games of phone tag, wasting clinicians’ time and possibly detracting from quality of care and patient satisfaction.

Texting, on the other hand, amounts to instantaneous communication among health care team members. The doctor can assess the importance of the message and how quickly it needs a reply. Sometimes a brief return text will resolve the issue.

Let’s be clear: Physicians are, for the most part, not Luddites. They almost all use smartphones, and they love to text as much as anyone.

The reluctance to change systems occurs at the institutional level. Health systems have avoided switching to modern communications technology for several reasons, each of which made sense at one point. Increasingly, however, the advantages of physician texting are becoming apparent for many health care administrators, and the transition away from pagers is underway at numerous large organizations.

Here are a few considerations that have kept pagers hanging on:

When health systems market themselves as having state-of-the-art technology, consumers have a right to expect the claim to be true. But if they or their family members experience delays in care because a doctor hasn’t returned a page, their faith may be shaken. That doesn’t mean that hospitals should change for the sake of change. It does, however, mean that when newer technology, such as secure text messaging, promises to make care delivery more efficient, administrators should give it a serious look.

6 Ways to Improve Patient Satisfaction Within

The patient’s satisfaction is vital for nurses because when they are sick, their families