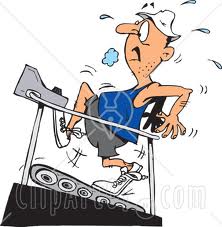 Why Do Guys Sweat So Much?

Go to any gym and you are bound to see guys running on the treadmill and sweating profusely from every pore in their body. And the women? Compared to men, they hardly break a sweat. This is one of the small mysteries of life that we just take for granted, filing it under “boys will be boys”, and move on to more important existential issues, like the Chinese Yuan exchange rate. But seriously, do men sweat more than women, and if so, why? The short answer is: they do. But the ‘why’ is truly intriguing.

How do we know that men sweat more?

In a paper in the October 2010 issue Experimental Physiology a group of researchers from the Laboratory of Human Performance Research at Osaka International University, studied the sweat response of men and women to exercise intensity.  Four groups of subjects (trained and untrained females, trained and untrained males) cycled continuously for an hour in a controlled climate with increasing intensity intervals. They  assessed the sex differences in the sweat gland response to changes in exercise intensity with respect to subjects’ physical training status. The results showed that men are more efficient at sweating. While exercise training improves sweating in both sexes, the degree of improvement is greater in men, with the difference becoming even more pronounced as the level of exercise intensity increases. The untrained females had the worst sweating response of all requiring a higher body temperature than the other groups (or work intensity) to begin sweating. In other words, women need to get hotter than men before they get sweaty.

So now we know that our anecdotal observation is real; men do sweat more. But why? Nothing in nature is ‘just because’; everything has a reason.

Timothy Noakes is Professor of Exercise and Sport Science at the University of Capetown, South Africa, and Michael Spedding is a pharmacologist who lives near Paris. But these are not your run-of-the-mill academics: Noakes  has run more than 70 marathons and ultramarathons. Spedding has run more than 100,000 kilometers and been a competitive athlete for more than 40 years. In the July 19 2012 issue of Nature they proposed that  we evolved to run. While early hominins were undergoing intense skeletal and metabolic changes, major changes also occurred in their brains. These changes have rendered us dependent on mental and physical exercise to maintain brain health. Exercise doesn’t just help muscles — it activates our brains, particularly through one pathway that helps to increase the number of neuronal connections.

Noakes and Spedding observe that “the ancestors of modern humans were omnivorous apes with bodies that were more suited to living in trees than hunting in open habitats. Over the past few million years, the climate underwent dramatic shifts and Africa changed from a largely forested ecosystem to a more open savannah. Our ancestors, caught at the edge of the retreating forests, became less adapted for climbing trees. By 2 million years ago they had evolved a skeleton that could support walking and running — partly so that they could hunt by pursuing individual animals for hours at a time.

From the Lascaux Cave in France, dated over 17,000 years ago.   Source: Wikimedia

For more than 1 million years there were no weapons other than stones or sharpened sticks. The best weapon was endurance. The predators had to outlast their prey, and so had many adaptations that enabled them to walk and run long distances, forcing their prey to gallop. Because four-legged animals cannot lose heat by panting and galloping at the same time, human hunters eventually drive their prey into heat stroke, so that the animal can be caught and killed with very simple weapons.

It is likely that humans also have a much higher metabolic capacity than our ancestors the apes did, measured by our ability to take up and use oxygen (VO2max). We are the only primates with the aerobic capacity to support long-distance running. It is otherwise restricted to migratory ungulates (horses, wildebeest) and social carnivores (hyenas, wolves). Humans evolved from animals with a low VO2max to the modern endurance athlete’s maximum capacity approaching 90 milliliters of oxygen per kilogram of body mass per minute.

The ability of humans to dissipate heat comes from our lack of body hair and capacity to breathe through our mouths and to sweat at rates of up to 3 liters an hour, much more effective than panting. In a 3-hour hunt — or in a marathon — fit humans can safely lose up to 10% of their bodyweight.”

How is the brain important in the hunt? All we need to do is observe the best predators. Wild dogs in Africa are considered to be amazing hunters. Their strategies of outflanking and cornering their prey are the subject of many nature documentaries. As they prepare for the hunt, and during the chase, they constantly communicate visually and vocally to execute magnificent maneuvers. So do female lions, and hyenas, and wolves, to name a few. And so do human hunting bands of isolated societies in the jungles of South America, New Guinea and the Sahel desert of Africa. Planning and communication require more extensive neuronal connections, bigger language areas (Wernike’s and Broca’s areas in the temporal lobes), and a bigger hippocampus and prefrontal cortex — key brain areas that are involved in spatial mapping, decision-making and control of context, fear and emotions.

We have written in the past about BDNF, which stands for brain-derived neurotrophic factor. Noakes and Spedd remind us that  circulating BDNF is increased by exercise, partly by release from the nerve–muscle junction into the blood. In muscle, BDNF can increase protein synthesis and fat metabolism, which are key targets of exercise. Mice that lack BDNF become obese and there are strong inverse links between BDNF and type 2 diabetes. In the brain, BDNF increases neuronal connections and is crucial for some aspects of memory. BDNF plays a part in the hypothalamus, controlling body weight and energy homeostasis. It also triggers the brain mitochondria — the powerhouses of the cell — to use oxygen more efficiently, in a similar way to how exercise helps to increase overall VO2max in humans.

Intriguing theory, and quite plausible. Obviously we can’t reduce our species evolution to running and BDNF. But there should be little doubt that it had a major influence on the way we evolved.

So why should guys perspire more? maybe because they were the hunters, starting over a million years ago until the relatively recent development of agriculture and a more sedentary lifestyle about 10,000 years go. Next time you see the guy in the gym drenched in sweat, have some respect: you are looking at the descendant of an elite long-distance hunter.

Can Neurological Problems Be Cured
August 15, 2022