Orthopedic rehabilitation is a constantly evolving field. Advances in science and an increasingly better understanding of orthotics have allowed doctors and other medical professionals to give patients more advanced rehab options. The Bioness L300 is a four-piece device that uses electrical stimulation on the thigh and calf to help move the leg. The four pieces aren’t physically attached to each other in any way. Instead, they communicate wirelessly. A gait sensor attaches to the shoe and notes whether the heel is on the ground. That information is then relayed to the leg cuff secured below the knee, as well as a cuff secured to the thigh. The internal electrodes provide stimulation based on the information communicated from the gait sensor. Lastly, the wireless control unit lets the wearer control the electrode level, ensuring a more comfortable experience.

The Ekso Suit may have only been the work of science fiction just a few decades ago, but it’s now being used and further developed to help patients retrain their bodies. Once a person is strapped into the suit, a physical therapist sets the length and speed of the steps and uses a computer command to trigger them. The patient then learns to trigger the steps; first by a button on the crutches, then by shifting body weight. This eventually lets the brain and body learn how to work in tandem, and the length and speed of the steps increase over time.

Underwater treadmills help patients get exercise and improve their mobility by providing a low-impact arena for rehabilitation exercises. Because of the body’s natural buoyancy, patients can improve their range of motion and quickness of strides without extra weight on the muscles, bones, and joints. Nintendo’s Wii gaming system is becoming more popular among orthopedic rehab centers. Through its use of motion sensors, the games on the Wii encourage active play. Because patients find more joy out of using the Wii than more traditional rehabilitation exercises, they’re more likely to use it regularly. They can also compete with other rehab patients, nurses, and family members. The added competition makes gameplay an activity that most people are willing to try harder to overcome. There are places like you can see at www.westendphysio.com to learn what exercises to do and if your Wii can help. Consulting professionals before you use your Wii as a rehab tool is extremely important. 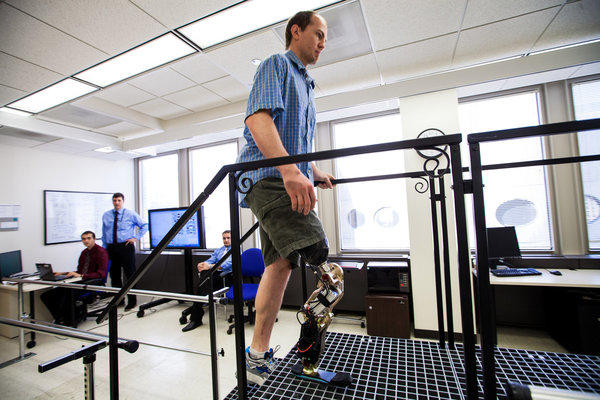 One technology that’s still in an early developmental stage is the thought-controlled bionic leg. Developed by the Rehabilitation Institute of Chicago in 2013, the bionic leg is a huge improvement over previous prosthetic legs. It works by rerouting nerves to healthy muscles. When the person wants to move the leg, the brain sends out electrical impulses to those muscles. Computers in the prosthetic leg read the impulses and tell the leg to move a certain way. This technology’s use of muscle signals instead of robotics allows for a more natural walking experience. These type of ideas are great and can be extremely profitable for the inventor, check out www.2innovative.net if you have an idea that you think deserves a patent or license.

From technology that sounds more like sci-fi than reality, to common gaming systems used in new ways, the world of orthopedic rehabilitation is growing. Scientists develop and introduce more technology every year, enabling patients a better chance at recovery.