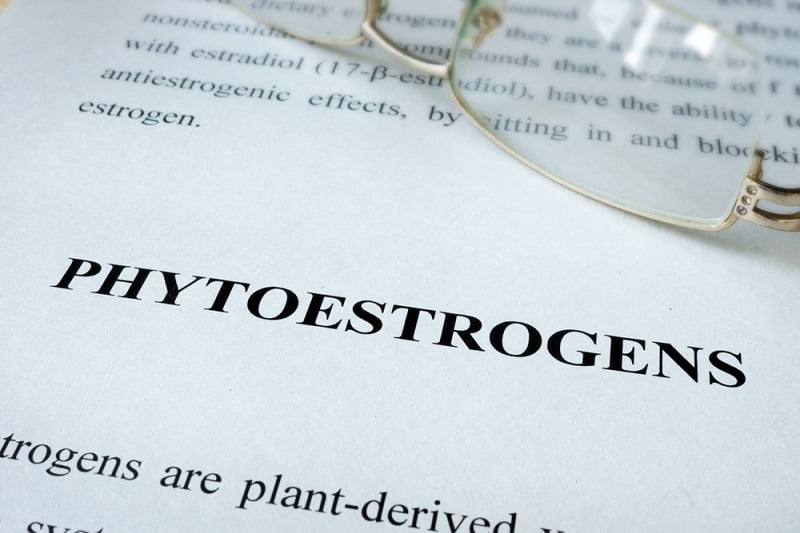 According to Women’s Health Concern the average age of women experiencing the menopause is 51. Also known as “the change” it represents a series of often uncomfortable physiological changes. While the symptoms can vary from person to person, in many cases additional therapies are sought to help deal with the consequences.

At the same time, many people are shunning (or supplementing) more traditional treatments like hormone replacement therapy in favor of alternative remedies. Indeed, according to the CDC roughly 40% of Americans have used so-called Complementary or Alternatives Medications (CAM) over the last 12 months. This is roughly equivalent to 70 million adults in the US alone looking for non-pharmaceutical solutions to their health complaints.

The word “phyto” refers to plants. Phytoestrogens can subsequently be defined as naturally-occurring substances of plant origin that seem to mimic the activity of estrogen in the body. This is of particular relevance during the menopause, when falling levels of estrogen in the female body are believed to be responsible for many of the symptoms experienced.

Where Do Phytoestrogens Come From?

As discussed, phytoestrogens are derived from plants. This means that a diet rich in a wide and varied range of plant matter may already be providing you with a measure of phytoestrogens. At the same time, some of the highest recorded levels can be found in plants that are largely absent from the traditional western diet.

While a range of different phytoestrogens have been identified, possibly the best-known and most heavily-researched classification are a group known as “isoflavones”. Plants like soybeans, legumes and fava beans have been found to demonstrate particularly high levels of isoflavones. Indeed, some experts have pointed to the reduced incidence of menopausal symptoms in some Asian nations as evidence that a diet high in soya may offer protective benefits.

Alongside the consumption of foods rich in isoflavones consumer demand has also led to a burgeoning supplement market, where products like soya isoflavones, black cohosh and red clover are popular for their high isoflavone content packaged in practical, easily-swallowed capsules.

The Health Benefits of Phytoestrogens

The medical community is still largely divided on the impacts of phytoestrogens, with some trusted bodies suggesting such supplements as beneficial, while others have reserved judgement.

One of the most common symptoms experienced by women undergoing the menopause is that of sudden, uncontrollable feelings of overheating. This is believed to occur in response to unexpected changes in the diameter of blood vessels; particularly those near the skin’s surface.

Such is the frequency with which feelings of “hot flashes” and “night sweats” are experienced that a wide range of different studies have been completed on the subject. While methodologies and strengths of the phytoestrogens provided vary from one study to another, the initial results do look quite hopeful.

In one meta-analysis, where the results of 19 different previous experiments were pooled and analyzed, significant improvements were observed. After curating the data in question, the scientists noted that, on average, the consumption of 54mg of soya isoflavones resulted in a 20% reduction in the frequency of hot flashes and a 26% fall in the severity of attacks. They also noted that the impact seemed to be dose-dependent, with higher doses leading to greater improvements, though cautioned that it could take some weeks of consumption before isoflavones reached “peak effectiveness”.

Other studies have pointed to even more extreme improvements in vasomotor issues. A study published in the Journal of the North American Menopause Society provided menopausal women suffering from hot flashes with either 60mg of isoflavones or a placebo for a period of 12 weeks. Throughout the experiment participants were encouraged to keep a journal of their “climacteric symptoms” which, on analysis, revealed a 43% reduction in night sweats and a 57% fall in hot flashes.

While the evidence to date is far from conclusive, it does seem to be convincing enough to encourage some trusted authorities to recommend its use. One example is the North American Menopause Society (NAMS) whose advice “recommends first considering lifestyle changes, either alone or combined with a nonprescription remedy, such as dietary isoflavones”.

The symptoms of the menopause aren’t just transitory, like hot flushes, which normally reduce in frequency and severity over time. Quite the opposite. Other physical changes in the body caused by the menopause can have far longer-term and more serious impacts. Of these, a reduction in bone strength is most common; a condition we refer to as osteoporosis.

While osteoporosis can and does affect both genders, it is particularly common among women that are experiencing, or have passed through, the menopause. Statistics from the International Osteoporosis Foundation suggest that one in three women over the age of 50 will experience a fracture as a result of the condition, and that nearly 75% of all hip fractures happen in women.

It is believed by experts that the sudden drop in estrogen associated with the onset of the menopause is largely to blame. This hormonal change results in fewer minerals (principally calcium and phosphorus) being laid down as bone tissue, leading to a range of issues.

Due to the size of the problem, and the cost to health services around the world, significant resources have been invested in the fight against osteoporosis. We know, for example, that regular exercise can help to encourage the body to strengthen bones, and that a diet that is high in the key components is also beneficial. It seems, in addition, that phytoestrogens may play a role in helping to slow down this loss of bone mineral density though the exact nature of action has yet to be agreed.

An interesting study published in the Annals of Internal Medicine involved 389 women illustrating symptoms of the menopause and low bone mineral density. Individuals were assigned to either a placebo group or 54mg of phytoestrogen per day for a study period of two years. Before and after the study period measurements were taken as to the bone mineral density found in the spine. The results of this extended study period were quite clear; those individuals receiving phytoestrogens increased their bone strength, while those on the placebo medication saw a significant decline.

Cardiovascular disease is known to be one of the major causes of mortality facing western populations. High cholesterol is known to be impacted by a range of dietary and lifestyle factors. For example smokers, heavy drinkers and the obese are likely to be at a higher risk of CVD. At the same time, medical developments have indicated a range of changes that can improve blood lipid profiles, including an improved exercise regime, a reduction in junk food consumption and the use of some plant-based supplements like sterols.

The changes occurring during the menopause are known to impact blood lipid levels, and may therefore increase the risk of cardiovascular problems. For example, studies have shown that postmenopausal women experience “significantly higher” concentrations of total cholesterol and LDL (“bad”) cholesterol.

Initial studies, while far from conclusive, have started to implicate phytoestrogens as another potential source of improvement in these otherwise potentially harmful levels.

In a large study involving 80 women, volunteers were assigned either 100mg of isoflavones per day or a placebo. This regimen was followed a period of 16 weeks, during which markers for cardiovascular risk were monitored. The experts found that the group taking isoflavones experienced a significant decrease in both total cholesterol and low-density lipoprotein when compared to the placebo group.

Oddly, other studies have found little or no impact. For example, another experiment where a larger dose of 150mg of isoflavones were provided found no significant changes.

For now, it seems, the jury is still out, though hopefully future studies will help us to understand the reasons for the disparity in results seen in similar and seemingly well-designed experiments.

It has long been theorized that phytoestrogens may have the potential to impact some of the negative consequences of the menopause on cognition. While the results of such studies seem far more varied than for other symptom categories, some studies have still unearthed potentially beneficial impacts.

In one such analysis a group of postmenopausal women underwent a range of psychometric tests before undergoing six weeks of supplementation with either 60mg of isoflavones or a placebo. Thereafter, the same testing was repeated in order to observe any differences that may be attributed to the use of phytoestrogens.

While, in truth, many indices showed little or no change, two metrics did show positive improvement; those of mental flexibility and of planning ability. As both these functions are controlled by the frontal lobe of the brain, it has been theorized that the impact of isoflavones may be concentrated in one specific area of the brain.

We are living in potentially exciting times for sufferers of the menopause. We now know more than ever before about the issues facing women at this difficult time of life, and about the causes of many symptoms. As research continues, we are discovering an ever-broader range of treatments to help sufferers deal with their symptoms. While the news on phytoestrogens is, as yet, not definitive, the results garnered so far do paint a picture of potential. Only through further investment into clinical studies can isoflavones hope to garner wider support from the medical community at large.

Matt Durkin is a qualified nutritionist with a Master of Science degree. Matt spends much of his time researching the impact of diet and exercise on health, and writes regularly at Healthy Life