Despite the demise of Joe Camel, Big Tobacco is still targeting our kids.  That is because, to use Philip Morris’ own words, “Today’s teenager is tomorrow’s potential regular customer.”  Or, as a Lorillard Tobacco document stated, “[T]he base of our business is the high school student.”  Or worse yet, per an R. J. Reynolds document, younger customers are “the only source of replacement smokers” for those who quit smoking or die from tobacco-related disease.  (eeeww…replacement smokers??!!)

According to the latest reports on tobacco marketing issues by the Federal Trade Commission (for 2007 and 2008), tobacco companies spend more than $1 million per hour – that’s right, per hour! – to market cigarettes and smokeless tobacco products in the US.  That comes to a total of $10.5 billion a year spent to lure folks into smoking a product that has been associated with so many adverse health effects…effects that we, in turn, have to spend billions and billions of dollars to treat.  Kind of crazy, no?

According to a recently released 2012 Surgeon General report, Preventing Tobacco Use Among Youth and Young Adults, the scientific evidence “consistently and coherently points to the intentional marketing of tobacco products to youth as being a cause of young people’s tobacco use.”  On March 21, 2012, the Campaign for Tobacco-free Kids (CTFK) released a video (see below) and a report on tobacco use outlining the ways in which Big Tobacco goes about inducing kids to smoke.  They highlight four major trends in tobacco marketing:

Now, we all know that large corporations understand what they are doing when it comes to marketing.  Just as the food industry has cleverly develop advergames to attract kids to their sugary sweet products, Big Tobacco has developed advertising strategies that will attract the folks they want (and need) the most – young smokers, vulnerable to addiction, and with a lifetime (albeit a shortened lifetime) ahead of them to keep on purchasing their products.

Despite decades of anti-tobacco campaigns, 25% of high school seniors are regular cigarette smokers;  another 20% uses smokeless tobacco.  Because they will have trouble quitting once addicted, it is estimated that 80% of teen smokers will smoke into adulthood.  And, per the Surgeon General’s report, half of persistent smokers will die about 13 years earlier than their non-smoking peers.

Among adults who become daily smokers of cigarettes, nearly all (88%) had their first puff by age 18; 99% by age 26.  Evidently, if you get them young, you can keep them.  So it is no wonder marketing efforts target youth.  Although Big Tobacco may deny this is their intention, the Surgeon General’s report notes that “advertising and promotional activities by tobacco companies have been shown to cause the onset and continuation of smoking among adolescents and young adults.”

The report concludes by recommending “coordinated, multicomponent interventions that combine mass media campaigns, price increases including those that result from tax increases, school-based policies and programs, and statewide or community-wide changes in smokefree policies and norms  [because they] are effective in reducing the initiation, prevalence, and intensity of smoking among youth and young adults.”

But, of course, all of this is going to cost money.   In this time of belt-tightening when proposals such as the Ryan plan propose drastic cuts to Medicare and Medicaid, it makes you wonder whether we have completely missed the point of public health.  Why are we spending billions and billions on treating tobacco-caused diseases and more millions on prevention programs, while allowing tobacco companies to spend, legally, a million dollars an hour to promote a product that not only has no redeeming features, it is actually responsible for killing almost a a half million of us every year? It’s a good question, huh? 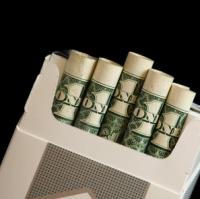 Among adults without diabetes, quitting smoking, compared with continuing smoking, was associated with a