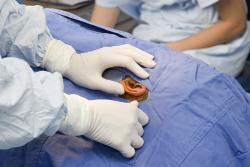 Congenital Hearing Deformities at the Brink of a Breakthrough 3D printing and 3D bioprinting in the field of medicine has done groundbreaking work, and a new team of scientists is close to the start of an exclusive trial that will change the lives of many children and youth.

3D printing and 3D bioprinting in the field of medicine has done groundbreaking work, and a new team of scientists is close to the start of an exclusive trial that will change the lives of many children and youth.

Professor Alex Selfalian from the University College of London and his team of researchers have been working on 3D printed ears, which could possibly be the answer to children born with microtia.

A congenital deformity where the external ear fails to develop, various degrees of microtia occur in approximately 1 out of every 8,000-10,000 babies. A completely undeveloped external ear is called anotia and medical intervention becomes necessary to lend as much form and function to the underdeveloped ear as possible.

The team at University College of London has created an exact replica of a human ear with the help of 3D scanning and printing technology and while the procedure has already been tested on rats with successful results, human testing is projected to begin soon.

The procedure that could mark the end of microtia in humans

The procedure in itself is quite incredible. A 3D scanner will first scan the patient’s normal ear, after which, the scan will be flipped to create a mirror-image copy. Once the scan has been developed into a 3D printable model, it will be printed in 3D with the help of a sponge-like plastic to create the structure of the ear. This scaffold will be implanted under the skin of the patient’s forearm for four to eight weeks.

During this period, the skin will grow around the scaffold and blood vessels will begin to function efficiently. The ear will then be healthy enough to be eventually detached from the forearm, and surgically attached to the patient’s head.

While statistics and research suggests that microtia affects approximately one in every 9,000 people, the bigger picture paints a different story. Ear Community, a U.S.-based nonprofit organization that supports children and adults born with microtia and atresia, has put together some numbers that are shocking.

In September 2010, there were 310 million people living in the U.S. of which, based on calculations, an estimated 34,000 people were living with microtia. Of the 61 million people living in the U.K. in August 2010, calculations suggest that approximately 7,000 of them suffered from some degree of microtia. In Australia, as of July 2010, an estimated 2,500 people out of 22.3 million were born with microtia.

This means, that of the 6.8 billion people living across the globe as of September 2010, an astounding 755 million were living with varying forms of microtia.

3D printing of ears: What it means for kids around the world

The procedure has already been tested on rats with exceptional results and clinical trials for human testing are scheduled to begin in India and the U.K. this year.

Approximately 5,000 children in India are born with one or the other form of hearing disability each year and a surgery of this sort will be life changing. Around 12 children in Mumbai, India have already signed up for the facial reconstruction surgery to test the procedure. With help from ‘hEAR FOR ALL’ – a group specially set up for the purpose – children suffering from hearing deformities as well as their parents will receive counseling during the course of the trial and treatment.

Up until now, children with congenital hearing deformities had to undergo extremely invasive surgeries to get the rib cartilage, followed by at least four to five operations to get a new ear. However, Dr Michelle Griffin from the University College Hospital is absolutely positive that with the 3D printed ears, the number of operations required will be limited to just one!

In theory, 3D printing of human ears sounds flawless. It brings with it the promise of changing not just the way organ transplant works, but also the way thousands of lives will be transformed. Voicing Professor Alex Selfalian’s opinion, I do believe 3D printing will soon reach a stage where human organs such as ears will be made to order over just a phone call.