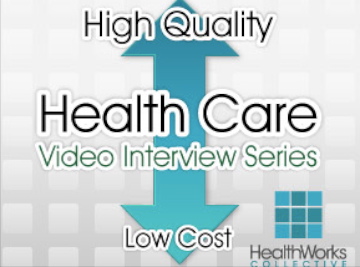 TRIMM is a controlled clinical trial under McKesson Foundation grant support that compares standard care, to standard care plus a semi-individualized mHealth program of 6-months’ duration designed to assist overweight, inner city minority adults recruited through Baltimore churches to change diet and other lifestyle factors in order to lose weight. Patients enrolled in TRIMM are sent text messages to help them change lifestyle behavior to be more healthy and lose weight.  Dr. Cheskin talks about the program, what it does, and some preliminary results.

If just a fraction of overweight people can change behavior with simple text messaging, this program would be worth it.  Healthier behaviors will bring higher quality of healthcare and will reduce the risk of chronic disease.  And now, watch and listen.

Joan:  Hello.  I’m Joan Justice with HealthWorks Collective.  And I’m here today with Dr. Lawrence Cheskin, Director of the Johns Hopkins Weight Management Center.  The mission of the center is not only to help people lose weight, but to help them build lifetime weight management skills.  Dr. Cheskin is the author of several books including losing weight for good, developing your personal plan of action.

He has appeared on numerous TV shows, and he also lectures to professional and lay audiences on diet and weight control.  I ask Dr. Cheskin to be here today to talk about TRIMM the Johns Hopkins clinical trial, which includes a six month son semi-individualized and health program to help overweight inner-city minority adult’s change their lifestyle behavior to lose weight.  Dr. Cheskin, please tell us a bit about Trim.

Dr. Cheskin:  Well, actually TRIMM stands for Tailored Rapid Interactive Mobile Messaging TRIMM for short.  And what it involves is time to reach people in a way that doesn’t require them to come to a doctor’s office or attend you know a weighty control program.  And TRIMM’s out that in the United States even the less privileged segmentsof our population inner city or folks minorities or they have to get more likely to use text messaging than those in more privileged positions.

So we felt this is a very viable method for reaching people who couldn’t afford to come to the Johns Hopkins Weight Management Center and spend a fair amount money to get their individual lives attention and yes make it both interactive and tailored to their needs to a certain extent.  We obviously kept it quiet as well as if you’re talking face-to-face so someone evaluating them, but we’re tempting to reproduce as much as possible the kinds of advice and the kinds of feedback you would get if you were in one of our face-to-face programs.

So we managed to get a grant from the McKesson Foundation to support this work that we’re very grateful for.  We wanted to choose populations that are not that well insured when it comes to weight control because insurance generally doesn’t cover weight control.

Dr. Cheskin:  And many people don’t even have insurance even if it did cover weight control.  So this doesn’t means that is pretty cost effectively we were finding because the cost is fairly minimum just the cost of text messages and they’re for one hour and 10 a piece [Phonetic] [0:02:48], and most people have plans where they can receive a certain number of text messages without any additional charge anyway so often this is very, very expensive for people.

What it does is we started off with one visit through our office to get a better sense of what the person would like to do, what the challenges are they faced and we came up with a semi individualized plan for them, and then the text messaging basically monitors them and teaches them various areas if they want to work on, so when they choose to work on walking or and eating this fried and fatty foods.  And they choose three topics out of eight topics that we had in the initial menu of options and they will get up to several text messages a day that educate them about this, and ask them about it so the end of the day they might get a message asking so we’ve been talking about kind of fitting extra physical activity in walking in your day.

Take a lot at the speedometer that you have.  How many steps did you take today and when they respond with number a text to response they will get a message factory encouraging them to do more or telling them it’s fantastic which then you could do in then.

Joan:  So its inter, its interactive and does anyone follow up is there any healthcare professional that follows up with the phone call or anything at all or is it just the text messaging?

Dr. Cheskin:  For the purposes of the study we did have them commit three months and a six months and a year just for a brief follow up not with the physician with a counselor basically.  But the ways that could be done either that how that how level though it would be ideal to further step would be integrate into the healthcare system so that this might refer their patients to have this and get feedback from the system automatically of the degree of engagement of the patient with the program and what their progress has been.

Joan:  And how many patients do you have in this study and how were they chosen?

Dr. Cheskin:  So we’re sure — we’re hoping to show is that this provides an advantage over the standard care of the usual way of doing.  And you go to your doctor every once in a while and we preached to you a little bit, and we come back, and you would have or you haven’t made any changes in your habits anyway.

Joan:  Okay and how are you motivating the patients?  Is it the text message and you said that then there’s a pat on the back if they have done a certain number of steps its or of they’ve eaten a healthy meal that kind of thing?

Dr. Cheskin:  Yeah so they get this interactive feedback through the text messages and that is surprisingly motivating for many people not for everyone.

Dr. Cheskin:  We got tired of it and stopped doing it, but there are many who sent things to us like it’s like having a buddy in my pocket you know.  It’s always there as if to your doctor who is not always going to be there [Indiscernible] [0:06:18].

Joan:  Sure.  What are the preliminary results?

Dr. Cheskin:  The preliminary results and we can’t say too much about it because we’re hoping that —

Dr. Cheskin:  — [Crosstalk] a bit but we’re seeing quite a bit of improvements in compared to the standard care with the TRIMM program in terms of weight control [Indiscernible] [0:06:37] peoples habits and behavior.

Joan:  Good.  So you have seen changes in behavior and you had seen weight loss and the patients how are they accepting the program.  I imagine they like it.

Dr. Cheskin:  Many like it.  Many had dropped out so it’s as with many treatments it’s going to be who likes it, who would drop it.

Joan:  Sure but those that stayed with it obviously do like it.  Do you know what the dropout percentage is percentage of people that have dropped out?

Dr. Cheskin:  It’s a good percentage to dropout and perhaps six months is too long to be doing this maybe you know we’ll learn from doing this what’s the correct now the time and the number of messages are.  We do individualize it to some extent.  We ask people you know if you’re going on vacation they can enter it on to the system if they won’t get messages or if they really want to get one a day instead of three a day so we try to individualize it then.

Joan:  Have more than half dropped out?

Joan:  Okay.  Well, that’s good to know and that’s what I would have expected to tell you the truth.  But even if you get a very small percentage I think it’s worth it.