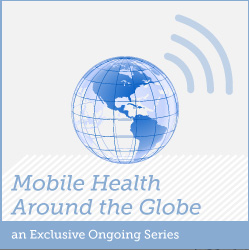 As John Sharp stated in one of his previous posts, “How Europe is Growing Health Apps” (http://healthworkscollective.com/node/28707), there are a number of individuals, institutions, companies and conferences in Europe innovating around the areas of Social Media, video, Apps, Gaming in healthcare.

As John Sharp stated in one of his previous posts, “How Europe is Growing Health Apps” (http://healthworkscollective.com/node/28707), there are a number of individuals, institutions, companies and conferences in Europe innovating around the areas of Social Media, video, Apps, Gaming in healthcare.

With regards to the mobile apps, one of the hotspots is Barcelona, which is the Mobile World Capital until 2018. The Mobile World Congress (http://www.mobileworldcongress.com/) took place here in Barcelona from February, 27 until March, 1, this year with special attention to smartphone apps.

One of the winners was Etisalat, with its mobile health innovation – Etisalat Mobile Baby – that is helping to combat maternal mortality in developing countries. Etisalat’s Mobile Baby program delivers affordable primary healthcare solutions to even the remotest regions of Africa and it has already demonstrated tangible results to meet Millennium Development Goal 5 (MDG5) which seeks to reduce maternal mortality in childbirth by 75 percent and deliver universal access to reproductive health by 2015.

The app is developed in partnership with Qualcomm, D-Tree International and Great Connection. Etisalat Mobile Baby is a complete mHealth ecosystem that brings together medical healthcare professionals, NGOs, pharmaceutical and insurance companies, and federal and state government to deliver affordable healthcare for all powered by mobile connectivity.

In Tanzania where Etisalat first launched the service, there has been a substantial drop in baseline maternal mortality rates and a 30% increase in the in-medical facility delivery rate. During 2012 the Etisalat Mobile Baby service will be rolled out across its operations in Afghanistan, Pakistan, Sri Lanka, Ivory Coast, Benin, Togo, Niger, Central African Republic and Gabon.

But mobile apps and healthcare innovation is not a one-week event here in Barcelona. The healthcare ecosystem

Hospital Sant Joan de Déu (HSJD), located in Barcelona, is a teaching hospital specializing in the fields of pediatrics, gynecology and obstetrics. HSJD is the largest children’s hospital in Spain, one of the top5 in Europe, along with Great Ormond Street (London), Hôpital Necker Enfants Malades (Paris) and Ospedale Meyer (Florence), and one of the reference points in Europe.

In 2010 the hospital started the project H2O – Liquid Hospital, an initiative which seeks to radically transform healthcare through an intensive use of technologies oriented towards the patient. The video below shows a presentation on Project H2O:

For More information visit this site.

HSJD aims to be a Liquid Hospital, going beyond the physical building blocks of the hospital. HSJD is one of the most relevant European examples where a hospital is using online care, telemedicine, mobile apps and health 2.0 tools to put the patient in the centre of care. At HSJD we see more and more doctors prescribing links and apps to our patients.

Aligned with his strategy, HSJD organizes the first competition at the European level on apps for health/fitness/wellness, on March 19th. Apps ON Health is the first competition in Europe that brings together international thought leaders to explore the business opportunities of mobile apps in the healthcare and wellness industry. This will be the first time that clinicians, nurses, patients, developers, agencies,… will get together in a competition, Apps ON Health, to find new paths to deliver care in more efficient ways.

Prior to the competition, a conference will take place. Keynotes from experts such as Chia Hwu (founder and CEO, qubop, Silicon Valley), Dan Philips (director of Healthbox, one of the 3 main healthcare incubators in the USA, located in Chicago) or Lekshmy Parameswaran, founding partner of fuelfor, an innovation design consultancy specialized in health care. On top of that, there will be three additional round tables where topics such as patients’ needs, usability and user experience and monetization will be discussed.

SOME INTERESTING APPS DEVELOPED IN EUROPE

Out of the 45 apps submitted, our online jury has selected 10 apps, which will be presented on stage on the day of the event. The AppCircus ON Health competition will start at 16:45, right after the conference.

Some of the submitted apps include the following:

The on stage jury will select the winner app which will get two prizes. The winner will get the chance to perform a live 3min demo in Doctors & You 2.0, the International Healthcare Social Media & Web 2.0 Conference in Europe (May 23-24 2012, Paris).

The winner will also have the possibility to win a nomination to the Mobile Premier Awards, during the 2013 Mobile World Congress.

If we analyze the 45 apps submitted, from the perspective of who has developed them, there are four group types:

This one day symposium will focus on the challenges and solutions mobile health offers. Best practice stories of use of mobile devices and technology by clinicians in care delivery, examples of ROI and successful business solutions will be presented alongside an insight into what is out there and what works!

I will post here the summary of both events here at HealthWorks Collective. Europe is on the rise. Stay tuned!

Tags: Mobile Health Around the Globe

Mobile Health Around the Globe: Gene-RADAR Can

Nanobiosym is a company that uses physics and medicine to fight disease. Dr. Anita