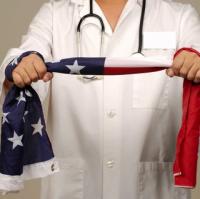 House GOP Brings Obamacare Up to a Vote (Again) This Week

Republicans are going after the red meat in the wake of not one, not two — but three concurrent potential “situations” that make damage control somewhat imperative for the Obama administation. Unsurprisingly, some GOP senators are using these events as a means to undermine the SCOTUS-sanctioned ACA.

Republicans are going after the red meat in the wake of not one, not two — but three concurrent potential “situations” that make damage control somewhat imperative for the Obama administation. Unsurprisingly, some GOP senators are using these events as a means to undermine the SCOTUS-sanctioned ACA. Whatever becomes of that effort, Republicans have (yet again) been scheduling a time to formally vote on an Obamacare repeal.

Depending on whom you ask, this will be the 33rd or 37th time that lawmakers have attempted to repeal all or part of the health-care reform law, now called “Obamacare” by both critics and supporters. The House is scheduled to vote again this week on a bill to repeal the entire law, a move designed to put about 30 House GOP freshmen on the record as opposing the legislation and supporting a full repeal. Perhaps playing to the GOP’s base may gain some traction again in the wake of Benghazi, the IRS, and now, the AP scandals. A 37th vote (who’s counting?) this week may also serve as a message to new GOP members in the 113th Congress that Republicans have their sights set firmly on 2014. Although this is nothing more than a Groundhog Day moment for the House (the Senate was never considered to take these multiple attempts seriously at potential passage), it is a possible mechanism for stoking the flames of increasing bipartisan concern over how President Obama’s WH is handling things in this very critical moment in his young second term.

House Majority Leader Cantor (R-VA) likes the odds, because apparent support of the ACA is little more south than previous polling has demonstrated — an April Quinnipiac survey [PDF] found voters disapprove of the ACA, 46 percent to 41  percent. By a 37 percent to 15 percent margin, respondents say it would hurt  them more than help them personally, while 41 percent say the law wouldn’t  affect them. But when it comes to allowing more people in their state to qualify  for Medicaid, 48 percent to 41 percent believe expansion is a good idea. Still, the anti-sell on Obamacare is an uphill battle for the GOP, who appear to be taking its current strategy on Obama’s #1 signature domestic achievement from the Election ’10 playbook that drove the House majority back to the GOP.