Why Did Health Spending Slow Down Before It Sped Up?

What’s the reason? Many people blame it on the Affordable Care Act (ACA), more popularly known as ObamaCare.

What’s the reason? Many people blame it on the Affordable Care Act (ACA), more popularly known as ObamaCare.

But this assessment contrasts markedly with the picture the president painted for us only a few months back when he said that “health care costs are growing at the slowest rate in 50 years.” He and members of his administration attributed that to the ACA.

So which view is correct? Probably neither. It’s too soon for ObamaCare to have resulted in a big boost in spending. And the previous slowdown was underway over a decade. (See the chart).

Over the longer period, what does track the slowdown very closely are three other developments: the growth of Health Savings Accounts (HSAs), the growth of Health Reimbursement Accounts (HRAs) and the general trend toward higher deductibles. All three changes mean that patients are paying more medical bills out of their own pockets. And that has produced profound changes — both on the demand and the supply side of the market.

HSA plans have a high deductible, in the range of $2,000 to $6,000 a year or more. High deductible plans have lower premiums and the premium savings help fund the HSA, which pays for health care costs below the deductible. These amounts roll over tax free from year to year and are available for future health care or other expenses in retirement.

The opportunity to have an HSA plan was created by legislation in 2003. Participation in HSAs has been growing by double digits every year since then.  They grew by 22% in 2012, with total HSA assets soaring to nearly $15.5 billion.  There has been parallel growth in HRA plans, a similar arrangement commonly offered by large employers. Today, close to 30 million Americans are covered by consumer-directed health plans.

In fact, enrollment in consumer-driven health plans probably now exceeds enrollment in HMOs.  The 2013 annual Kaiser Family Foundation survey reported that one-fifth of all workers are now enrolled in these plans, up from 8% in 2008. And as individual accounts have grown, national health spending growth slowed.

What about ObamaCare? Over the past three years almost all the significant features of the new legislation have increased, rather than reduced, health costs — providing risk pool insurance to the uninsurable, forcing private plans to cover more benefits, and adding such extras to Medicare as free “wellness exams” and closing the prescription drug “donut hole.” Serious people expect ObamaCare to increase costs even more in future years. Medicare’s actuaries project that ObamaCare will add $625 billion to total health care spending over the next decade. The RAND Corporation predicts that ObamaCare will increase health insurance costs by almost $2,000 by 2016.

HSA accounts give people the opportunity to manage some of their own health care dollars. And when people are spending their own money in the medical marketplace, they are usually more careful shoppers than when they are spending money that comes from a third-party payer — an employer, an insurance company or government. That is why a 2012 Rand Corporation study found that people in HSA plans spend 21% less on average on health care in the first year.

The emergence of so many people paying for care with their own money is also changing the supply side of the market. Nationally, 1,300 walk in clinics post their prices and provide timely care. Free-standing emergency care clinics and Doc-in-the-Box outlets have now arisen to complement them. The first mail-order prescription drug organization, RX.com, was also driven by cash patients saving time and money. Walmart now offers $4 generic drugs financed by cash, not costly insurance. Phone and email consultation services are another development.

HSAs are advantageous for vulnerable populations, particularly the sick and the poor. Because they have complete control over their HSA funds, the sick become empowered consumers in the medical marketplace. Because they can pay for care themselves out of their HSA account, the poor have ready access to a wide range of providers.

HSAs and their incentives have proven very effective in controlling costs in the real world. Total HSA costs have run about 25% less than costs for traditional health insurance. Annual cost increases for HSA/high-deductible plans have run more than 50% less than conventional health care coverage, sometimes with zero premium increases.

As HSAs and similar plans have soared in the private market, health-spending growth has plummeted. That reflects the success of market competition and incentives. 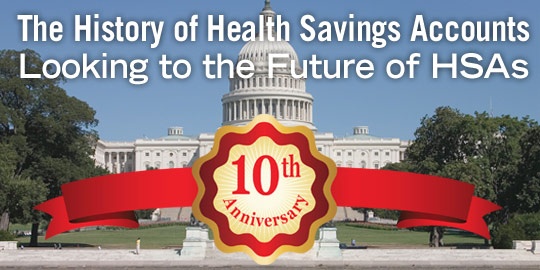 On a wintry Monday night in Washington, about 70 people gathered at a banquet