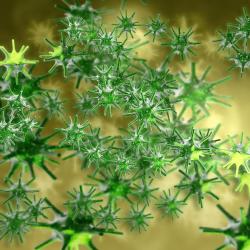 I’m going to let you in on an open secret: most cancer victims don’t die of their primary tumor. They are killed by metastases to distant organs. Fair enough; but what is so important about that? Well, think of it: if we could inhibit the proliferation of metastatic cells, we could make cancer a chronic disease, if not outright curable.

I’m going to let you in on an open secret: most cancer victims don’t die of their primary tumor. They are killed by metastases to distant organs. Fair enough; but what is so important about that? Well, think of it: if we could inhibit the proliferation of metastatic cells, we could make cancer a chronic disease, if not outright curable. No wonder there is an enormous research effort to understand the biology of metastasis. But the beast does not give up its secrets easily, and without a deep understanding of what’s going on there we won’t be able to vanquish it. A recent publication in Nature Cell Biology ( vol. 15, 807-17, 2013) by Ghajar and his colleagues is a major step forward in solving the puzzle.

As far back as 1986, a Harvard pathologist, Harold Dvorak, published an intriguing paper in the New England Journal of Medicine (vol 25, 1650-1659, 1986) titled “Tumors: wounds that do not heal”. The gist of the paper was the observation that in order for a wound to heal properly it needs a rich blood supply. The blood vessels are attracted to the wound site by factors secreted by inflammatory cells, exactly the same as in tumors. The difference is that in a malignancy tumor cells also secrete those factors, known as angiogenic factors. Another difference: when a wound is healed, secretion of angiogenic factors comes to an end. Not so in tumors; angiogenesis continues unabated. Dvorak also identified a protein that was responsible for this angiogenic factor, which he called vascular permeability factor, or VPF. Years later, a seemingly different protein called vascular endothelial growth factor, or VEGF was shown to have similar angiogenic activity. Well, the two proteins turned out to be one and the same. Shortly thereafter, bevacizumab, aka Avastin, an inhibitor of VEGF, was developed and is now incorporated into the treatment of a long roster of cancers.

Problem solved? Not so fast. If VEGF was the only factor responsible for metastatic tumor formation, we would expect Avastin to permanently arrest its development. Yet, we know that metastatic cells can stay dormant for months or even years before they pop up on MRI or PET scans as fully grown tumors, even in the presence of Avastin. What kept them dormant? And why did they spring into action?

This is where the paper I mentioned at the top comes in. The investigators studied human breast cancer cells, and using both a mouse model and an in vitro model, showed that dormant disseminated tumor cells are not resting just anywhere; they sit on the endothelial cells of the lung, bone marrow and brain-organs that breast cancer metastasizes to. This perivascular location is responsible for maintaing their dormant state; the endothelial cells secrete a protein, thrombospondin-1, or TSP-1, which suppresses the tumor cells’ growth. So how do the tumor cells escape the dormant state? Turns out that this suppressive environment is present only around the stable and mature vasculature. But around the growing tips of the vessel there is a growth-promoting environment, mediated by the proteins periostin, tenascin-C, fibronectin, and tumor growth factor β 1.

Going back to Dvorak’s remarkable insight, in a normal healing wound there are no tumor cells sitting on the endothelial surface; angiogenesis proceeds to completion, and the wound is healed -end of story. But if there is any tissue damage, however minor, and there are dormant tumor cells slumbering on the endothelial cells, the formation of a growing tip of of a new vessel will cause the tumor cells to spring into action and proliferate. Result: a new met.

The importance of the paper by Ghajar et al does not stop with the detailed understanding of the vessel/tumor interaction. It identified the protein signals that control this interaction. And that opens the door to a rich trove of potential targets for therapy. TSP-1, the protein that keeps the tumor cells in dormancy, could be a target for augmentation. The factors at the tip of a growing vessel could be targets for inhibition.

Every time science makes such a fundamental advance we are tempted to fall into polyannish reverie. Is “the cure” at hand? most likely not; biology likes to dole out its secrets sparingly. But no doubt, this contribution is of major importance, and advances in therapy are certain to follow.