When physicians who are used to carrying paper charts start using tablets or desktop computers in the exam room, it’s going to be disruptive, said Larry Garber, MD, an internist and medical director of informatics at the Reliant Medical Group in Worcester, Mass. How a physician manages this disruption “can absolutely make or break the relationship between doctor and patient,” he said.

When physicians who are used to carrying paper charts start using tablets or desktop computers in the exam room, it’s going to be disruptive, said Larry Garber, MD, an internist and medical director of informatics at the Reliant Medical Group in Worcester, Mass. How a physician manages this disruption “can absolutely make or break the relationship between doctor and patient,” he said.

About five years ago I observed that most EMRs are not ethnologically designed resulting in  a less than optimal machine-human interface.  About three years ago tablet PCs came into being, and HER vendors ported their EMR to that interface and/or smartphones. While this improved the situation somewhat, some patient-physician interactions  remain.

Several medical schools have realized the impact bad communication can have on patient satisfaction and outcomes. They have built communication skill-building into their curricula to help prevent this unintended consequence from technology use. But even absent formal training, it’s not too late for practicing physicians to acquire these skills with a few small steps:”

There are many outstanding clinicians who falter when adapting to an EMR, some of which has to do with a new work stream, resulting in frustration and anger.

By preparing oneself going into an EMR and dealing with the most important issue..the patient-physician relationship– stress can be reduced.  Learning how to use the EMR is only a portion of adopting HIT. 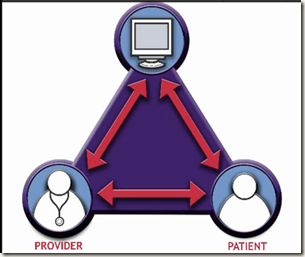 “The computer terminal should never be the first place the physician goes when entering the room. The doctor should go to the patient first, greet him or her and establish an agenda for the visit. After that is done, the doctor should have some kind of transitional line explaining what he or she is about to do in the EHR, such as, “OK, let me jot down a few notes.”

L:Let the patient look on. This goes back to the triangle setup that allows the physician to easily share things on the computer screen with patients.

E:Eye contact. Dr. Garber said there is no hard and fast rule of how eye contact should be measured, but he treats every patient encounter as he would a conversation with a friend or family member.

Physicians who struggle with their EHR sometimes vent their frustrations to patients. “That frames the computer in a negative way to the patient,” Dr. Stream said. “Positive framing is really important. Physicians have got to set it up that the computer and EHR [are] there for the patient’s benefit and not describe it as a nuisance or an irritation.”

E:Explain what you’re doing.  It’s important for doctors to be transparent about everything they do. Talking through each step — “I’m sending your prescription now” or “I’m looking up those test results” — will make patients more comfortable. It also will help alleviate the perception that the doctor is doing something else, like checking emails or sports scores.

L: Log off. A big fear patients have about technology is the security of their data. Logging off while they are still in the exam room makes them confident the next patient won’t walk in with their information still on the screen, Dr. Garber said.

EMRs are here to stay, be proactive in using it. One idea is to have a survey regarding the patient’s experience with your office and the EMR, in order to judge your effectiveness in communicating to your patient while you work. Admittedly, multi-tasking can be a challenge.

A suggested survey is available and can be downloaded here