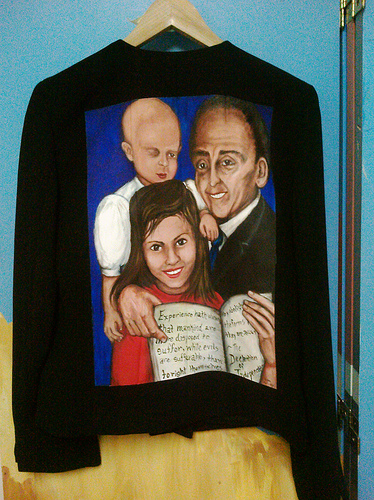 by Regina Holliday 12 min read
My children often laugh at my rather empty cache on iTunes. For a very long time I had downloaded only one song and that was Martina McBride’s “Independence Day.” If you need a refresher on that song you can hear it here and the refrain is written below:
“Let freedom ring, let the white dove sing
Let the whole world know that today
Is a day of reckoning.
Let the weak be strong, let the right be wrong
Roll the stone away, let the guilty pay
It’s Independence Day.”
Last 4th of July, I listened to that song in continuous rotation all day as I painted Julia Hallisy’s jacket: “Independence Day.” Julia Hallisy is one of the stalwart defenders of patient safety in this nation.  Today I want people to realize how much she and her family has been hurt by the current care system.
Julia’s Father’s Death: Julia’s journey into healthcare harm began with her father Tony Bajone (legal name was Julius George Bajone) in 1988.  Kidney stones were bothering him and went to the VA in San Francisco for treatment.  It was determined that he needed surgery and pre-op studies were done, including a chest x-ray. Since he was a smoker, Julia asked his doctor if the chest film looked ok and was told the results were fine.
Nine months later Tony started coughing up blood.
A first year resident told the family that it was shame that they hadn’t followed up with the chest film results. Julia was stunned and asked what the film had shown.  The results had shown a large mass in his lung. The radiologist had written a report saying follow up would be needed immediately.  Tony’s lung cancer that had gone untreated and at this point was terminal. Julia requested Tony’s medical records and the radiology report was not included. The VA said it was “missing” or didn’t even exist. Julia went to the medical records department and told the staff that it did indeed exist.
They miraculously found it.
Julia’s Sister’s Death: Donna Bajone, Julia’s sister, was born with a congenital heart condition that required surgery as a child. At the age of 25 she developed an irregular heartbeat. Donna went to Stanford University where she had been receiving care since she was 2 years old.  She had no health insurance.  Donna was too old in 1992 to be on her parents plan. (This lack of access has been addressed in the Affordable Care Act or what some folks call Obamacare) The bank she was working in kept her work schedule just below the number of hours to get insurance.  Stanford did place a pacemaker in Donna on an emergency basis, even without the insurance. They released her in a few days and the facility requested she get on welfare if she wished to receive any additional care. Donna continued to experience an irregular heartbeat and several calls to Stanford did not help. They would not see her until the insurance or Medi-Cal coverage was available.
She died in her sleep less than a week later.  Julia and her family tried to get access to Donna’s medical records after her death and they did not receive them for months.
Julia’s Daughter’s Life and Death: Kate Hallisy died of Cancer at 10 years of age.

In 1989 five-month old Kate was diagnosed with bi-lateral retinoblastoma, which means she had malignant tumors in both eyes.  This is usually a very treatable form of cancer, but things did not go well for little Kate.  At 18 months Kate underwent surgery to remove her right eye.  She had her right leg amputated in 1997 due to bone metastasis.   In her last months the cancer spread into her brain.  All throughout the family’s 10-year struggle they fought for appropriate care often finding themselves at odds with their insurer.  In addition to being the caregiver of a very sick child, Julia would become the communication channel between the doctors and insurance; all while maintaining her dentistry practice.  As the cancer spread they would have to fight for appropriate drugs to maintain a quality of life as Kate’s small body filled with cancer.

They even had to fight for access to an oxygen machine in Kate’s last months.
Julia wrote a book detailing her struggle to provide care for her daughter and to help others in their fight entitled The EmpoweredPatient.
For this is a fight.
There are folks who wish to join The Walking Gallery and hope to get a “pretty jacket.”  Julia has this one.  It is filled with beauty and pain.  She has the weight of her family on her back.
I listened to “Independence Day” while I painted this because the pain she suffered is the same kind of terror as living for years in a home filled with abuse.  Trust me, I know, I have suffered through both and they feel much the same.
Today is that day of reckoning.
This painting and my mural 73 Cents both contain the same quote from the Declaration of Independence:  “Experience hath shewn, that mankind are more disposed to suffer, while evils are sufferable, than to arm themselves by abolishing the forms to which they are accustomed.” We need a safe way to report harm and abuse in they system.  Please comment before July 8th.

Do it for me. Do it in the memory of Fred Holliday II. Do it for three generations of Julia’s family who did not get to celebrate this Independence Day. 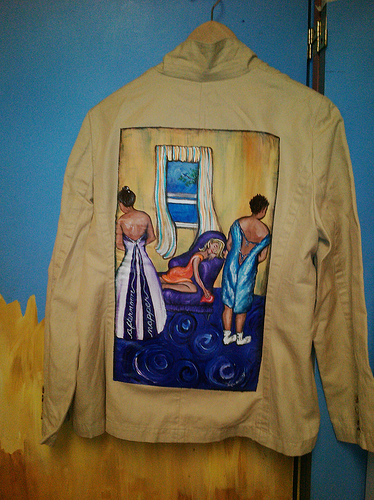 What if you were alone and suffering? What if it felt like no one