The race for the cloud is on with medical records as if you read here the last couple of days we had stories on United, Blue Cross and Aetna with their cloud services.  I like the sound of this design so far as we have “scientists” involved here and they work with the IT folks so it doesn’t get any better than that and this move is beyond just “revenue cycling” talk that we have all had up to our ears. 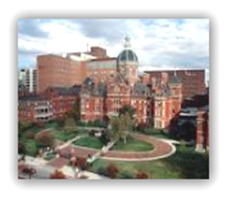 Also in on the project are VMware and Intel.  A few months back I sat next to an enterprise VMware rep on a flight and about talked his ear off as I asked a ton of questions since he was here in California working with hospitals.  The project will be called the Peake Secure Medical Cloud. Peake cloud stores three copies of each medical image in a cluster, which is right along the line of what Hadoop does for data sets.

They have chosen an open source clinical image and object manager.  They are also creating their own MPI (master person index).  The entire design is to keep the images secure on the back end with virtualization and will support all flavors of clients to of course include desk tops and can be pushed to a phone or tablet as well so no more expensive work stations in the future here.  Two of the Johns Hopkins hospitals will be testing out the code for the private cloud.  A public cloud will come later this year.

3 data centers is all that Peake says is necessary to service the entire east coast and there will be algorithms that will do the “least cost routing” to select the closest server to link up to.  Peake will sell storage space just as cloud servicers do and the pricing for all of this has not been set so looks like United and their cloud already have some competition, and I kind of like having the IT services NOT owned by an insurance company and do like the involvement here of the scientists as any one in genomics knows those are also huge data sets.

One of my sponsors for the Medical Quack did a nice interview at AdvaMed this year with Johns Hopkins and they talk about not only health IT partnerships but clinical as well and their door is open to talk as Helen Montag states in the video below.  The site , StockNewsNow also has a grouping of many biotech and Health IT companies they interview at conventions and in just doing the site I get educated about healthcare technologies that I have not hear of before too.  BD

Medical and IT researchers at Johns Hopkins University, healthcare application software supplier Harris Corp, and virtualization juggernaut VMware have teamed up to create a medical imaging cloud that they hope will become the central, secure repository for US citizens and the doctors who care for them.

The desire to provide doctors in America with electronic access to medical records is as old as computing itself and sits right alongside the holy grails of the paperless office and fifth-generation programming languages. But Jim Philbin, who is co-director for the Center for Biomedical and Imaging Informatics at Johns Hopkins, tells El Reg that the combination of broadband networks, virtual desktop infrastructure, and cloudy infrastructure is making a medical imaging cloud a technical and economic possibility. Philbin is also CTO at Peake Healthcare Innovations – a partnership between the university hospital system and Harris Corp that was formed two years ago to tackle the medical imaging issue – and he says that Peake intends to build and operate just such a cloud

Harris Corporation is a $5bn company with 16,000 employees – 7,000 of them are scientists and engineers – and is no slouch when it comes to either high tech or medical systems. The company builds radio, broadcast, and satellite communications systems for militaries and public agencies; has a healthcare application and systems software business that has been around forever; and also provides IT services. But rather than take on the medical imaging cloud all by its lonesome, Harris decided to partner with Johns Hopkins and use the university hospital system, which operates six hospitals around Baltimore, Maryland, as a testbed for the cloud before rolling it out nationally. Harris has the tech and Hopkins has the clinical and medical research expertise.

The Peake medical records cloud, called PeakeSecure, is back-ended by x86 servers, as you might imagine, which are running VMware’s ESXi hypervisor and vSphere server virtualization management stack.

6 Amazing Benefits of Cloud Computing in

Cloud computing isn’t a new term for any industry, and certainly not the healthcare

The Cloud Is Revolutionizing Healthcare