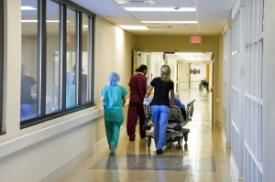 A medical procedure can be the most emotional, frightening thing to go through. Yet, healthcare is so technical and process-driven that the emotions around it so often go overlooked.

A medical procedure can be the most emotional, frightening thing to go through. Yet, healthcare is so technical and process-driven that the emotions around it so often go overlooked.

Schwartz oversees a team of 60 people charged with using design thinking to put some emotion into the company’s products, taking into account the user experience of not just the doctor but the patient as well. How, he posed, do we go about making healthcare less of an abrupt and startling diversion from ordinary life?

First, Schwartz said his team likes to observe how users behave, rather than asking them to describe how they behave. For example, a trauma team knows the process of delivering a patient to the emergency room like the back of their hand. But if asked to describe that process step-by-step, they’d likely leave out some of the things they don’t even realize they do, like fumble with tubes and wires. Those things, which Schwartz called “the zone of supposed paradox,” is often where the opportunity to innovate hides.

Once there’s a better understanding of the problems to be solved, it’s time to design. One of the questions Schwartz said his team considers is how to make a device feel like something a patient would see somewhere else. He showed a conceptual design of an MRI machine developed with inspiration from a pair of open, caring hands, to convey more of a feeling of comfort as the patient is rolled into the machine. Another conceptual image showed the inside of the device subtly decorated with patterns and shapes, to give patients something to look at once they’re inside the machine.

Finally, Schwartz recounted the importance of a diversified innovation and design team. “We never work by ourselves; we work in ensembles. Everybody is an owner,” he said. That includes bringing in groups from outside of the department sometimes, too. “In some projects we’ve done in recent years, the most IP has come from the HR people — go figure that.”