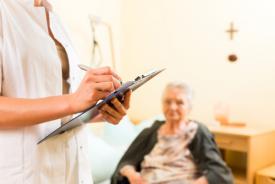 In its ruling upholding the Affordable Care Act, the Supreme Court did allow states to opt out of the expansion of the Medicaid program, which serves the poor. My feeling at the time – and still today – is that you’d have to be pretty ideologically rigid and stubborn or just plain uninformed to turn down the expansion.

In its ruling upholding the Affordable Care Act, the Supreme Court did allow states to opt out of the expansion of the Medicaid program, which serves the poor. My feeling at the time – and still today – is that you’d have to be pretty ideologically rigid and stubborn or just plain uninformed to turn down the expansion. The feds pay 100 percent of the expansion’s cost in the first three years and at least 90 percent thereafter.

Try hard and you can find reasons to oppose the expansion — maybe the feds will go back on their word, maybe Medicaid will make people lazy– but these are hypothetical and farfetched. Meanwhile, the costs of not expanding Medicaid are very real, in the form of billions of dollars in foregone funding for the provision of healthcare to the poor and the undermining of communities that lose their hospitals.

Twenty-four states, including almost the whole South, took the stubborn path and have so far refused to expand Medicaid. They’re starting to experience the consequences.

A George Washington University study reveals that more than 1 million patients who use community health centers will lose out on coverage because their states refused to expand. One-third are in five Southern states: Alabama, Florida, Georgia, Louisiana and Mississippi.  That’s putting a strain on community health centers, many of which will lack the funding to provide needed care.

Meanwhile a Wall Street Journal article (Rural Hospitals Feel Pinch) highlights the strains confronting rural hospitals as the world changes around them. The article features a hospital in a rural North Carolina community that’s closing. In the 21st century, losing a hospital is a major blow for a town or rural region. It’s often the biggest employer, a major driver of other local businesses, and a key to quality of life. Once it’s gone it’s not coming back any time soon.

Failure to accept the Medicaid expansion isn’t the only reason rural hospitals are struggling, but it’s a big part of the equation. Southern politicians are trying to make policy changes to shore up rural hospitals, but their efforts are a drop in the bucket compared to the funds that flow from the feds.

Rural America is the most Republican part of the United States. At least on Medicaid expansion, many rural citizens are poorly represented by the people they vote for. There’s an election coming up in November and folks would be wise to re-examine their assumptions before casting their ballots.