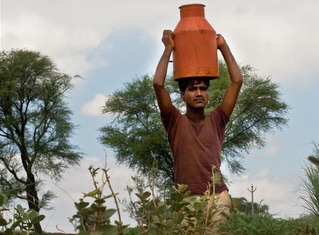 Mobile Health Around the Globe: The Real India – mHealth and Beyond Over 72%  (that would be over 620 million) of India’s population lives in its 638,588 villages. It is hard to believe but in India a common man is most indebted to healthcare after dowry. Most families earn less than $1/day and some of the major initiatives by NGOs suffer as there is so much distrust about Government policies and efforts in the country.
In villages, healthcare in India still starts from security, clean drinking water, better sanitation facilities and good roads. Then comes the demand for basic access to healthcare. …
There is 1 doctor per 1000 people, but 1 NGO per 400 people in India. As per 2011 stats (World Bank), the % of GDP contributed to healthcare in India is 4.2. We are laggards when compared to countries like Afghanistan (7.8%), Yemen Rep.(5.2%), Uganda (9%), Nepal (5.5%). There is one NGO for less than 400 Indians, and many times the number of primary schools and primary health centers in India. My intention here is not to blame the Government here but to help understand the ground realities better.
Most of India’s estimated 1.2 billion people have to pay for medical treatment out of their own pockets. According to a report by the Federation of Indian Chambers of Commerce and Industry- Less than 15% of the population in India today has any kind of health-care coverage, be it community insurance, employers’ expenditure, social insurance etc. One of the major reasons that India’s poor incur debt is the cost of health care. Ajay Bakshi, a good friend and CEO of Max Healthcare mentioned, “We charge our patients about $400 to $500 per night in our hospital. But rather than treat one million customers at this rate, how do we instead treat 100 million customers at $10 per patient? The move from a high-ticket, low-volume operation to a low-ticket, high-volume operation is very difficult. Nobody in our industry knows how to do this.”

The question hence is, Can mHealth bring down healthcare costs? Is it a far-flung reality for the common man or feasible? The answer is YES. Here is one such case study that will help us understand the revolution mHealth can bring to India’s otherwise waning healthcare system.
E-HealthPoint combines water and wireless to provide healthcare in rural India- E Health Points (EHP) are units owned and operated by Healthpoint Services India (HSI) that provides families in rural villages with clean drinking water, medicines, comprehensive diagnostic tools, and advanced tele-medical services that bring a doctor and modern, evidence-based healthcare to their community.
They provided 4 basic things:
1. Rural broadband
2. Good telemedical software
3. Modern point-of-care diagnostics mobile diagnostics
4.  Cheap water treatment

This is a for-profit social enterprise. They pay their doctors about 30,000 INR per month.  They pay their village health workers as well.  They pay their unit staff that they hire and train from the village.  They also re-cover those costs with patient fees.That’s what’s amazing – that they were able to do a reasonably good service, in an area where there wasn’t any, and make enough to cover their costs.  That’s what’s revolutionary – that it’s sustainable.
Editor’s note: Watch this eHealthPoint video for more information:
To be continued..Ideas welcome..
References: http://data.worldbank.org/indicator/SH.XPD.TOTL.ZS
http://www.indianexpress.com/news/first-official-estimate-an-ngo-for-every-400-people-in-india/643302/1
http://www.telecomtv.com/comspace_newsDetail.aspx?n=49444&id=e9381817-0593-417a-8639-c4c53e2a2a10
Original Post
To read other posts in this exclusive ongoing series, please visit the Mobile Health Around the Globe main page. And if you have a Mobile Health Around the Globe story to tell, please post a comment below or email me at joan@socialmediatoday.com  Thanks!