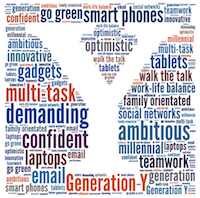 Recent surveys have refined the profile of “Generation Y” and some of the things that healthcare marketing professionals should recognize about reaching the sometimes-elusive, and loosely defined, Millennial Generation include:

Recent surveys have refined the profile of “Generation Y” and some of the things that healthcare marketing professionals should recognize about reaching the sometimes-elusive, and loosely defined, Millennial Generation include:

When demographers say “Millennials” they mean…

Census data has it that there are about 76 million millennials in the US—generally they are 18 to 32 years old, the children of the baby boomer generation born from the early 1980s to the early 2000s (more or less). Labels for the last generation born in the 20th century include Millennials, Millennial Generation and Generation Y.

About 40 percent of this group is African American, Latino, Asian, or a racially mixed background, and about 20 percent have at least one immigrant parent.

Significantly, this super-slice of the American population is growing and, according to Pew Research, “may soon surpass Boomers in size and in importance for many products and services. Marketers are wise about not trying to apply old formulas in marketing to Millennials. [See Millennials in Adulthood, Pew Research]

They value health and happiness, but are concerned about the cost. “Health is very much an ever-present personal journey of wellness fueled by food, exercise and social connections,” according to a national survey by inVentiv Health and Harris Poll. But millennials are more stressed, anxious and depressed than any other living generation.

The inventive/Harris report, Millennial Mindset: The Worried Well, finds “millennials are often perceived as healthier than their Boomer counterparts, but they worry about their health almost exactly as much as Boomers.”

Internet and “Dr. Google” are the PCP of choice. People in this age group have been constantly exposed to computer-based technology and have never known a time without Internet. Sometimes nicknamed the “net generation,” they may be the most tech-savvy generation, and some suggest, use methods of learning that are different from previous generations.

Given that “Millennials are the first generation to grow up with ‘Doctor Google’ at their fingertips.” But with so much discoverable health information, “… it’s never been more difficult for [millennials] to properly screen, analyze and act on the right data.”

In fact, the inventive/Harris report suggests that “37 percent of millennials self-diagnose with health problems that they don’t have,” and that “44 percent say that viewing health information online causes them to worry about their health. Facebook, Friends and Likes; Gen-Y is totally wired. The marketing media of choice reaches millennials plugged into the Internet. Pew Reseach calls them “digital natives,” because they are “the only generation for which these new technologies are not something they’ve had to adapt to.

“Not surprisingly, they are the most avid users. For example, 81 percent of Millennials are on Facebook, where their generation’s median friend count is 250, far higher than that of older age groups.”