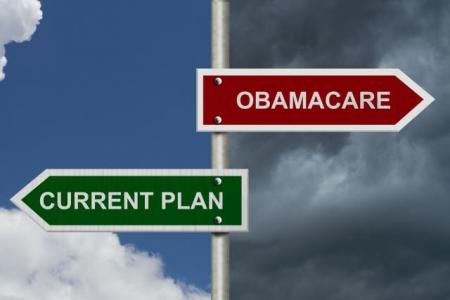 Obamacare: The Next Wave

Employers are already starting to get the same cancellation letters that went to millions of people in the individual market late last year. The Washington Post reports that the big surge should take place in October, but it will happen all through the year as employer plans come up for renewal.

Employers are already starting to get the same cancellation letters that went to millions of people in the individual market late last year. The Washington Post reports that the big surge should take place in October, but it will happen all through the year as employer plans come up for renewal. Contrary to many press reports this affects not just the small group market, but all fully-insured health plans. Very few meet the requirements of “essential benefits” of ObamaCare, which include things like pediatric dental coverage.

The Washington Post article tried to minimize the effects, quoting Jonathan Gruber, one of ObamaCare’s archictects –

“We’re ending discrimination [against people who are sick, and as a result] the people who were previously benefiting may now suffer,” Gruber said. “That’s sad for them, but it does not mean we should continue discrimination.”

He concludes that the number of losers will be “very, very small.” Right.

Writing in the New York Post, Betsy McCaughey does a pretty good job of rebutting Mr. Gruber. She estimates the number of people who will lose coverage is 25 million, which is the same estimate I’ve been using for some time now. But even she understates the problem by focusing entirely on the small group market.

The main difference between the small group market (50 or fewer employees) and the rest of the fully-insured employer market is that the former are exempt from the employer mandate to either provide coverage or pay a fine.

One other difference is that in some jurisdictions the local insurance department is requiring smaller employers to buy coverage through the exchanges. The Washington Post article notes that Vermont is requiring all employers with 50 or fewer employees to buy coverage exclusively through the exchange, while DC is applying the same requirement to groups of 100 employees. We don’t know if other states are doing the same.

In any case, virtually all fully-insured employers will be getting their current plans cancelled. Many will simply comply with the new requirements and pay more for coverage. Many others will make a different decision.

Some may decide to self-insure their coverage. Anecdotally, we hear of relatively small employers (under 100 employees) making that decision and becoming exempt from the ObamaCare coverage mandates. There is no way of knowing how frequently this is happening, but it comes with significant risks. Yes, they may be able to access a reinsurance program to protect against a surge of large claims, but state regulators are already concerned about companies that do this to avoid state requirements. If it becomes common the insurance commissioners might prohibit such reinsurance in their states.

Large numbers of employers may decide they simply can’t afford to pay the additional premiums, especially now that the exchanges are operational. Plus, the exchanges offer a selection of health plans and subsidies that often are more generous than the employer can provide. Employers no longer have to feel guilty about sending their workers out into the individual market and the companies can relieve themselves of the enormous burden of selecting and administering a health insurance program. The savings in the Human Resources departments alone will be substantial.

This decision is a no-brainer for employers not subject to the employer mandate (under 50 workers), especially those with lower wage employees, but also makes sense for a whole lot of larger companies, too. Sure they may have to pay a fine, but that is small potatoes compared to the cost of providing coverage. I would expect the employers of some 50 million workers will make this decision — close to the 30% who told McKinsey three years ago that they would drop their coverage.

So, we may suddenly have 50 million people newly uninsured and looking for coverage. They will have more money in their pockets because their bosses gave them raises to compensate for the loss of coverage. The added income will make them less likely to qualify for subsidies on the exchanges.

Importantly these folks are significantly different than the people who lost their coverage in the individual market. The latter group universally thinks coverage is important and they universally are experienced at shopping and paying for health insurance. They have been doing it for years.

These newly uninsured workers have never done any of that. They have always been passive recipients of whatever the boss has provided. For them the enrollment process has been no more than checking a box and signing their name on a form the company provides. They’ve never had to arrange paying the insurance company; their share of the premium is automatically deducted from their paycheck. If they have a question about what is covered or how to file a claim, they pop into HR at lunchtime to get the answer. If they have a complaint about the services provided by the insurance company, they tell HR and the folks in that department follow-up.

Suddenly they will have to take the initiative to –

Many of them (my guess is half) simply won’t do it. They don’t value the coverage very much. They are actively at work, which means they are busy and healthy. They have other things to do with their time and their money. Even if the process worked will, it would be a hassle –

Where do you find a Navigator? Are they listed in the phone book? Do they really know what they’re talking about? Whaddya mean I can’t see the doctor I’ve used for years? Send me a bill, I’ll pay it when I have a chance. My transmission broke down, can I pay you half this month? My boyfriend moved out, I’m a little short on cash. I just got a raise, why should that change my premiums? I’m moving to Texas, but I’m not sure where I’ll be staying yet.

They ain’t gonna do it. Not going to happen. Welcome to the real world, Mr. President.