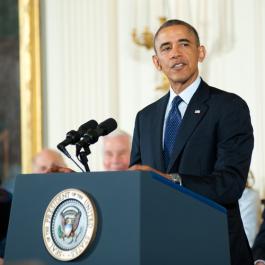 President Obama announced earlier this week that consumers with healthcare plans that do not comply with the new law will be able to renew their plans for another two years. Previously, the extension was believed to be one year at best, so the announcement of a two year grace period came as quite a relief for the million or so Americans with transitional coverage.

President Obama announced earlier this week that consumers with healthcare plans that do not comply with the new law will be able to renew their plans for another two years. Previously, the extension was believed to be one year at best, so the announcement of a two year grace period came as quite a relief for the million or so Americans with transitional coverage.

The basis for the federal decision stemmed from the state level; currently, 23 states accept renewal of previous plans, and this sent a message to Democrats that the expectation for every insured individual to make the change, particularly in light of the health insurance marketplace’s technical difficulties, was an unreasonable one.

While many Americans are relieved to have more time with their current plans, some feel that Obama’s decision was only politically motivated: it is, after all, a midterm election year. But White House officials have insisted the move was simply in response to public outcry; not a political move.

Republicans have commented that this plan will allow young healthy consumers to stay independent, and leave the sick and the elderly to fill the marketplace. Those with chronic illnesses and co-morbid conditions are, by definition, more expensive to ensure than their young, healthy counterparts. While the health insurance marketplace has been geared toward persuading the young and healthy to partake, the fact remains that the Americans who are pursuing healthcare policies may not be young, healthy and employed.

With this in mind, there is concern that premiums for those in the marketplace will skyrocket if the majority of the policy holders are considered “costly” by insurance providers. Therefore, the administration will need to broach the subject of premium stabilization measures if they want to continue to build a rapport with consumers.

Obamacare enrollees are not expected to hit the projected numbers by the end of March’s enrollment period; with the technological hang up back in October, only 4 million Americans have enrolled, falling several million short of the projected enrollment.

Kathleen Sebelius, the Secretary of Health and Human Services under the Obama Administration, has reassured Republicans that the adjustments to the law are within the scope of the law’s flexibility; flexibility that exists to help make the transition easier for Americans who are hoping to acquire plans under Obamacare. Though, many Republican Congress members remain dubious of this claim, further fueling the congressional divide over healthcare.

The actual number of individuals with healthcare plans that are not compliant with the new law is still murky. Insurance companies reportedly sent out 4.5 million cancellation notices, but some consumers have replaced their old plans with new, compliant policies.

This flex approach to policies has a potential to create a greater chasm between individual healthcare coverage: while plans under Obamacare cannot create higher premiums based on an individual’s health, nor can they make healthcare plans any more expensive for woman than men, those individuals who are still holding on to their preexisting plans will be subject to these now passé coverage policies.

Regardless of whether or not the decision was incidentally or intentionally well-timed to coincide with midterm elections, no doubt healthcare will be the “hot topic” of congressional debate as we continue on into 2014.