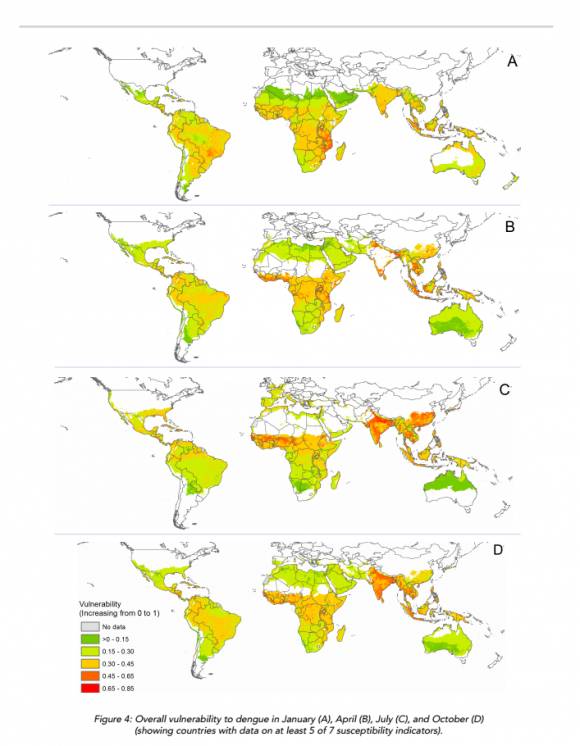 A new report from the UN University’s Institute for Water, Environment and Health points out the potential escalation of Dengue risk due to climate change. The study found that as the world gets warmer, it is getting increasingly friendly for the Aedes mosquitoes to thrive. The map below shows the fluctuations in vulnerability with a change in temperature through the year.

A new report from the UN University’s Institute for Water, Environment and Health points out the potential escalation of Dengue risk due to climate change. The study found that as the world gets warmer, it is getting increasingly friendly for the Aedes mosquitoes to thrive. The map below shows the fluctuations in vulnerability with a change in temperature through the year. As you can see from the image, South and South East Asia are most prone to Dengue, especially in the months of July to October. These are periods when the weather is typically warm and is also characterized by rainfall caused by the South West and North East monsoon winds – a condition that is extremely suitable for the spread of the virus.

Healthcare is one of the many areas where advancement in technology is also pushing the goal post for total success farther. In places like India and China there is a widespread abuse of antibiotics which is typically caused due to overprescriptions. In cases where people consume medicines when they don’t need to fight a pathogen, the antibiotics serve to make the dormant pathogens resistant to antibiotics. These are called superbugs – bugs that are not immune to antibiotics. A study conducted by a non-government advocacy group estimates that nearly 300 million people could die between now and 2050 due to these superbugs.

If there is one similarity in the case of Dengue and the superbugs, it is that of technology abuse. While in the case of superbugs, the issue arises from overprescriptions stemming from financial kickbacks that doctors receive, the case of Dengue is not totally under the control of the healthcare fraternity. Global warming and climate change are phenomena that are caused by the consumption of fossil fuels. While alternative renewable sources have emerged over the past few decades, the use of fossil fuels are still in vogue and shall continue to be for the foreseeable future.

While cutting down carbon emissions is definitely something that is under the purview of governments worldwide, sustainable healthcare should be a priority for those in the industry. Today, most of the advancements that have happened in healthcare are done with the objective of increasing operational efficiency and reducing the health risk on patients. While this is indeed noble, one area that may have not been a priority is achieving these objectives in a more sustainable manner. A heart bypass operation, for instance, is the source of nearly 1.1 tonnes of CO2 emissions. Considering that nearly 400,000 coronary bypass surgeries are performed just in the United States every year, one can estimate the contribution of healthcare towards carbon emissions, which in turn affects climate change.

In the larger scheme of things, the health industry may not ever feature in the top contributors to global warming and the share of carbon emitted is miniscule. However, as an industry that shall be fighting the medical effects of improper technology use – be it in the case of Dengue or the superbugs – the onus is on the health equipment manufacturers to rope in practices that will make the industry more sustainable. In a way then, this is a small way to ensure that the impending health disasters do not strike mankind with the enormity that various studies project them to hit us with.