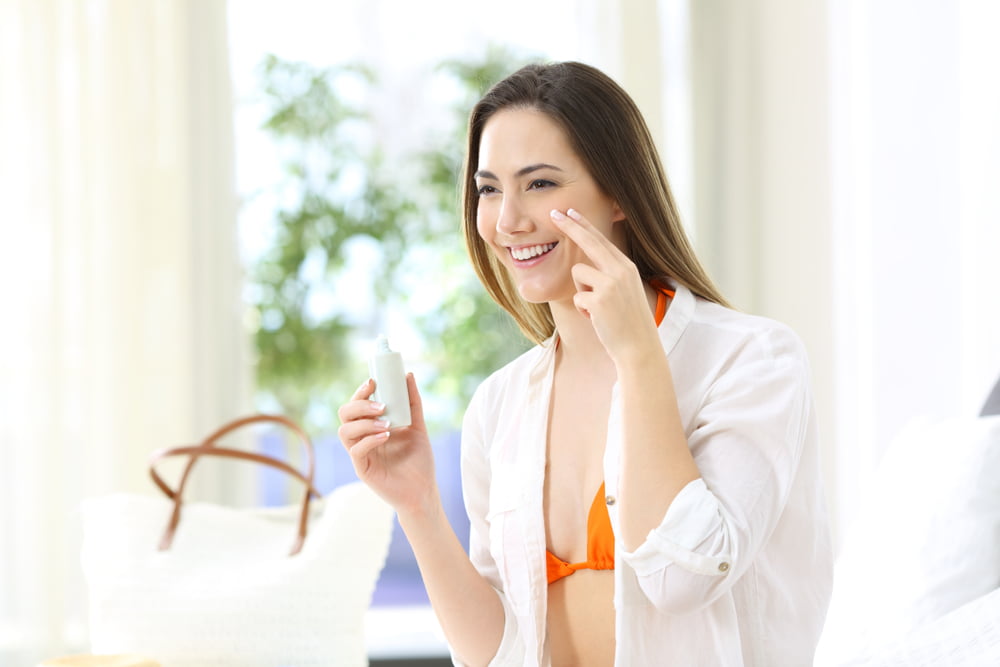 Reasons that You Need To Wear Sunscreen Indoors

A 2019 Realself Sun Safety Report says one out of ten U.S. adults uses sunscreen daily, and the top excuse for not wearing sunscreen is, “I’m not exposed to the sun.” This is a concern for people trying to prevent skin cancer.

Most people are already aware of the importance of wearing sunscreen in the summer months to avoid damage and sunburn. However, Dendy Engelman, MD, a board-certified dermatologist in New York told NBC News that, “It is a common misconception that you only need sunscreen in the summer months but make no mistake: we can get sun damage at any time in the year, including the cold months.”

Many of these dermatologists and other skin experts explain how “crucial” it is to wear sunscreen all year long, even indoors–and here’s why.

Why Is Sunscreen So Important?

According to EHE Health, sunscreen is an essential preventive skincare habit and should be maintained all year round due to the following reasons:

Do You Need To Wear Sunscreen Indoors?

According to Solar Gard, while it is clear that taking sun safety precautions is vital outside, few people don’t realize that they can sustain sun damage indoors, too. There are two types of UV rays that can affect a person’s skin: UVA rays and UVB rays.

Excessive exposure to UVB rays (also called “burning rays”) can lead to sunburns and superficial damage to the epidermis, or outer layer of the skin. UVA rays (or “aging rays”), on the other hand, can penetrate deeper into the dermis–the skin’s thickest layer–translating to more permanent damage.

While both UVA and UVB can harm the skin and lead to skin cancers, UVB, which has a shorter length, can be effectively blocked by glass. UVA radiation, however, because they are longer, at least 50 % of it can pass through your windows.

An article published in Clinical Interventions in Aging reports that eight women and two men had significantly more wrinkles and sagging skin on one side of their face, despite working indoors.

The researchers of the study, led by Philippe Humbert, MD, a Director of the Laboratory of Cutaneous Biology at the University of Franche-Comte, and head of the Department of Dermatology at the University Hospital of Besançon, France, explained that the side of the subjects’ faces which was habitually closer to a window displayed more signs of sun damage (“asymmetrical facial damage”), and ultraviolet A (UVA) rays are thought to be the culprit. The study also elucidated that besides accelerating skin aging, cumulative UV exposure also increases the risk of skin cancer.

In addition, the American Academy of Ophthalmology, featured by Allure, says that apart from being exposed to the UV radiation of the sun, people can also have a significant dose of blue light from indoor lighting and screens.

“One of the reasons that blue light has become a concern is that High Energy Visible (HEV) light, which often refers to blue wavelengths on the spectrum of visible light, not only comes from sun exposure but also from smartphones, computer screens, and other digital devices,” says Dr. Shari Marchbein, a board-certified dermatologist and clinical assistant professor of dermatology at New York University School of Medicine to Allure.

Blue light has been reported to contribute to eye strain as well as glaucoma, cataracts, and other eye diseases. Other than that, a small, peer-reviewed study published in the Journal of Investigative Dermatology in 2010 also discovered that exposing skin to the amount of blue light caught from the sun caused more redness, pigment, and swelling than the same individual’s skin exposed to comparable levels of UVA rays.

Another research published in Oxidative Medicine and Cellular Longevity in 2015 also suggested that exposure to blue light might trigger the production of free radicals in the skin, which can accelerate the appearance of skin aging. There is evidence as well that blue light penetrates the skin, reactive oxygen species are generated, which leads to DNA damage, thereby causing the breakdown and inflammation of healthy elastin and collagen, as well as hyperpigmentation.

However, more research regarding the effects of blue light on the skin is still needed prior to drawing any conclusions. But this early evidence seems to show that it has the potential to be damaging.

Then again, many experts recommended that daily protection against non-deliberate UVA exposure not only outdoors but indoors as well may be an important function of any daily sunscreen. Applying sunscreen should also be a daily habit even in the winter months since snow can reflect up to 80% of UV rays, increasing the risk of exposure to sun damage, according to EHE Health.

The Skin Cancer Foundation also advises using sunscreens with an SPF of 15 or higher, and some combination of the following UVA-screening ingredients: ecamsule, avobenzone, oxybenzone, zinc oxide, and titanium dioxide.

While these products are available in the market, it is also important to be smart when buying sunscreens as many counterfeited products can pop up anywhere, particularly in online marketplaces. Purchasing trusted online pharmaceutical stores like IpharmaHome, will not only guarantee your safety but also prevent any problems in the long run.

How Can Sunscreen Protect Your Skin?

Also known as “mineral” sunscreen, physical sunscreen contains inorganic physical UV filters, like the FDA-approved Zinc Oxide or Titanium Dioxide, that scatter, reflect, and block the sun’s rays before they penetrate the skin. These active mineral ingredients, also called “physical blockers”, are designed to sit atop of the epidermis rather than be absorbed into the skin.

Chemical sunscreens, on the contrary, contain organic (carbon-based) active ingredients made to absorb UV radiation upon contact. They also contain organic substances that catalyze a chemical reaction when exposed to the sun; this reaction turns UV rays into heat, which is then released from the skin.

However, since chemical sunscreens tend to absorb UV rays before damaging the skin, Hadley King, MD, a board-certified dermatologist, cautioned that that absorption could become problematic for the skin. On top of that, chemical sunscreens were also reported to have negative implications for marine life and the environment, which is why Hawaii banned the sale of sunblocks with octinoxate and oxybenzone effective last Jan. 1, 2021.

Understanding the way these sunblocks are made and the ingredients they contain can help you choose the one that is best suited for your skin type.

It might be tempting to skip wearing sunscreen while staying inside, but it is in your skin’s best interest to slather it on and reapply every two hours, just as you often would if it were safe to go outdoors.

Thomas Glare has always wondered why there is so much red tape in many government practices, but he has his own theories, which are only partially substantiated. He also approves of these new measures by the FDA to streamline a process that was out-of-date in its complexity.

RELATED Stories for you
Wellness

Welcome to Summer –and Sun Protection

Get Healthy Without Breaking the Bank

What’s in your medicine cabinet? Every time we click on our TVs, browse the Web

Summer is here. Though cold and flu viruses have mainly subsided, the hot weather