Telemed Isn’t Just For The Young

If you think young people are the only ones ready to embrace telemed technology and healthcare social media, think again! It might surprise you to know that the 60 + demographic of patients in the U.S. are quickly becoming the most eager to embrace the technology.

Telemed Isn’t Just For The Young

If you think young people are the only ones ready to embrace telemed technology and healthcare social media, think again! It might surprise you to know that the 60 + demographic of patients in the U.S. are quickly becoming the most eager to embrace the technology.

With good reason: many of these patients may be housebound as a result of their chronic conditions or, at the very least, are unable to drive to the office. This group of patients is quite eager to embrace remote technology, like Skype and email, as a means of communication to their healthcare providers. It’s not uncommon for these patients to have many doctors, sometimes across several states, and having the ability to communicate effectively without necessarily having to travel is a huge draw. 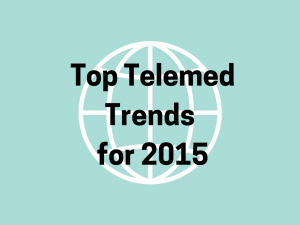 That being said, the young set of patients who have grown up with Skype, instant messaging services and social media are more than happy to embrace the telemed trends as the future of their healthcare. In fact, many of them would probably prefer it: the upcoming generation of adult patients in the U.S. will be more “plugged in” than ever before, and chances are they will come into a doctor’s practice with the expectation that there will be telehealth options.

On the provider end, telehealth services will be a great way to save money, assuming that they can come up with the cost of starting up such services. This seems to be the major concern at present for those practices that haven’t yet integrated the offerings into their workflow. Not only the upfront cost of implementation, but the need to keep abreast of updates (which seem to be constant in tech) is also a factor of resistance.

Even still, most practices are aware that to stay in the game they at least need to hop aboard the EMR train — and a good majority have. So, other than that, what else will define 2015 in telemed trends?

One reason that telemed has really taken off as a concept in the last few years is the overall quality of technology. High speed internet, video chatting programs and not to mention the cast capabilities of our smartphones have really lent themselves to telemed. As it becomes more commonplace for consumers to have access to things like Google Fiber and iPhones no doubt their interest in telehealth options will increase proportionally.

An exciting aspect of telemed is innovation, and perhaps no area of technology has been more fun to watch unfold than that of app development. Whether you’re an Apple or Android user, the number of mobile health apps has increased steadily over the last year. Google, Apple, Microsoft — every major developer has some kind of health app in the game. Of course, there are also many indie developers of personal health tech that are quickly becoming real competition for the big names. Apps like HealthTap and ZocDoc are quickly becoming frontrunners in health app sales.

As webcams have developed over the years, now being featured in practically every cell phone on the market, the ability to chat sort of face to face has become far more readily available than when the technology first cropped up. While it might seem like Star Trek level tech to be video-conferencing with your doctor, the implications for both patients and providers are overwhelming positive: by cutting down on office visits for issues that could be resolved through a phone or video conference, practices are saving money and patients don’t have to make a trip to the office. It’s pretty win-win: that is, assuming that the next telemed trend doesn’t lag behind …

As the technology abounds, the tech we develop to protect health information will need to be developing at the same rate — or, better yet, develop ahead of where consumer technology is. HIPAA compliant software is, of course, the preference among providers, healthcare systems and patients — but certainly some of the technology currently on the market may not have privacy safeguards that are up to snuff with the standards healthcare organizations would suspect. Even though the protection of patient information within a hospital is stringent and monitored closely through an EMR, third party apps will be much harder to regulate. Not to mention that anyone who has ever misplaced their cell phone knows the panic of the potential for it to end up in the wrong hands.

Some of the most popular telemed trends in healthcare have been products that help patients to track various health markers: think of FitBit, which tracks steps taken and other measures of health for an individual patient. This information can be synced with a computer, put into data sheets, and shared with a healthcare provider. This much data isn’t just great for practices, but for the entire healthcare system, which thrives on population health data. With more and more patients actively engaged in quantifying their own healthcare experience — and with the technology making it easier than ever to do this — the population health implications are endless. Not to mention that for providers, hard data will be far more useful at assessing a patient’s adherence to treatment than the patient’s anecdotal evidence: no more lying about how many times a week you work out!